Boris Johnson’s leadership election pledge to recruit 20,000 extra police officers over the next three years will be put into action within weeks, he is claiming.

The prime minister says his drive to deliver more frontline officers – which he has made a top priority – will start in September with the launch of a national campaign led by the Home Office.

Mr Johnson plans to create a national policing board, chaired by new Home Secretary Priti Patel and including senior police chiefs, to make sure forces meet the recruitment target on time. 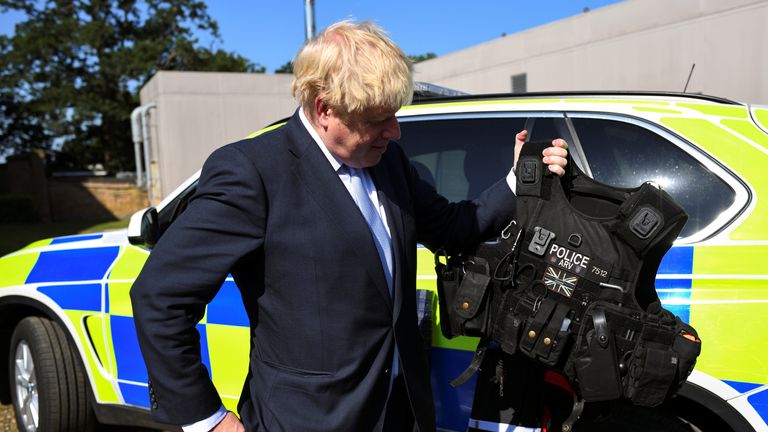 In a further move to tackle the surge in knife crime, Mr Johnson is pledging to give police greater stop-and-search powers, which were reduced by Theresa May when she was home secretary in 2014.

The new PM says the government will urgently review seven current pilot schemes, which make it simpler for officers to use the powers, with a view to extending stop and search to all police forces.

Downing Street says Mr Johnson has been clear he fully supports the police’s use of stop and search to tackle and disrupt those carrying knives.

Ahead of a regional visit to launch the police recruitment drive, Mr Johnson said: “My job as prime minister is to make our streets safer.

“People want to see more officers in their neighbourhoods, protecting the public and cutting crime. I promised 20,000 extra officers and that recruitment will now start in earnest.”

Ms Patel, a controversial choice for home secretary after her previous backing for capital punishment, said: “Officers up and down the country put themselves in danger every day to keep us safe, they deserve our support.

“The rise we’ve seen in serious violence is deeply worrying. An additional 20,000 officers sends a clear message that we are committed to giving police the resources they need to tackle the scourge of crime.

“This is the start of a new relationship between the government and the police working even more closely together to protect the public.”

The PM has appointed a close ally, Kit Malthouse, who was deputy mayor for policing during Mr Johnson’s first term as London mayor, as policing minister at the Home Office.

Other Johnson allies rewarded include Nigel Adams, who scored 125 not out captaining the Lords and Commons Cricket team against MCC at Lord’s in 2013, who becomes sports minister.

But Steve Baker, a former Brexit minister and leading campaigner against Theresa May’s deal, turned down a job at the Cabinet Office.