Boris Johnson explained he doesn’t want the public to be forced to take the knee by protesters. The Prime Minister highlighted that it would be difficult for police officers to do so after being verbally and physically attacked by Black Lives Matter protesters. Mr Johnson suggested he wouldn’t take the knee out of fear it would make another person’s life difficult. 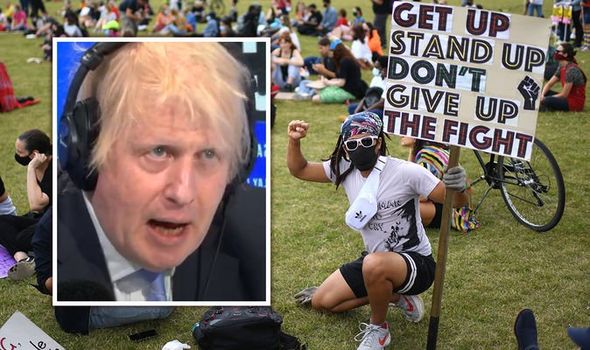 “If you look at what this Government has done over the last few years, when I was running this city, I massively increased black and minority representation in the Metropolitan Police.

“I want to see that happen across the country.

Mr Ferrari pressed the Prime Minister for an answer on whether he would take the knee.

He added: “I don’t want people to be bullied into doing things that they don’t necessarily want to do at any given moment.

“If you think what happened with those police officers standing at the Cenotaph, they were being insulted in quite aggressive terms by some members of the crowd and being told to take the knee.

“Some of them did and it was very difficult then for the others who didn’t.

“I think it’s very important that you don’t do things that make life difficult or embarrassing for others.”