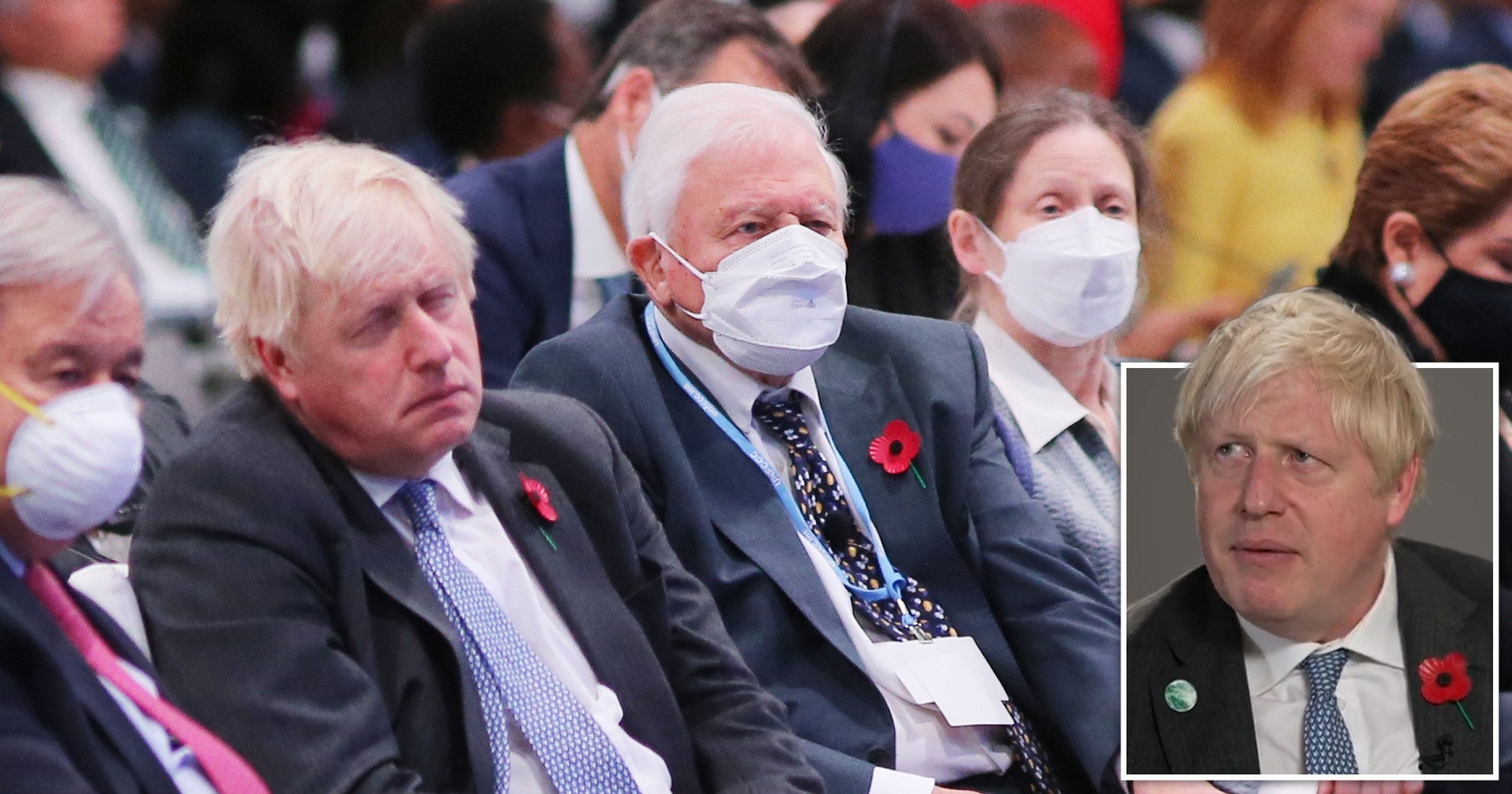 Boris Johnson looked uncomfortable when questioned about why he didn’t wear a facemask while sat next to Sir David Attenborough.

The Prime Minister received widespread criticism for not covering his face in the main auditorium at COP26 in Glasgow on Monday.

He was accused of not doing enough to protect the national treasure, 95, with Covid transmission still high across the country.

Mr Johnson, who himself nearly died from the virus during the first lockdown, said it was ‘a judgment call’ whether to wear a mask or not.

This is despite the rules in Scotland still mandating mask use for adults in most indoor public places.

CNN’s Christiane Amanpour raised the controversy during a sit-down interview with Mr Johnson on Tuesday.

Asked why he wasn’t wearing a mask, Mr Johnson briefly paused and looked confused before he was prompted by the anchor: ‘It was all over the place. You weren’t wearing a mask yesterday sitting next to a 95-year-old national treasure.’

Mr Johnson then responded: ‘I’ve been wearing a mask in confined spaces with people I don’t normally meet.

‘I think it’s up to people to make a judgment about whether they’re at a reasonable distance from someone and whether they’re with someone they don’t normally meet. That’s the approach we take.’

Conservative MPs have been repeatedly slammed for not wearing masks in the Commons chamber since rules in England were relaxed in July.

Some did cover their faces during last week’s budget after weeks of unmasked MPs sat in very close quarters on the Government benches.

It is no longer mandatory to wear face coverings anywhere in England although it is still advised in crowded public places.

Both Mr Johnson and Mr Attenborough addressed the opening of the COP summit on Monday.

Mr Attenborough was also seen not wearing a mask at points during the event and Mr Johnson had been masked up earlier in the day.

However it was the Prime Minister who came in for the most criticism, with many of his political opponents particularly vocal.

The singer from indie band The Charlatans, Tim Burgess, tweeted: ‘If you can’t bring yourself to wear a mask while sitting next to 95 year old David Attenborough, how can you say that you actually care about other people? @BorisJohnson you really should be ashamed of yourself’

Doctor and writer Rachel Clarke added: ‘When you’re sitting next to 95-year-old Sir David Attenborough and you *still* can’t be a**ed to wear a mask.’

Actor and comedian Adil Ray tweeted the picture with the sarcastic caption: ‘Here’s our Prime Minister “leading by example” by sitting without a mask on a global stage in the middle of a pandemic, next to Sir David Attenborough who is 95 years old.’

Mr Johnson has returned to London after end of the two-day leaders’ event which opened the summit.

He said last night that he is ‘cautiously optimistic’ a crucial deal to curb global warming will be agreed at COP.

Delegations from dozens of countries will remain in Glasgow to continue negotiations and Mr Johnson told them the ‘eyes of the world’ will be on them.

Back in London, Westminster has introduced stricter measures within parliament after evidence of increased transmission among staff and MPs.