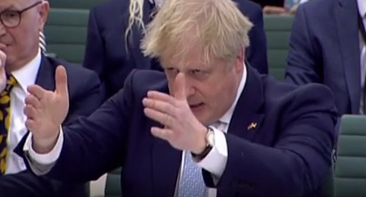 Boris Johnson bemused viewers with a bizarre hand gesture while responding to a question about the UK taking in ‘the right type’ of refugees.

Tory MP Sir Bill Wiggin urged the Prime Minister to let rich Qataris into the country, as he railed against people ‘in rubber boats’.

Mr Johnson held his hands apart in the air while waiting for his party colleague to finish speaking – then pulled them together in a quick shimmy ending with one finger pointing at Sir Bill.

The North Herefordshire MP, who recently declared a Government-paid trip to Qatar worth thousands, sparked outrage as he implied the only refugees arriving in the UK are ‘turning up in rubber boats’.

Speaking at the Commons Liaison Committee, he asked: ‘Why can’t we get the right people through our immigration system instead of the wrong ones?…

‘We want Ukrainians, we want Qataris, we don’t want people in rubber boats.’

The PM appeared to agree with him, saying ‘sure’.

Sir Bill, 55, called for more Qataris to come to the UK because they are ‘very wealthy people who are unlikely to stay’.

The Conservative former minister visited Qatar in February 2020, at the expense of the Gulf country’s foreign ministry – to the tune to nearly £3,000, Parliamentary records show.

Mr Johnson’s gesture sparked mockery on social media, with one Twitter user saying: ‘Fairly sure the Prime Minister has just responded to a question by trying to use magic or some form of curse’.

Others likened the movement to that of a Jedi in Star Wars.

Some 200,000 Brits have volunteered to offer their homes to Ukrainians.

In total, the UK has granted visas to 25,500 people from the country amid the war with Russia.