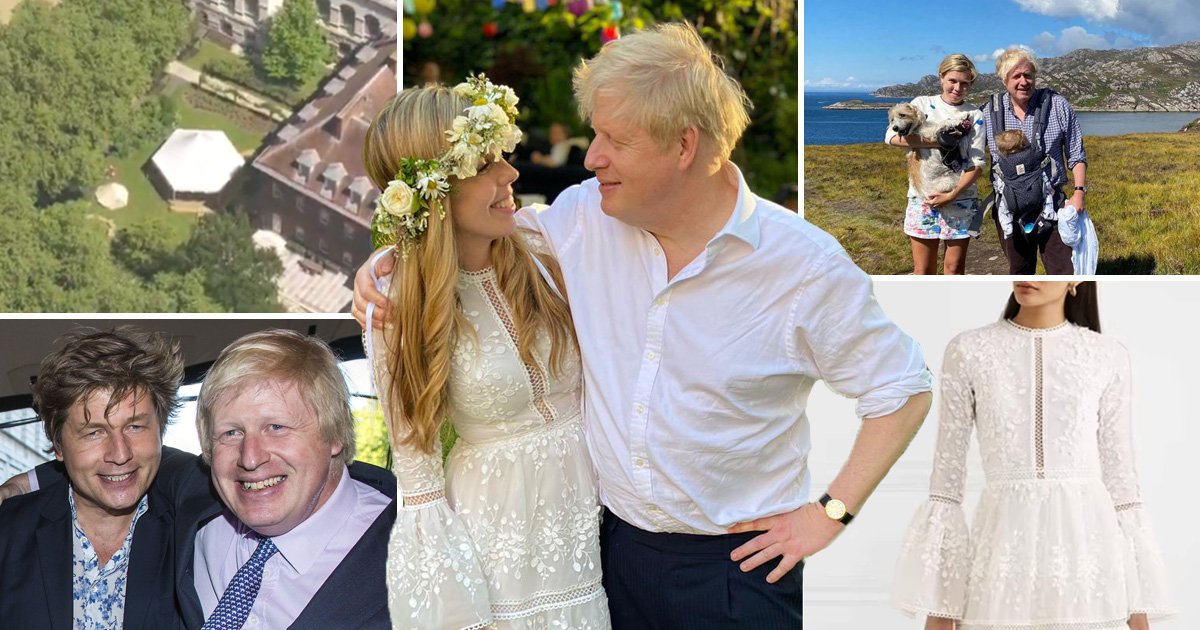 More details about the prime minister’s secret wedding over the weekend are beginning to emerge.

Boris Johnson, 56, and Carrie Symonds, 33, married in Westminster Cathedral on Saturday then partied in Downing Street until the early hours of the morning.

The couple then left London for two days yesterday to enjoy a ‘mini-moon’ by the seaside, The Sun reported.

The paper also revealed how eco-conscious Carrie – who will now go by her married surname Johnson – rented a designer dress worth £2,800 from MyWardrobeHQ for just £45.

The first images from the celebration were revealed yesterday, which showed the PM in a Tory-blue suit and tie alongside his new wife in a long-sleeved hippy-style white frock and flower crown.

Thirty guests – the maximum number currently allowed under coronavirus restrictions – went back to Number 10 for a folk singalong and dancing next to a fire pit, and a ‘best of British’ afternoon tea.

The couple will mark the occasion again with a huge party for all their family and friends in July 2022.

The new Mrs Johnson shared a photo from the wedding on Instagram last night, saying she was ‘very, very happy’ in the caption and thanking her followers for their ‘very kind’ wishes.

The day had apparently been in the diary for months, with all guests sworn to secrecy and told not to reveal the precise details of the celebration.

Boris reportedly also chose his brother Leo as his best man, with his other siblings Jo, Julia and Rachel also in attendance.

It is thought none of Boris’s four grown-up children saw their dad remarry, but the couple’s adored Jack Russell Dilyn was seen at the after-party.

The back garden in Downing Street was decorated with bunting and hay bales in a festival style, and Carrie was pictured barefoot.

The rented dress was the traditional ‘something borrowed’ part of the wedding and Boris’s tie was ‘something blue’.

It is thought however no Cabinet ministers or Conservative MPs were invited to the celebration.

Carrie and Boris announced their engagement – together with the news that they were expecting their first child – in February last year.

It is the PM’s third marriage, having finalised his divorce from his second wife Marina Wheeler in 2020.

He and Mrs Johnson have a son, Wilfred, who was born in April last year.

A Number 10 spokesperson said: ‘The prime minister and Ms Symonds were married yesterday afternoon in a small ceremony at Westminster Cathedral.

‘The couple will celebrate their wedding with family and friends next summer.’