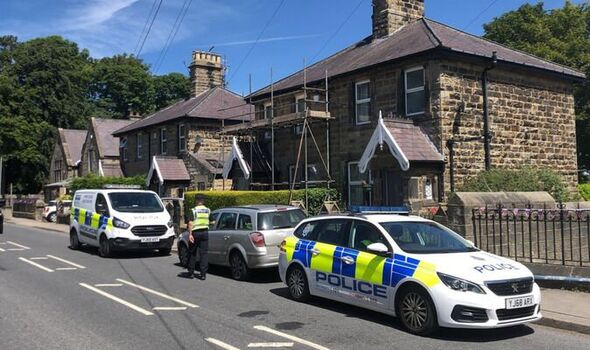 Neighbours in the rural community near Harrogate, North Yorkshire, saw a huge emergency presence at around 8.15am. The victims were found with the injuries, believed to be serious, and taken to hospital.

Police have closed roads in the area but stress the incident is not connected to the nearby Beckwithshaw Community Primary School.

A North Yorkshire Police spokesman said: “We were called to a property in Church Row, Otley Road, at 8.20am today and on arrival found an 11-year-old boy and 40-year-old man with serious injuries believed to be sustained by a bladed article.”

Forensic officers have been pictured at the scene, Yorkshire Live reports.

“It sounded awful. Enough for me to stop and look outside my window,” a neighbour said.

Another said: “It was a case of every available police vehicle in the area coming. There were three ambulances, four or five unmarked police cars, three or four police vans and other three or four marked cars.”

A third resident said: “I have never known anything like this to happen before. It’s appalling that this could happen on your doorstep. It’s a tragedy.”

Roads remain closed in the area as police continue to investigate.