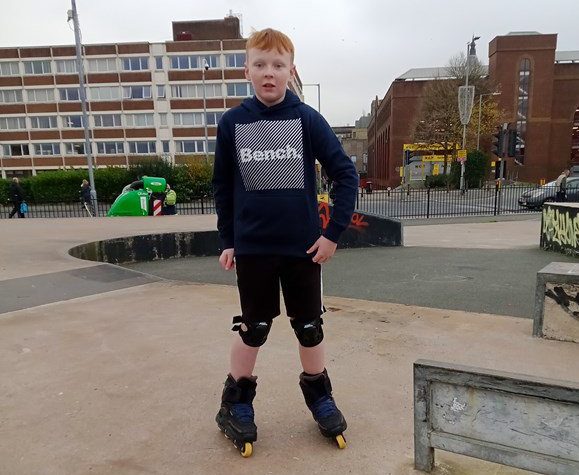 An 11-year-old schoolboy who died after being hit by a bus has been named as Lucas Ashton.

Lucas was riding his bike when he was knocked down on Vernon Street, Bolton, at around 1.40pm on Friday, Greater Manchester Police said.

The youngster was pronounced dead at the scene despite emergency services’ best efforts to save him.

The first released picture of Lucas shows the ginger-haired boy rollerskating at a park.

Police said the bus driver was ‘assisting officers with enquiries’ following the incident and no arrests had been made.

Flowers have been left at the scene of the crash in tribute to the young lad.

A note on one bunch read: ‘Fly high with the angels. Sleep well beautiful. Always in our thoughts.’

Leoni Johnson said she witnessed the aftermath of the horrific crash and described hearing the ‘awful’ screams of who she believed to be the boy’s mum.

She said she ‘couldn’t watch’ as the road became flooded with emergency services.

Ms Johnson said: ‘I went to the shop and by the time I came back the road was flooded with police.

‘I’m a mum too so I couldn’t watch, I had to come inside. We found out on the news that he had passed away. It’s every parent’s worst nightmare.’

She said children in the area regularly ride their bikes along Vernon Street and other roads in the area.

Ms Johnson said: ‘There are so many little kids that play up here, mine included. I can’t imagine what that family is going through.’

Another resident said the incident had shocked the local community.

‘It’s absolutely devastating. It was really eerie and sad yesterday.

‘Even before we knew he had passed away, you just knew. There was a bad feeling. It’s quite a close-knit community.

‘Everyone knows everyone around here. It’s shocked the area. You just don’t think something like this will happen on your doorstep.’

Specialist officers are continuing to support Lucas’s family and loved ones.