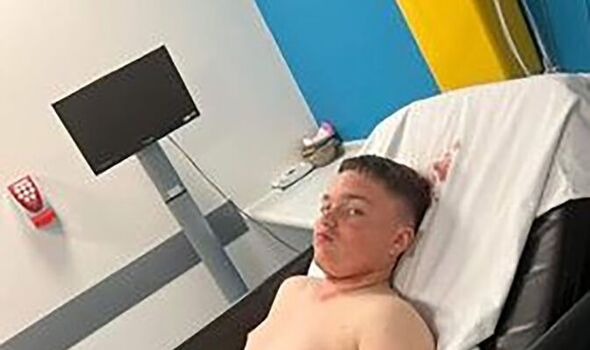 Stevie Taylor-Lovatt, 14, was dashed to hospital with a broken collarbone, a broken finger, concussion and suffered mental trauma after the collision. His family claim a man wielding what looked like an iron bar had come out of the house and was chasing the youngster on Tuesday May 17.

The boy’s parents say Stevie was so terrified, he ran away without thinking where he was going – into the path of an oncoming car in Smallthorne, Stoke-on-Trent.

Steve’s mum and dad, Rebecca and Nathan Smith, are unhappy with how Staffordshire Police have handled the case as the allege the force hasn’t checked CCTV or spoke to any witnesses, including two friends Stevie was with at the time.

Speaking to Stoke-on-Trent Live, Nathan, 32, said: “Stevie was with two of his mates. They went into a garden to get a football. According to witnesses, a guy has come out of the house and chased them into the road.

“Stevie was so scared, he wasn’t thinking about where he was going. He ended up running in front of a car.

“He was unconscious at first (in hospital). When he came round, he didn’t know where he was or what had happened. He said he wanted to go home.

“My wife was frantic when she heard, she was screaming. He could have been killed. I’ve never experienced anything like it, it was awful.”

Stevie needed stitches to cuts on his head and face at Royal Stoke University Hospital.

Nathan said he spoke to the man who allegedly chased the boys, but he denied having chased him.

The dad, from Norton, Stoke-on-Trent, added: “The bloke said the lads ran away when a car pulled onto his drive. He said he didn’t come out of the house. But there are witnesses who say different.

“The police didn’t bother speaking to any of the witnesses or getting their details – there were two in the car that hit him, two in the car behind and the two boys who were with Stevie. They haven’t looked at any CCTV to see what happened.

“It took two days for me to get a phone call back from the police and they said they wouldn’t be able to come and take a statement until nearly a week later. They haven’t done anything.”

Nathan says he has now lodged an official complaint with Staffordshire Police. He said: “I think it’s disgusting.”

Stevie is now off school until after the half-term holiday while he gets better.

He had to miss his beloved Port Vale FC’s League Two play-off as he was in hospital – and he’ll miss the final due to his injuries.

Nathan said: “Physically he’s sore and tired, but mentally he doesn’t even want to cross the road. It’s really shaken him up.

“He had to miss the play-off semi final at Vale – he goes to every game, home and away – and he’ll miss the final because we can’t risk anyone banging into him. He’s really gutted about it.”

West Midlands Ambulance Service confirmed crews attended the scene and treated Stevie. A spokesman said: “We were called at 7.58pm to reports of a road traffic collision involving a car and a pedestrian on Ford Green Road. One ambulance and a paramedic officer attended the scene.

“Upon arrival we found a teenage boy. He had sustained potentially serious injuries. He received treatment on scene and was conveyed to Royal Stoke University Hospital for further treatment.”

Staffordshire Police said officers were still investigating the incident. A spokesman said: “Police were called to Ford Green Road, Stoke-on-Trent, at 8pm on May 17 following reports of a collision. Officers attended as did paramedics.

“It was reported a car and a pedestrian were involved in a collision. A 14-year-old boy was treated at the scene and taken to hospital for precautionary checks. The driver is assisting police with inquiries. Inquiries are ongoing.”