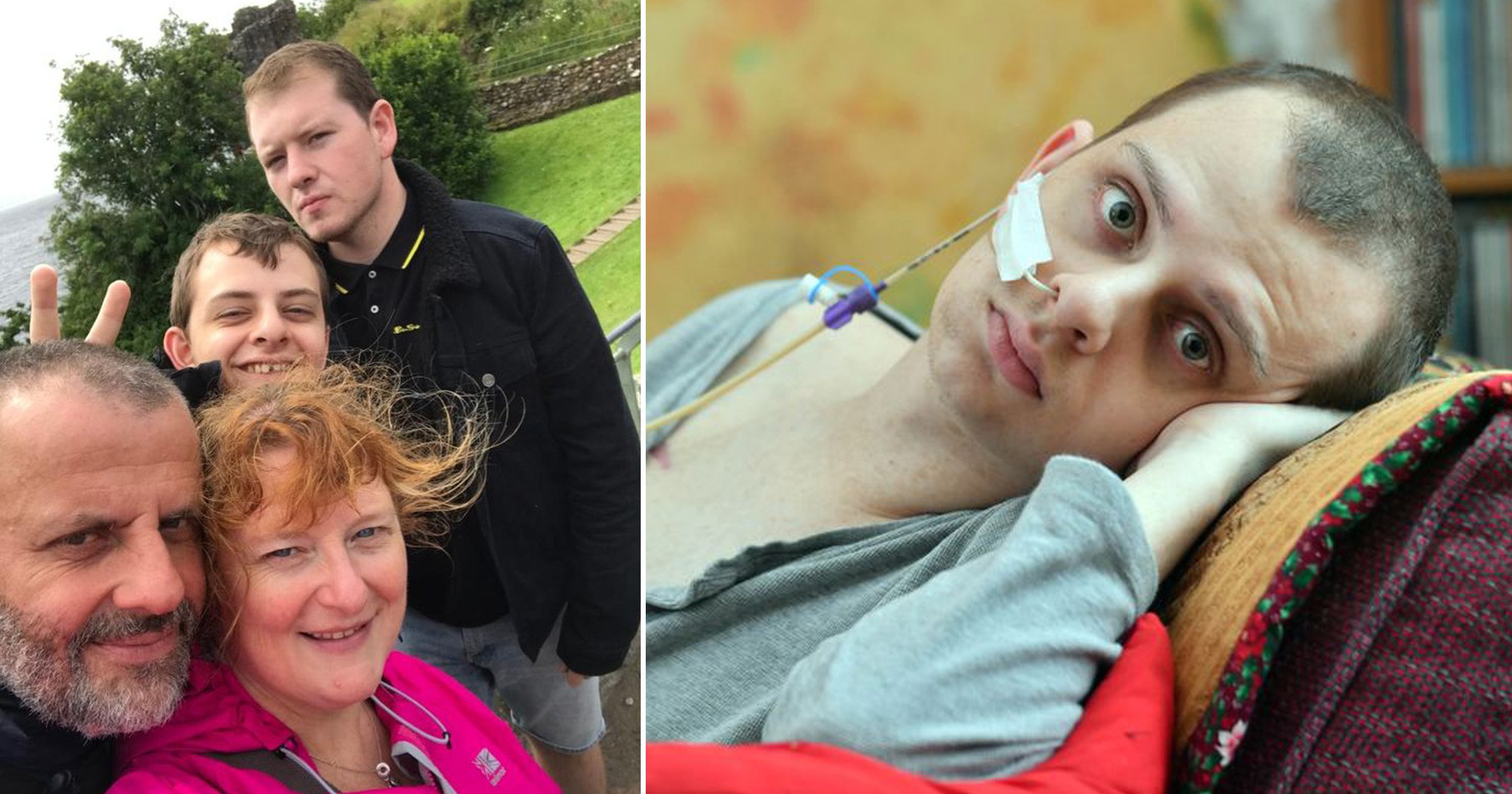 A 15-year-old boy was diagnosed with an inoperable brain tumour after his routine annual MRI scan was cancelled during the pandemic.

Noah Herniman, from Monmouthshire in South Wales, suffers from neurofibromatosis, a genetic condition that causes tumours to grow along his nerves.

The teenager started an 18-month course of chemotherapy shortly after being given the devastating diagnosis back in June, but his mum Shelley says he could have been ‘well ahead’ with the treatment had his 2020 examination not been postponed because of coronavirus.

She said: ‘The heartbreaking thing for us is that now the damage could potentially be done. I have been so angry about that, but how can I blame anyone? There are thousands of people in our position due to the pandemic.’

Noah undergoes annual MRI scans as part of the monitoring of his condition, but the Aneurin Bevan University Health Board was forced to cancel last year’s examination.

It meant that a tumour went undetected and was left to grow in his brain. Although it is benign, and therefore not cancerous, it could still become life-threatening due to its location.

Its position close to Noah’s brainstem, which controls the ability to swallow, means he cannot eat food properly and is now fed through a feed line.

Looking back, Shelley said ‘the signs were there’ as her son had been struggling to swallow since 2019 and appeared lethargic, but the indications it could be a brain tumour were missed.

She added: ‘In 2020, everything was on hold and the scan wasn’t deemed urgent so he didn’t have it. I had chatted with our GP, who is brilliant, about Noah’s gag issue, but a tumour never came up in conversation.

‘Now looking back, I think the signs were there. He was lethargic, he wasn’t eating well, but we put it down to him being at home [from school due to the pandemic].’

Shelley said: ‘I have been angry, trying to get my head around how if Noah had that scan in 2020 he could be well ahead with the treatment.

‘Would we be in a better position had the lockdowns not happened? Yes, of course.

‘In hindsight I wish we had pushed [for the scans earlier], but we accepted that it was part of Covid and I knew how bad it was in our hospitals.

‘I’ve lost friends to Covid, my own sister works in a hospital locally as a nurse, my niece and nephew work in hospitals. I knew the pressures and I think that made me less pushy for the scan for Noah.

‘Now we know that the scan could have been a game changer for us though.’

Shelley said Christmas has been ‘really tough’ on the family seeing Noah enduring the chemotherapy.

But despite undergoing such gruelling treatment, which makes him sick and left feeling exhausted, Noah has still managed to put even more time and effort into his already prolific fundraising work.

The teenager has raised tens of thousands of pounds for charity since he was a young child and raked in more money over the festive season for Women’s Aid.

In a touching show of gratitude, family friends arranged for The Severn Tunnel brass band to play some carols on their doorstep after spotting a comment from Shelley saying she would be missing her church visits.

Chepstow School also organised a Doctor Who day, raising more than £2,300 which was divided between the Brain Tumour Trust and Children In Need.

Staff also knocked on the door just before Christmas to bring the family gifts and cards, and the community has set up a ‘Make Noah Smile’ campaign via JustGiving.

Shelley said: ‘Our community is exceptional. Chepstow School has been so fantastic on a whole different level.

‘It has made Noah’s month. It’s so difficult for him to be sat at home with us when he is so outgoing.

‘Their generosity has made such an impact on Noah, it’s so overwhelming. I don’t have the words to say how thankful we are.’

A spokesperson for the Aneurin Bevan University Health Board said: ‘All routine scans and procedures were postponed across the whole of the NHS at the beginning of the pandemic and sadly this has resulted in some delays with diagnosis.

‘We are sorry to hear that Noah’s condition has deteriorated and our thoughts are with his family.’