The teenager was taken to hospital after the collision last night but medics were unable to save him. The smash happened on a residential road on The Wirral, Merseyside, and the road remains closed today.

The car, believed to be a silver SUV, allegedly failed to stop at the scene after the collision, at around 9.45pm on Monday.

The Liverpool Echo reports a 22-year-old man has since been arrested on suspicion of causing death by dangerous driving and failing to stop after a road accident. He remains in custody for questioning.

The victim’s family has been informed and are being supported by specially trained officers.

Photos show people at the scene and the bicycle remains strewn in the road. 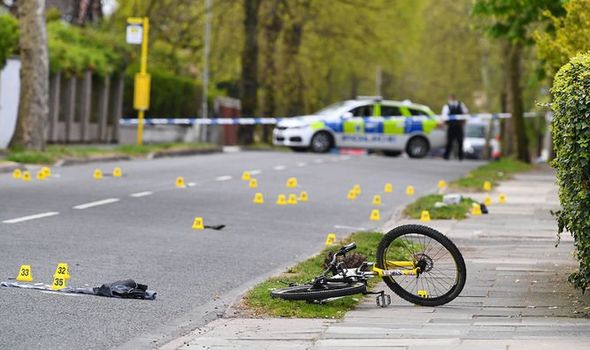 “At around 9.45pm, emergency services were called to Manor Drive, Upton, following reports of a collision involving a car and a cyclist

“The cyclist, a 15-year-old boy, was taken to hospital where he sadly died. The car, described as a silver SUV, failed to stop at the scene.”

The spokesman added: “Following enquiries, a 22-year-old man from Wirral was arrested on suspicion of causing death by dangerous driving and failing to stop after a road accident.

“He remains in custody for questioning. “