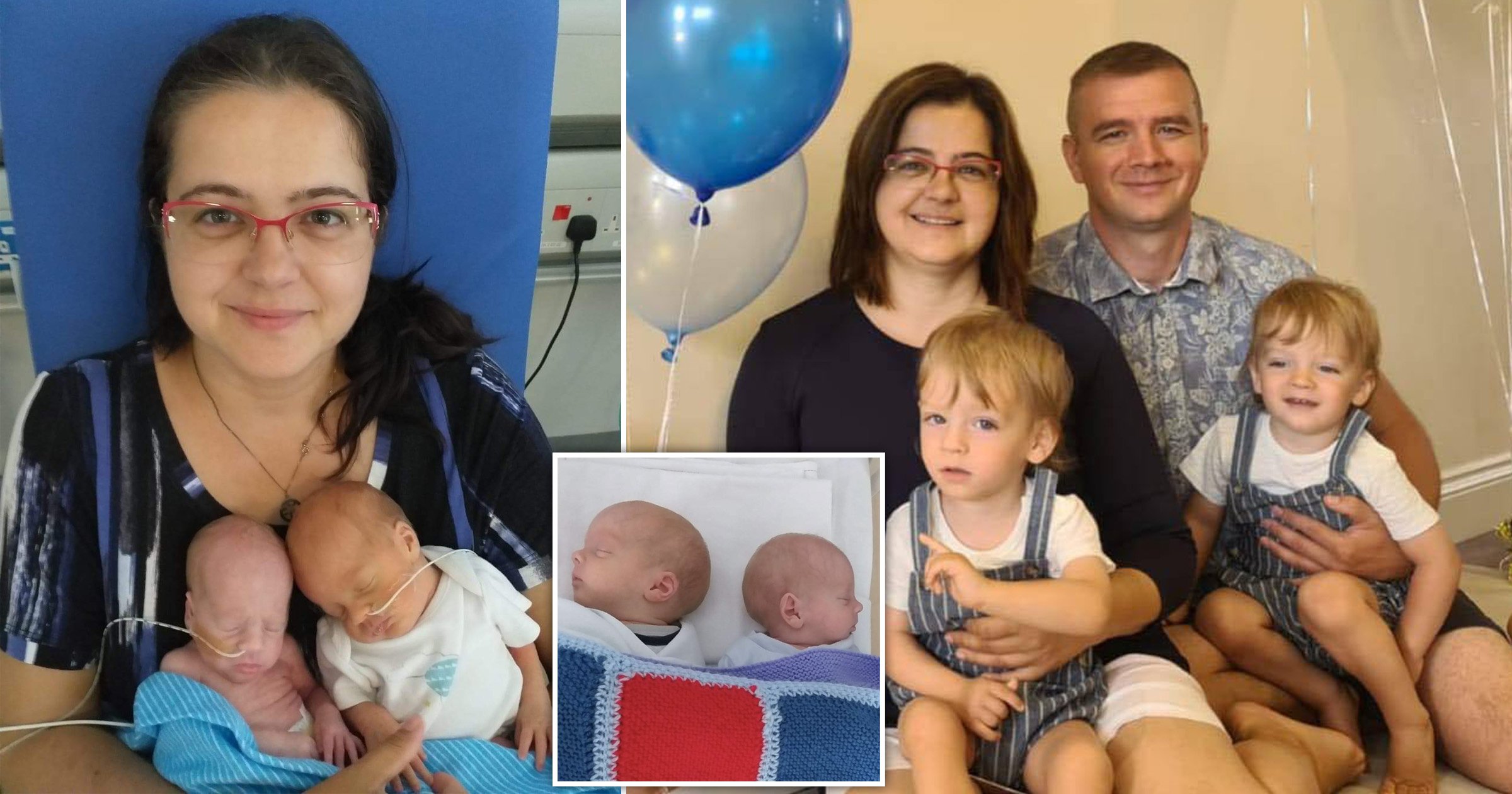 Dumitru Hristianovici and his identical twin, Filip, share so many similarities from their blonde hair and blue eyes to their cheeky smiles which light up a room and their love of storybooks.

But there is one big difference between them that sadly means the boys, two, can’t play with or talk to each other.

The brothers were born prematurely at 29 weeks due to a rare condition called Twin Anemia Polycythemia Sequence (TAPS) which occurs when there are unequal blood counts in the womb.

The disease, which affects around 100 in a million pregnancies, deprived Dumitru of the necessary oxygen and nutrients to develop properly.

He also suffered a stroke while the twins’ mum, Marieta Toleva, 40, was pregnant, causing brain damage and leading to him being diagnosed with cerebral palsy, affecting the right side of his body.

As a result, Dumitru is further behind on his development compared with Filip and is unable to walk, talk or play with his twin.

Now Marieta and dad Gabriel Hristianovici, 35, from southeast London, have launched a fundraising campaign to help pay for Dumitru’s treatment, which costs around £1,200 a month.

The twins were born at St Thomas Hospital in central London on June 26, 2019 with Dumitru weighing just 900g, just under 2lb, while Filip weighed 1.3kg or 2.8lbs.

They spent five days in a neonatal unit before being transferred to their local hospital, Queen Elizabeth in Woolwich, southeast London, where they stayed for two months.

‘Having the boys so early and Dumitru’s cerebral palsy, was not what he hoped for, but we are grateful they are both alive,’ Gabriel told Metro.co.uk.

‘It was very hard to spend two months in hospital but the fact that both survived gave us hope and kept us strong.

‘The privilege of being parents of twins gave us power,’ the proud dad added.

‘Those little versions of us gave us power and strength and we went forward.

‘We had to – it was the only way,’ Gabriel continued.

‘The most difficult week for us was when we found out Dumitru had brain damage due to a stroke while he was in (his) mum’s belly.

‘The doctors told us that only time will tell and he couldn’t make any prognosis regarding his recovery, but assured us that babies are fighters and we have to fight with (Dumitru) as well.’

But it is an ongoing challenge trying to juggle the boys’ different needs, Marieta told Metro.co.uk.

‘We can’t go to the playground alone because one of us is running after Filip and at the same time Dumitru has to have someone with him constantly.

‘Dumitru is getting frustrated, he wants to crawl when Filip is walking, he doesn’t understand.

‘Filip sometimes asks “why do you carry Dumitru in your arms, why don’t you carry me as well?”’

Dumitru has started commando crawling and positioning himself on all fours – which is a ‘step forward in terms of mobility and building his muscles’, Gabriel said.

He is also flipping pages of a book and putting puzzle pieces together.

The toddler can also say yes and nod for no.

And despite their differences, Dumitru and Filip have ‘amazed’ their parents by proving they have a bond that only twins can share.

‘I remember once Filip bit his tongue and started crying, and Dumitru, who was upstairs, started crying as well without any reason.’

Gabriel and Marieta have coped largely without the help of their immediate families, who live in Romania and Bulgaria respectively.

‘We don’t treat him differently to other children, this is what gives him confidence, it is very, very important to be positive,’ he said.

‘Each small victory is a step forward and keeps us going,’ Marieta added.

‘It is more strength that adds up to the strength they have already given us, it gives us more power to keep going.’

Dumitru’s future development remains ‘unknown territory’ and depends on how he responds to physiotherapy, doctors have told the family – but they hope he will eventually be able to live an independent life.

The family launched the GoFundMe crowdfunding page in the hope of paying for a Galileo Vibration Plate, a specialist piece of equipment which can help children with cerebral palsy enjoy stronger bones and mobility, costing £5,605.

Gabriel, who is a full-time dad to the boys, and Marieta, an accountant, must also find the cash for physio, occupational and speech therapy and fortnightly appointments with a cranio-osteopath, adding up to around £1,200 a month.

‘We can’t do it anymore with our money. All our savings are gone,’ Gabriel said.

Gabriel and Marieta say Dumitru has made ‘big progress’ thanks to the help of physiotherapist Dr Jose M. Sanz Mengibar at Vojta Therapy.

The family have also received support from Stephanie Ernst, founder of the Taps Support Foundation, who has first-hand experience of the condition.

For more information and to donate to help Dumitru, click here.