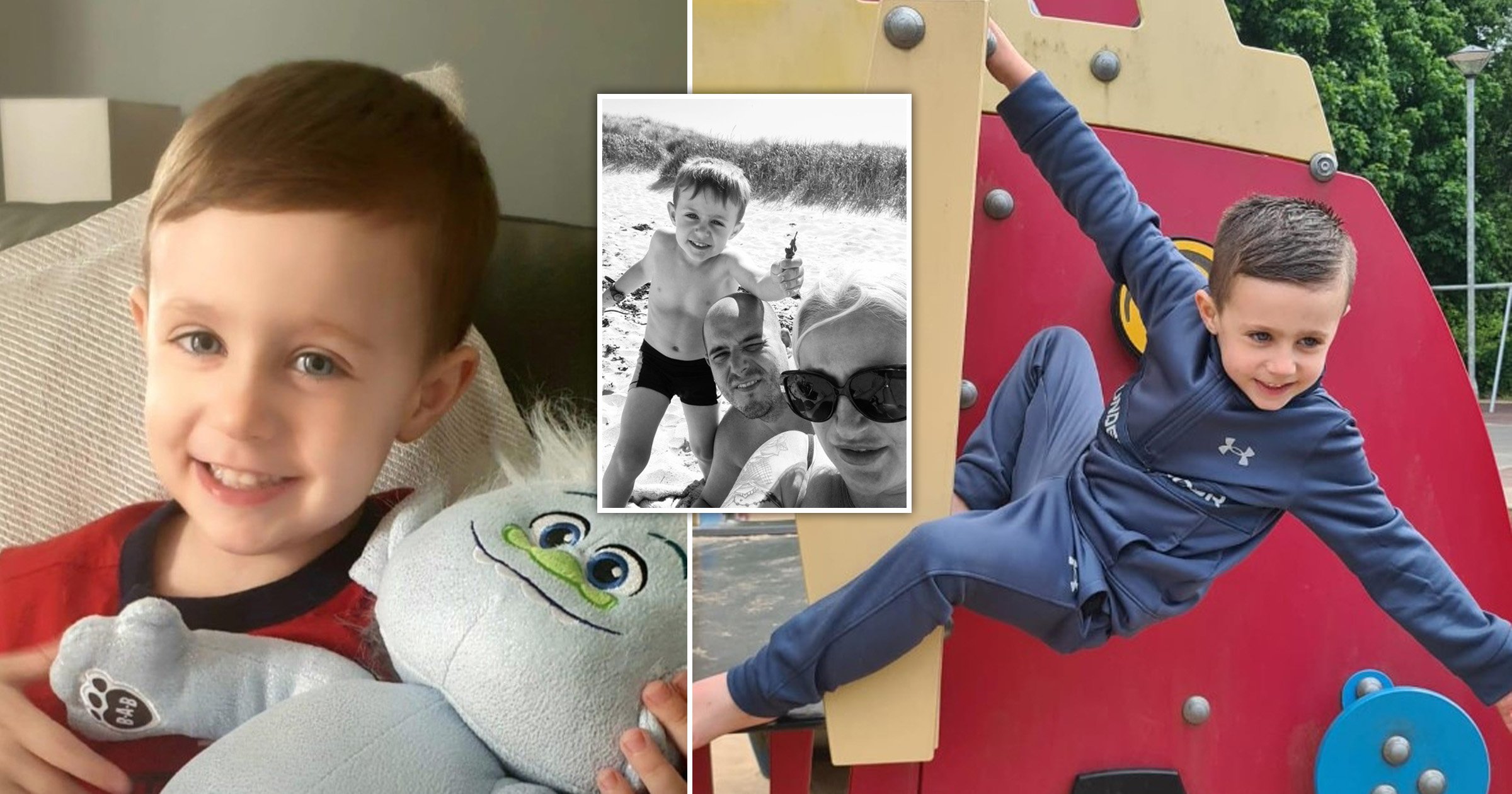 A young boy tragically died in an accident involving a large helium balloon the same size as him.

Karlton Noah Donaghey, 5, was found on the floor of his home in Dunston, Gateshead, with the dinosaur-shaped balloon over his head and neck.

His mum Lisa, 43, found him after going in to check on her son after he didn’t return to the garden from going to use the toilet indoors on June 23.

‘When I came in he was on the floor with the balloon over his head and his neck. It was a dinosaur balloon which was the same size as him,’ the mum-of-four said.

‘I think he’s put himself in the balloon to be a dinosaur to go outside and surprise his nieces. I pulled the balloon off him and I screamed.

‘I think I carried him to the patio door. As a mother, I knew he was gone, he was unresponsive. He had his eyes wide open and he was pale.’

Karlton was given CPR before he was airlifted to the Royal Victoria Infirmary in Newcastle-upon-Tyne, in Tyne and Wear.

The boy spent six days in intensive care before his ventilator was switched off at The Great North Children’s Hospital.

Lisa, who is also mum to 25-year-old Kaitlin, 20-year-old Joe and 15-year-old Will, said she bought Karlton the huge green balloon as a gift during a trip to The Hoppings funfair in Newcastle the previous week with his dad Karl, 35.

‘He had been really well behaved and he hadn’t asked for anything, he was never ungrateful,’ said Lisa. ‘He was really well-mannered so he got a treat.

On the day of the accident Lisa’s daughter Kaitlin and her eight-month-old twin daughters, Renàe and Tiànna Hodgson, were visiting.

Kaitlin and Lisa’s neighbour, Amiee Morrison, carried out CPR on Karlton while the family waited for an ambulance to arrive.

‘I couldn’t bear to come back in. My little boy was getting worked on. I was numb with fear and terror.’

She said she wouldn’t leave Karlton’s side while he was in intensive care.

‘I remember a consultant stating that he was in a really bad way… I just hit the floor, I couldn’t get up,’ Lisa added.

He started to suffer seizures and doctors said there was nothing more they could do to save him, so his ventilator was switched off on June 29.

‘I read to him and I sang to him,’ his mum said. ‘I washed his face, his fingers and his hair. I put Vaseline on his lips and I made sure he was clean.

‘He was trying to fight on but I knew he was fighting with a little ounce of energy, it was taking it all out of him.’

She said she lay in bed with him cuddling him until his heart stopped: ‘My little boy just went to sleep and he looked so beautiful.

‘I knew as a mother I wasn’t going to bring him home. I’m just grateful to have had the six days with him.’

After his death Lisa bought a Dachshund puppy and called him Fudge after the giraffe mascot at the hospital, as she had promised to get Karlton a dog while he was in intensive care.

It is thought Karlton died from helium poisoning, though this has not yet officially been confirmed by a coroner.

Lisa warned: ‘It’s a toxic that can take a life in seconds. It’s very dangerous.

‘It’s taken my son’s life, he was just wanting to playfully be a dinosaur. It can take a child’s life and it can take an adult’s life.

‘I want parents, grandparents, childminders, adults, students, anyone that has come into contact with helium to be cautious about the ways they use it and dispose of it.

‘A precious five-year-old has been taken too soon and I would never ever put this pain on anybody.’