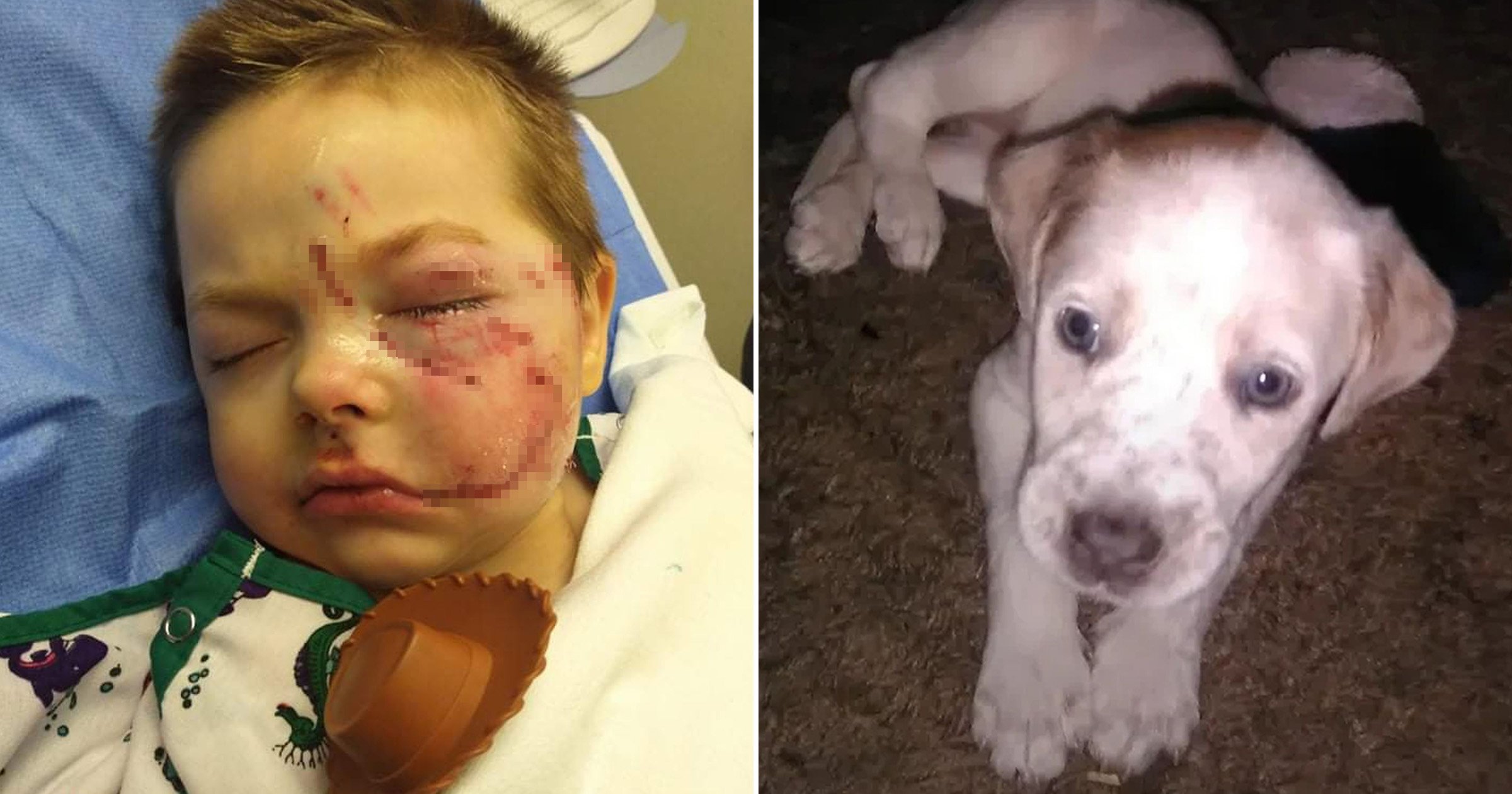 A heartbroken family had to have their ‘sweet’ dog put down after she ripped the cheek off a five-year-old boy.

Brantley Manion had grown up with Marley after she arrived as a puppy when he was two.

But it ended in tragedy when she attacked him, leaving him with torn ligaments and unable to smile.

Despite the attack, he still wanted to forgive his pet and told his parents that ‘she didn’t mean to’.

Brantley had settled down in his bedroom to watch a Disney film on January 8, alongside the Mountain Cur English Pointer cross.

His mum Amanda, 35, believes the attack could have happened because the dog was eating some steak and when Brantley went to pet her, she may have thought he was trying to take the food.

Amanda was sitting in the living room with tree surgeon fiancé Christopher, 34, when they heard screams coming from the bedroom.

They rushed upstairs and found the dog pinning down Brantley and viciously attacking him.

The couple have had Marley since she was just nine weeks old and say she was the ‘sweetest and most protective’ part of the family who had never previously been aggressive.

Horrifying photos show Brantley with deep cuts to the right side of his face and stay-at-home mum Amanda says that his teeth could be seen through his torn cheek.

Brantley has undergone one surgery and needs a further one to stitch up torn ligaments in his mouth, as he is still unable to smile properly.

Amanda, from, Wentzville, Missouri, said: ‘Christopher pulled her off and Brantley was laying there holding his face together.

‘It didn’t hit me that it was Marley, I thought the bunk bed must have fallen on him, I couldn’t believe that Marley would have done that.

‘We had steak for dinner and my husband had put some in Marley’s dish.

‘Marley grabbed her steak and sat in the middle of Brantley and my daughter eating.

‘My daughter said that when Brantley went to pet Marley, all of a sudden, she pounced on him.

‘The surgeon thinks that it could have been the steak and maybe she thought Brantley was going to take it. But I find it hard to believe because Brantley has taken food out of her dish and put food in her dish before.’

Although Brantley forgive Marley, the family made the decision, as advised by police, to have her put down.

Amanda said: ‘We knew we couldn’t keep her. The kids wanted to say goodbye but we couldn’t let them get close to her.

‘I told the kids she’d been taken to sleep. They are devastated, especially Brantley. He asks about her all of the time.

‘He wants her back but there’s nothing I can give him. He doesn’t want another puppy, he wants Marley. He just remembers the good times.

‘He said “Marley is sorry and she didn’t mean to”. It’s so sad, he just wanted to forgive his dog.’

Brantley and his siblings Mckenzie, 13, Isabella and Wyatte, both 10, had to work hard to persuade their dad to let them get a dog due to him being attacked as a child.

Amanda and Christopher have set up a fundraiser as a three-hour operation to stitch up the lacerations and one week in hospital has left them with a $16,000 hospital bill.

She doesn’t know if Brantley will be scarred for life or how many more operations he’ll need as his mouth is paralysed on one side due to torn ligaments.

Amanda said: ‘He needs more surgery because he can’t smile. His mouth was completely in half so they had to reconnect the corners of his mouth.

‘I need to catch up on payments for the first surgery before he has another.’You can donate to Amanda’s page here.