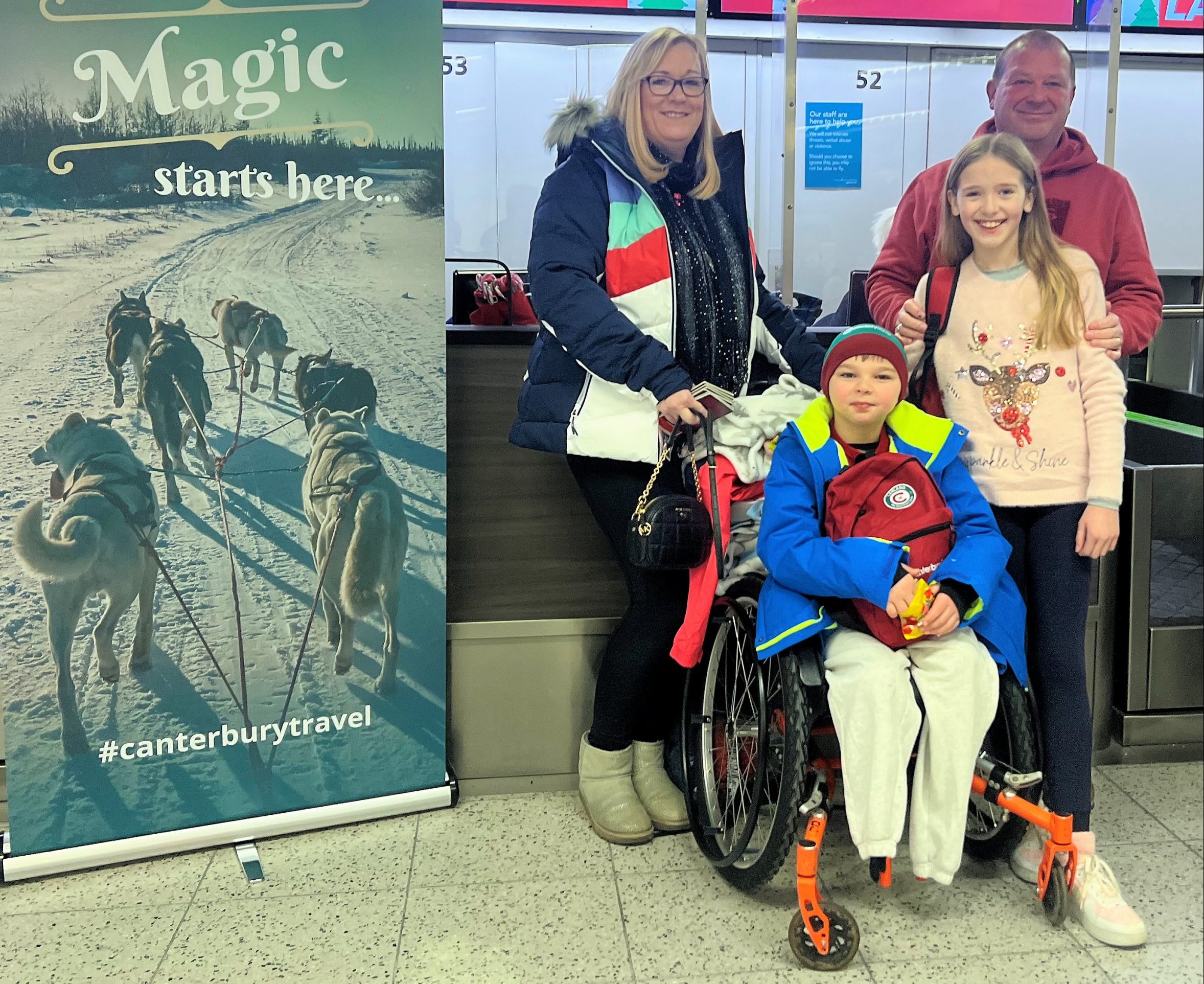 A boy who lost both of his legs because of abuse and raised £1.8 million through fundraising is off to Lapland to meet Santa.

Tony Hudgell, 8, revealed his excitement as he jetted off from Gatwick Airport yesterday morning.

He said he can’t wait to get into the festive spirit by meeting elves, reindeer and of course searching for Santa in the snow-covered forests.

He told MailOnline: ‘I cannot wait to see the elves and Santa and it’s going to be the best time ever.

‘I’m looking forward to seeing the reindeer too.’

He is flying out with adoptive parents Paula and Mark Hudgell and their three children. They will all be staying in a log cabin.

He’s been hailed as a hero by Prince William and Kate Middleton over his fundraising walks to help vulnerable children, and received a touching letter from the princess.

He set out to raise £500 for the hospital that treated him in 2020, but ended up smashing the target.

A foundation has now been set up in his name to help children who have suffered physical, emotional or psychological abuse.

Father Christmas is set to present Tony with a £5,000 cheque to the foundation in Lapland.

The youngster had a horrific start to life, which led him to undergo 23 operations and eight blood transfusions.

He was rushed to hospital in 2014 when he was just 41 days old after abuse by his biological parents Jody Simpson and Tony Smith.

They were found guilty of child cruelty in 2018, and are both serving 10-year prison sentences.

Both have mounted a legal challenge after justice secretary Dominic Raab intervened in a bid to keep them behind bars.

A hearing took place last week in the High Court and the family are awaiting a ruling which they hope will see the pair remain behind bars.

His adoptive family has successfully campaigned for longer sentences for anyone who seriously harms a child, called Tony’s Law, and are now calling for a register of abusers.

Paula – who has been fighting her own battle with bowel cancer and underwent emergency surgery just six weeks ago – said: ‘When he found out about the trip Tony was just so excited. He always wanted to go and meet the real Santa – he’s just super excited.

‘There has been quite a countdown over the last few weeks.

‘He’s most looking forward to the snow and the huskies and hopefully we’re going to find Father Christmas.

‘It will be really really nice. They have a kick sledge for Tony so that it will be accessible for him. It’s like a seat on skis that someone can push him along on.

‘It really is going to be the trip-of-a-lifetime. It’s been on my bucket list forever.

‘All of us have always spoken about Lapland. It’s always something we wanted to do but we’re never able to do. We can now – and it’s absolutely incredible, just wonderful.’

She added Tony is continuing with his fundraising and said: ‘We have a Christmas present appeal going. Last year we managed to gift 700 presents to vulnerable children. We’re hoping to do that or more again this year.

‘Tony is lucky although it’s come at a huge cost.

‘There are so many children out there that sadly aren’t in his position and if he can spread a bit of magic for their Christmases as well – that’s what we hope to do.’