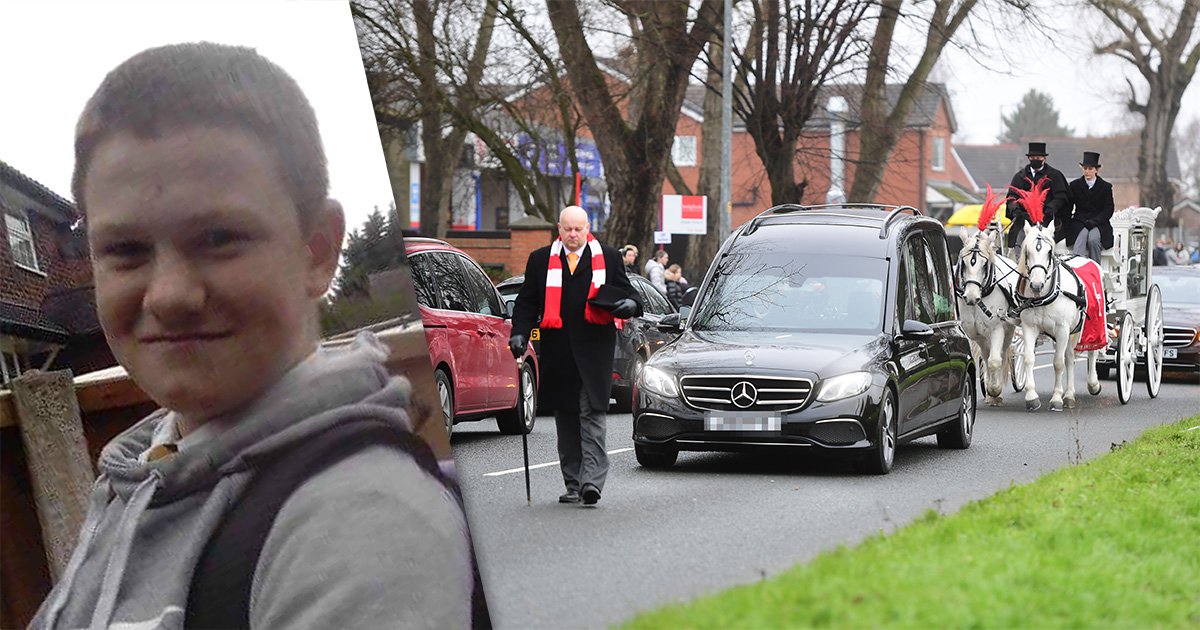 A 12-year-old boy died after suffering an allergic reaction to his family’s Christmas dinner which contained nuts, an inquest has heard.

Cason Hallwood, from Winsford, Cheshire, died in hospital after falling ill while playing with his friends at a park on Christmas Day last year.

The schoolboy, who suffered from asthma, began having trouble breathing not long after having dinner at his grandparents’ house.

An inquest into his death heard his granddad, Albert, had cooked the meal and had ‘completely forgotten’ about his nut allergy.

In a statement, read out by the coroner yesterday, be said his ‘heart sank’ as he realised the glaze he’d used contained nuts.

Despite Cason’s mum Louise running to the park to administer his EpiPen, her son died after going into respiratory and then cardiac arrest.

The boy’s mum told the inquest how the family had sat down to eat dinner at around 2.25pm and that Cason had ‘licked his plate clean’ before going to meet friends.

About 20 minutes later, Louise said Cason phoned to ask if one of his brothers could cycle over with one of his inhalers.

She added: ‘He was back in about 10 minutes and he said he seemed fine. My phone went again and this time I could tell that the inhalers hadn’t worked.’

Louise ran to the park with an EpiPen they kept at Cason’s grandparents house, which unlike the one at her home, was out of date.

She asked 999 call handlers for permission to give the expired shot. The inquest, held in Warrington, heard it wouldn’t have had a harmful effect, but it may have been weaker.

Louise said she was ‘panicking’, as there were a few minutes of confusion as the ambulance arrived at the wrong entrance of Wharton Recreation Park.

She added: ‘Cason was saying “I can’t breathe, I’m going to pass out” and I was screaming “help him”.

‘I then got out the back of the ambulance, I don’t know why, I just couldn’t take it anymore.’

Louise and her mum Helen went to Leighton Hospital, where medics told them they were still working on Cason but that ‘it was not looking good’.

She added: ‘They said if there’s no sign of life, I would have to go and say goodbye. I just could not bear it but they told me that nobody should die alone.

‘At this point I was in shock and did not know what was going on. They took me into resus and I saw them working on him. I knew then he was gone.’

While they were at the park, Helen had spoken to Albert and had asked him ‘what he’d done with the food’.

In a written statement, read out by senior coroner for Cheshire Alan Moore, Cason’s granddad said he had ‘completely forgotten’ about the boy’s nut allergy.

He added: ‘I remember Cason licking his plate clean and saying “granddad that was lovely”.’

Around an hour after going out to play with friends, Albert’s wife Helen told him Cason couldn’t breathe properly.

He added: ‘As a family we are completely heartbroken. Life will never be the same again.’

The family questioned the length of time it took paramedics to get to the scene and why the ambulance had initially gone to a different entrance.

After arriving, he says a young man on a bike came over to them and told them there was another entrance.

He said the confusion would have cost them ‘no longer than four or five minutes’.

The inquest heard that Cason had been on multiple treatments for his asthma and had required several visits to the doctor in 2020.

His nut allergy was first diagnosed more than 10 years ago, and Louise said she never kept any nuts ‘of any description’ in the house.

A post-mortem concluded that Cason died as a result of anaphylactic fatal asthma caused by peanut ingestion, with collapsed lungs as a contributing factor.

The coroner said he was on duty on Christmas Day and can remember taking a number of calls about it.

He said: ‘On that day, my heart really went out to you. I couldn’t even imagine what you were going through as a family.’

‘This is a heartbreaking story. I can only say that as a family you have displayed, not just today but throughout since last Christmas, courage and dignity on a scale that I have never seen before.’