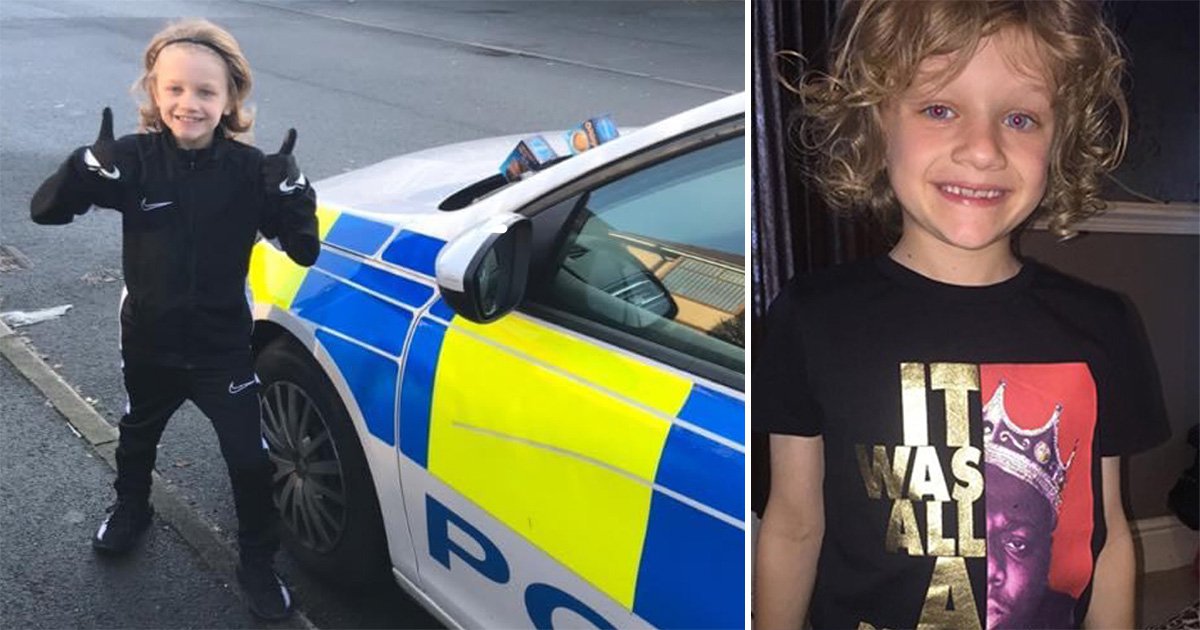 A nine-year-old boy who died after being struck by lightning would leave chocolates on police cars to cheer up officers.

Jordan Banks was hit during a freak thunderstorm while playing football in Blackpool, Lancashire, at around 5pm on Monday, and later died in hospital.

The little boy has been praised after it emerged he raised £3,000 for a mental health charity in memory of his uncle earlier this year.

And now police in Blackpool have revealed Jordan left sweet treats on their cars during lockdown to raise their spirits.

Officers posted a picture of Jordan in January thanking him for the gesture.

They wrote: ‘Blackpool Team 3 have done some investigation work and managed to track down who has been leaving sweet treats on our vehicles.

‘We want to say a massive thank you to Jordan! You have most definitely cheered us up today.’

‘We lost the brightest star our beautiful boy Jordan. His laugh, that infectious smile, golden curls, he was our everything.

‘Wise beyond his years, caring, considerate, generous and so loving. Our love is endless. Goodnight beautiful boy.

‘We thank you all for your kind words and support but as a family ask that you respect our wishes and privacy.’

Blackpool Tower was lit up red in honour of Jordan, who was a Liverpool fan, while footballers and clubs paid tribute to him on social media.

Liverpool FC said: ‘The thoughts of everybody at Liverpool Football Club are with Jordan’s family and friends. Rest in peace, Jordan Banks,’ while Liverpool midfielder James Milner added: ‘A special boy taken far too soon.’

Two GoFundMe pages have been set up in memory of the youngster, with one raising more than £44,500 by Wednesday evening from more than 2,500 donors.

One page praised Jordan’s charity work, adding: ‘There are no words that could possibly be written to begin to explain the pain the family of Jordan must be feeling.

‘After raising £3K for Counselling in the Community just this year, in memory of his uncle, it’s now time for us to come together as a community and help give back to such an incredibly, thoughtful and caring young lad who has been taken way too soon in a tragic incident.’

Jordan was described as ‘a shining light and inspiration to everyone’ by his football club.

The Clifton Rangers Junior Football Club said: ‘It is with great sadness and a very heavy heart we announce that the tragic incident yesterday involved one of our own players.

‘Jordan of our U9 Bees, tragically passed away yesterday evening doing what he loved.

‘Jordan was a shining light and an inspiration to everyone that he met.

‘A strong, determined and courageous young man, who will be missed by everyone.

‘The world has truly lost an extraordinary young man, who had done so much good in his community.’

Flowers, football shirts and messages of condolence were today left at the field in memory of the football fan.