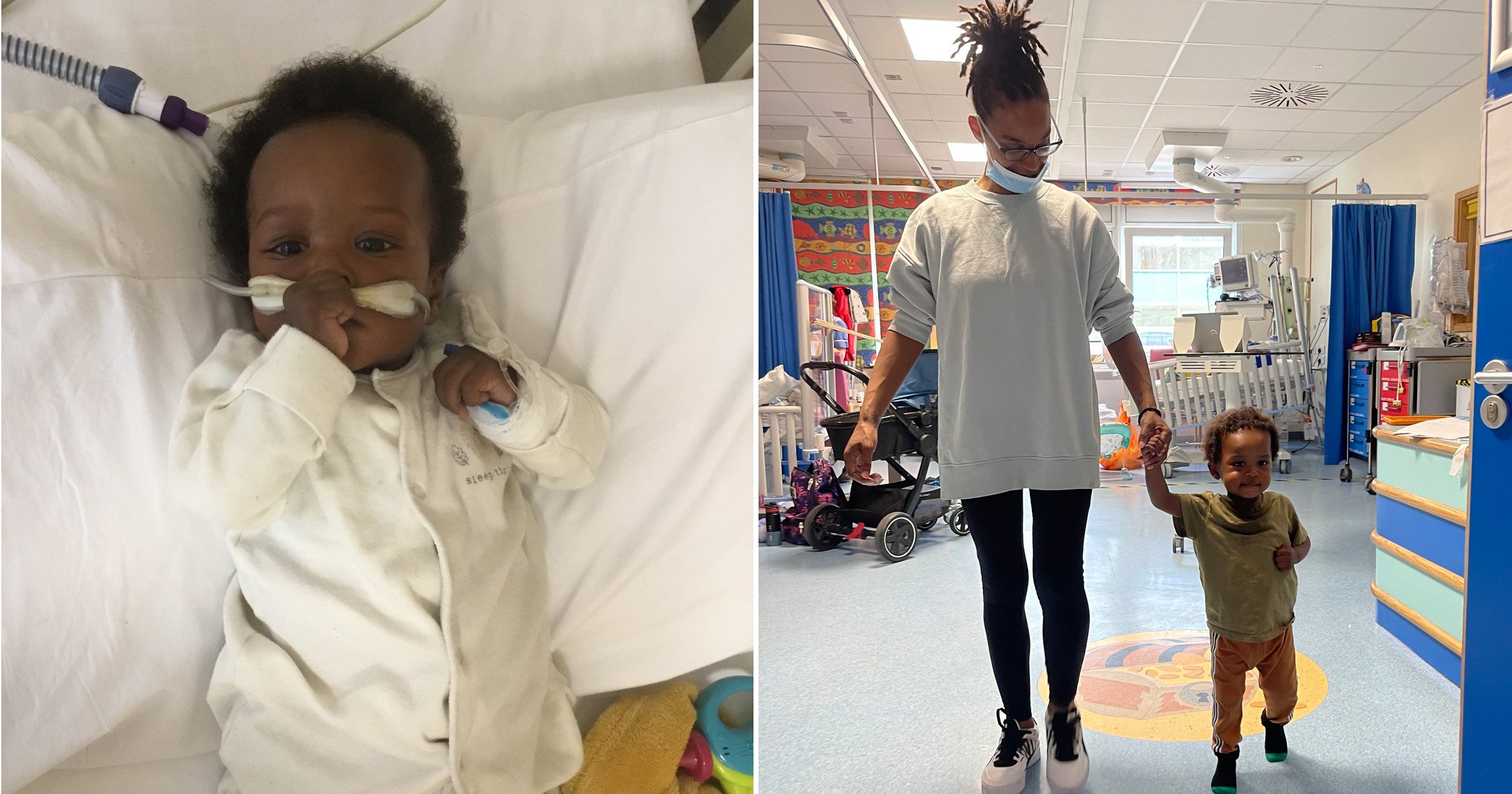 A toddler has been dubbed a ‘miracle boy’ after returning home from hospital for the first time in a year.

Cairon Barry-Edwards was six-months-old when he was admitted to Southampton Children’s Hospital having suffered a cardiac arrest at his home in Reading, Berkshire.

He was then diagnosed with cardiomyopathy – a rare disease of the heart muscle which makes it difficult to pump blood to other parts of the body.

The severity of the disease meant doctors prepared Cairon’s family for the worst on multiple occasions.

But against the odds, Cairon, who is now 18-months old, has survived and after a difficult year in the paediatric intensive care and high dependency unit, he has been able to return home.

While in hospital, Cairon was put on the heart transplant list but the chances of a successful outcome were considered low.

A University Hospital Southampton spokesperson said: ‘Cairon’s weight and age combined with the likelihood of a donor organ being available and then successfully transplanted, meant the odds were stacked against him.’

Doctors refused to give up and an intense heart failure management plan was drawn up for Cairon, using the expertise of a team of doctors, dieticians, nurses and pharmacists.

The plan aimed to find a way to help Cairon gain weight while also finding a suitable drug to help support his heart condition and giving the youngster the best possible chance of survival, the spokesperson said.

Cairon struggled to gain weight due to being in heart failure and severe discomfort in his gut every time he was moved over to formula milk.

In a bid to help the youngster, doctors developed a plan to nourish him using a method called parenteral nutrition – feeding him directly through his veins, completely bypassing the digestive system and therefore taking pressure off his heart.

‘Once Cairon started to gain weight, cardiologist Dr Tara Bharucha started the lengthy process of finding the right drugs to treat him with,’ the spokesperson added.

‘And with the agreement of Cairon’s mum, Dr Bharucha opted to trial a new heart failure drug called Entresto, which unlike his previous medication, can be safely administered at home.’

Dr Bharucha said: ‘Entresto hasn’t widely been used in children and Cairon is thought to be one of the first children under the age of one in the UK to receive it.

‘He’s certainly the first in Southampton.’

‘It is not something that would be suitable for every young patient, but we were hopeful it would benefit Cairon and are so pleased with the outcome.’

‘When Cairon first came to us he was a very poorly little boy and there were several moments when I had to discuss with his mum the possibility that he might not survive.

‘But he has amazed us with his determination and strong will – he really is our little miracle.

‘We are all so delighted that we have been able to remove him from the transplant list for now and can finally send him home.’

Cairon’s mother, Shantelle, 40, who has not left her son’s side since the day he was admitted, said: ‘It’s been a crazy year, a bit of a blur really.

‘I haven’t been home for 12 months and I’ve only seen my other children Tafari and Ayanna, a handful of times, but you just have to go with it.’