The clip was recorded within hours of a Yamaha MT10 being stolen outside a coffee shop just hundreds of yards from this scene. The thieves are seen wearing the same clothes in both thefts in Birmingham city centre, which police are now investigating.

One witness of the latest offence said: “I heard a cutting sound. When I looked over I saw orange sparks flying by the chains. I realised that they were cutting them by using an angle grinder.

The owner of the Yamaha previously told Birmingham Live he was “gutted” following the theft.

“I’m absolutely gutted. I bought that after I set up my own business and worked 14 to 17-hour days for a year.” 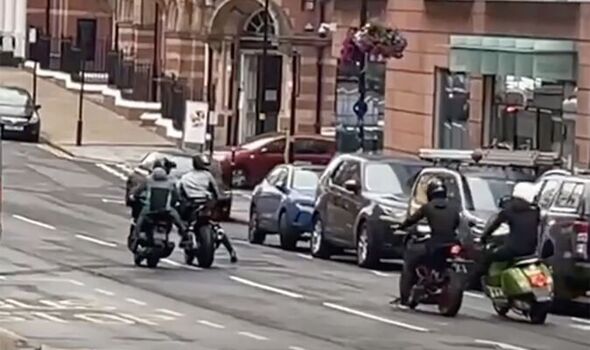 A West Midlands Police spokesperson said: “Enquiries are ongoing. Anyone with information is asked to get in touch by calling 101, quoting reference number 20/741126/22.”

A surge in vehicle thefts has been linked by police to a national shortage of car parts.

Thieves are stripping cars “in a matter of hours” so they can sell the components for high prices, one senior officer said.

Superintendent Jim Munro, of West Midlands Police, advised motorists that vehicles left in car parks for only a few minutes are still not safe.

Mr Munro said: “What we’ve seen over the pandemic is there are some issues around parts supplies coming into the motor industry and delays with builds.”