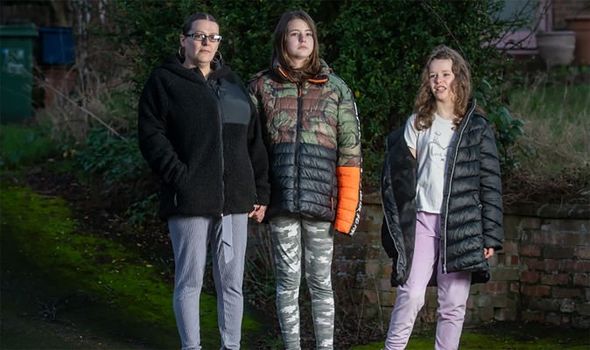 Kaylee Kimber-Johnson, 34, said her mother once told her criminality “runs in the blood” after she was arrested as a teen.

The Daily Express Break The Cycle campaign is calling for the Ministry of Justice and social services to install a system which flags up at-risk youngsters to the authorities and a commissioner to protect their interests.

Kaylee’s mother and father Paul were both sent to prison and her partner was jailed in 2016 for attempted rape, sexual assault and assault.

Kaylee herself was jailed for fighting with her ex-partner while her first child was taken into care when she was 20.

But now Kaylee, from Oxford, is studying to become a social worker and has vowed to do everything to divert her children Erin and Elsie from crime. She told the Daily Express: “My mum said ‘crime is in the genes’. She was a shoplifter and my dad used to steal cars.

“And that was what I went in for – stealing cars with boys on the estate. I was first arrested when I was 12 or 13. The people around you become family. And that is what makes it so hard to get away because you feel like you are turning your back on them.

“But you are just trying to improve your life. It’s about breaking the cycle and showing children that being a criminal isn’t a good life.”

These youngsters are three times more likely to engage in anti-social behaviour.

And two thirds of boys with parents in jail later commit crime – with 25 percent developing mental health problems, playing truant and under-performing at school because of the stigma of having a parent in prison.

A pilot scheme by Thames Valley Violence Reduction Unit in Oxford identifies children as soon as a parent is jailed. They then refer them to charity Children Heard and Seen.

It offers mentoring and activity days for at-risk youngsters. The charity helped Kaylee and her children but she wants more done nationwide.

She said: “Something needs to be in place as soon as a parent goes to court. It is like we are a lost cause.”

Sixty five percent of boys with a parent in prison go on to offend.

That is according to the latest estimates – over a decade old.

The truth is, no one knows who they are, no one knows how many there are. When we tell people there is no agency responsible for these children, they are shocked.

They assume social services would know when someone is sentenced who is leaving children on the outside. They do not.

No child can be responsible for their parent’s offences, yet too often this is exactly how their treatment seems to them.

But it is possible, with the right support, that the cycle of intergenerational offending can be broken.

At Children Heard and Seen, we don’t have any magic solutions.

But we do ensure children don’t feel they are the only person suffering with this, that they are not alone. We provide one-to-one sessions and the chance to talk about feelings relating to having a parent in prison and to look at their own choices and aspirations.

We also provide volunteer mentors – someone from outside the family home – who is a listening ear and a gentle guide.

We ensure they know that their own path is theirs to choose.

The families we work with have described our support as incredible and life-changing and has provided the children with the opportunity to flourish.