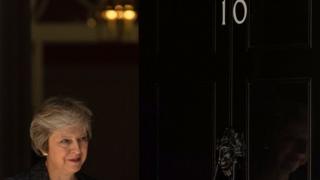 What’s so striking about this draft Brexit deal the UK media and politicians are all abuzz about, is the marked lack of excitement and/or hysteria in EU circles.

Contrary to the UK narrative, this is not viewed in Brussels as the back-against-the-wall, make-or-break moment.

There’s still some time to keep negotiating. EU-UK technical talks are, in fact, ongoing as neither all the “i”s, nor all the “t”s of a deal have yet been dotted or crossed.

The thinking here is: if the UK cabinet or certain EU member states strongly object to specific parts of the draft document (as long as they don’t rip up the whole thing), then negotiators can go back to the drawing board.

As I’ve mentioned before, the EU is clearly more relaxed about timing – as long as a deal is signed before March – than Theresa May at this stage.

You get the feeling that the current sense of pressure and urgency is designed to help the UK prime minister at home.

Storm clouds surrounded her once again last weekend, with cabinet minister Jo Johnson resigning and mutterings of potential mutiny from Brexiteer and Remainer conservative MPs, never mind the Labour Party and the DUP plotting over the eventual Brexit parliamentary vote.

It looked (once again) like the whole thing could unravel on the UK side.

Brussels has repeatedly told Mrs May that – as long as they could agree on the details of a deal amongst themselves – the EU would help her present it however she wished in order to help her sell the package back home.

I think now is one of those moments, which would explain why Brussels kept so silent on Tuesday night – such a politically sensitive night in the UK.

One of my high-level EU contacts even sent me an emoji with a closed zip instead of a mouth – to indicate that he couldn’t talk.

These are hours for Downing Street to spin.

This is not to say that the EU is completely chilled about the appearance of a draft Brexit deal – played down to me by a Brussels contact as a “mutual understanding” between EU and UK negotiators.

That’s a reminder that this is a technical draft – not yet a political agreement.

While all eyes on Wednesday will be on Number 10 Downing Street and the reaction of the UK cabinet, the governments of all 27 EU countries and the European parliament also want to get their eyes and their mitts on all 500 pages of the document ASAP.

Of key interest to them: the compromise wording over the backstop, that insurance policy for the Irish border.

They, and Ireland in particular, will be relieved to see something Brexiteers will not like at all – that the EU will decide alongside the UK if and when the backstop arrangements need to kick in and also when they can be terminated and superseded by a new EU-UK trade deal.

They will also note that the all-UK customs union with the EU outlined as part of the backstop will be deeper with Northern Ireland than with the rest of the UK. This will be hard for the DUP to swallow.

More important to EU heavyweights France and Germany – and others that trade closely with the UK like Ireland, Denmark and the Netherlands – will be to examine the small print of the backstop customs union to ensure the UK would have no competitive advantage over them.

I’ve spoken to diplomats who worry the European Commission was in such a hurry to get this draft Brexit deal document ready to Theresa May’s timetable, that the priorities of some EU member states may have been overlooked.

France, Denmark, the Netherlands and Spain for example won’t be happy that fishing rights in UK waters do not seem to appear in the text.

European capitals want a minimum of seven to 10 days to pore over the draft with a fine toothcomb.

So, could there still be a special Brexit deal summit called this month as Theresa May so hopes?

It’s not impossible – 25 November is being spoken about as a potential date.

Later on Wednesday as the UK cabinet meets in London, the 27 EU ambassadors will gather in Brussels.

To be discussed: the draft Brexit deal, the possibility of a November summit and – as a clear indication of the current uncertainty – ongoing contingency plans for a no-deal Brexit.