LONDON — After years of delays, stumbles and intermittent negotiations, Prime Minister Theresa May this week finally presented a draft plan for Britain’s withdrawal from the European Union — and it has been roundly and loudly panned. Her government is teetering on the verge of collapse.

Supporters of Brexit had promised that leaving the European bloc would be quick and simple. But it has turned out to be the opposite. To understand why, it helps to understand the origins of Brexit, and how that history is playing out today.

Britain joined the forerunner of the European Union in 1973, but British politicians have always been ambivalent about the bloc. The issue has long divided both of the country’s major parties, the Conservatives and Labour, and it became especially divisive among the Conservatives. Finally, in June 2016, Prime Minister David Cameron decided to settle the question by putting it to a yes-or-no national referendum.

Mr. Cameron bet that the country would not take the risk of leaving the European Union. He was wrong. Britons voted 52 percent to 48 percent to leave.

Britons awoke the morning after the referendum to a predicament: The campaign to quit the bloc had promised to “take back control” from Europe, but it never spelled out how. The embittered Remainers who lost the vote quickly accused the Leavers of lies and xenophobia.

Politically, Britain has spent the past two-plus years in a political stalemate. Labour settled into an uneasy opposition, and the Conservatives struggled with continuing divisions over Europe. Mrs. May replaced Mr. Cameron and was charged with negotiating a Brexit deal with the European Union.

But her biggest challenge was building support at home. One pro-Brexit faction has championed a clean break, so Britain would regain sovereignty over trade and immigration, while breaking free of the European Union’s institutions, including its Court of Justice, a particular concern for them.

Others preferred to maintain close economic ties with the bloc, even if that meant ceding or sharing some control over these matters with the European Union.

With Britain scheduled to leave the European Union on March 29, Mrs. May has been trying to broker a compromise between the two sides to avoid a chaotic “cliff edge” withdrawal that could leave ports blocked, airlines grounded, and food and drugs running short. That was the draft she presented on Wednesday. 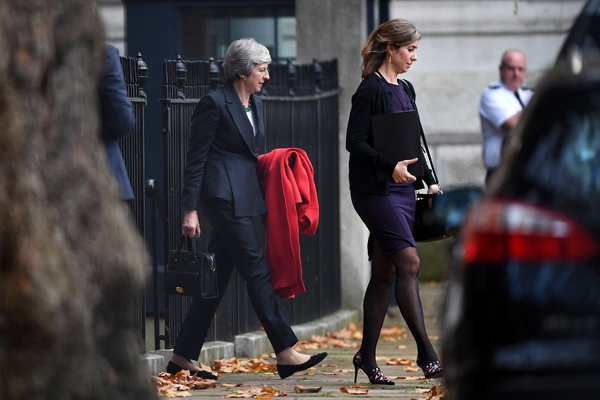 Why Is a Compromise So Elusive?

The Achilles’ heel of the entire process of Brexit is the border between Ireland, a member of the European Union, and Northern Ireland, which is part of the United Kingdom. For years, this border was militarized and a focal point of The Troubles, the sectarian violence that left more than 3,500 people dead. But the militarized border was removed after the 1998 Good Friday peace accord, and trade was allowed to flow freely between both sides.

This was possible because Ireland and the United Kingdom were members of the European Union. But when Britain voted to leave, the Irish border again became an issue. The possibility of having to reintroduce border controls posed myriad economic, political and historical problems.

To solve the problem, Mrs. May’s draft agreement proposes keeping Northern Ireland, and the rest of the United Kingdom, in a European customs union, potentially indefinitely, or until a final trade agreement is completed. But this means that Britain would also still be subject to some of the bloc’s trading rules and regulations.

In short, while paying a $50 billion divorce bill, Britain would be bound by many European Union rules for the foreseeable future without any say in the making of them. It would also be subject to some extent to the European Court of Justice.

This infuriates the hard-line Brexit crowd, who say it would leave Britain as a “vassal state.”

But they aren’t the only ones offended by this arrangement. The Democratic Unionist Party of Northern Ireland, which provides a crucial 10 seats to prop up Mrs. May’s minority government, is also up in arms.

That is because the plan would impose more European rules on Northern Ireland than on the rest of the United Kingdom. The D.U.P., which wants above to remain in the United Kingdom, sees the draft agreement as an existential threat that would place a new border in the Irish Sea, effectively putting Northern Ireland in a de facto union with Ireland.

And don’t forget Scotland, which wants very much to remain in the European Union and is wondering why it cannot have the same deal as the one the D.U.P. so hates.

So What Happens Now?

No one really knows. If all goes well for Mrs. May over the next few weeks — and that is far from assured — then European Union leaders will complete the deal at a summit meeting later this month. It would then need the approval of the British and European Parliaments. But the route to that outcome is treacherous, to say the least.

Mrs. May is currently fighting for her political life amid a big Brexit backlash in Parliament and calls within her Conservative Party for a no-confidence vote in her leadership. And few experts think the British Parliament will approve the draft plan in its current form.

The opposition Labour Party has made clear it will instruct its lawmakers to vote against, hoping to secure a general election. The Scottish National Party and the centrist Liberal Democrats are likely to do the same. And there is the problem for Mrs. May of the D.U.P.

On Thursday it became clear that even Conservatives who campaigned to remain in the European Union were planning to vote against the draft agreement, hoping that the resulting crisis could mean a softer Brexit, or even no Brexit at all.

If the plan were to be rejected, Parliament could ask the prime minister — or her successor, if she should step down — to go back and negotiate another deal, though the European Union is highly unlikely to oblige. And time is running out before the March 29 deadline.

There could be a general election, or Britain could face the cliff edge departure so feared by business.

There is even talk that in the chaos that would presumably accompany a parliamentary rejection of the agreement, the oft-heard pleas for a second referendum on Brexit might finally gain traction.

But, for now, your guess about the outcome is as good as anyone else’s.