Polish MEP Danuta Hubner demanded British voters accept that “Brexit is not doable” as she urged them to “think twice” on their decision to withdraw from the European Union. Ms Hubner, a member of the EU Brexit steering group chaired by Guy Verhofstatd, suggested Britain use the extension Theresa May secured until October 31 to reconsider their position. Speaking to Sky News, she said: “We have reached such a moment that, maybe, we should all come to the conclusion that Brexit is not doable.

“It obviously makes such damage to politics, to the political system, to the integrity of the kingdom and to our lives, maybe it’s time to use the long extension we have offered to the UK to think about it.

“If we end up on November 1 in the same situation we are in today, it just doesn’t make much sense.

“It’s time to make a decision and we know we cannot make a decision that would lead us to no deal. I would also ask people about the future because the future is what really matters,  not so much leaving the European Union, which is mostly technical with political consequences.”

The Prime Minister asked Brussels for an extension of the Brexit deadline after MPs refused to have her proposed withdrawal deal pass through the Commons three times. 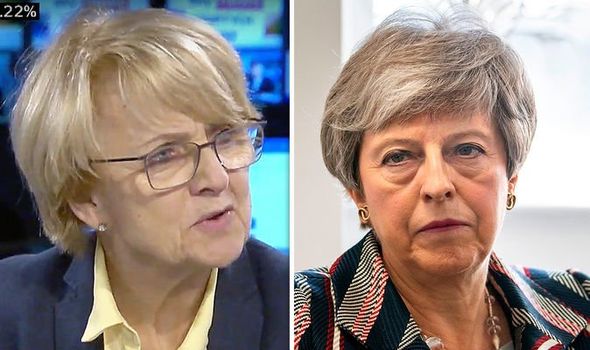 But Ms Hubner also said the UK should depart quickly should British voters stand their ground on their decision to quit the bloc.

She continued: “If you have to leave, just leave as quick as possible.

“Use the transition period fully – which can go nearly to four years – and then think twice. In the meantime, think how deep, how close and how important you want relations with the EU to be.

“Once you decide to leave, I think you should do it in an orderly manner which will give you the transition period. That allows you to think well about the future.

“Now leaving is blocked by those who cannot agree on the future because a customs union belongs to the future.”

The Prime Minister has been engaged in cross-party talks with Jeremy Corbyn in an attempt to win the support of the Labour Party to have her deal accepted in the Commons.

But 13 former ministers, together with the chairman of the backbench 1922 Committee Sir Graham Brady, have written to Mrs May demanding her not to concede to Labour’s demands to agree to a customs union, amid warnings she risks losing the “loyal middle” of the Tory Party if she gives ground on a customs union.

A cabinet source said told The Sun: “The talks will end this week whatever. I can’t see Labour carrying on with them.

“Whether she then goes or not will depend on whether No 10 have a Plan B, because we need one now, and it must be credible.”

Their intervention comes as Downing Street sources attempted to “calm Tory troops” by insisting they would not sign up to a permanent customs union.