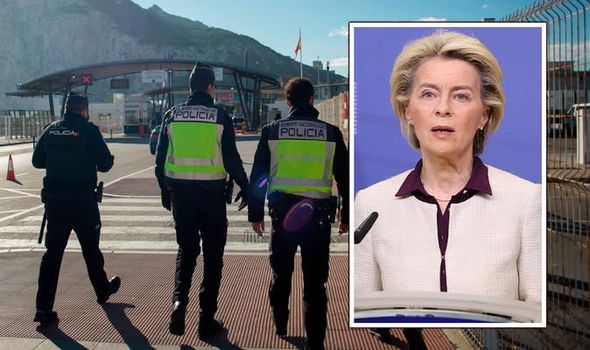 Gibraltarian officials are now clearing out some tunnels within the island for stockpiling supplies or blocked exports to Spain, in case a deal is not reached. It comes as the EU and UK are set to enter a third round of crunch talks concerning Gibraltar this coming Tuesday.

The UK has already reached a post-Brexit agreement with Spain over Gibraltar, but this has to be put on hold until a separate agreement over goods and customs is reached with the EU.

Speaking ahead of talks – due to take place in Brussels – Gibraltan Chief Minister Fabian Picardo hit out at the EU for “excessive” and “unnecessary” demands.

Mr Picardo told the House of Commons earlier this week that a new treaty would “resolve current issues” and confirmed: “The future of Gibraltar is British, British British”.

Dr Joseph Garcia, Gibraltar’s deputy chief minister, told the Telegraph the clearing of the World War 2 tunnels “should increase our storage capacity from something like two days to two months.”

Brexit Britain could take advantage of a booming new market that could bring in over 40,000 new jobs and £1.2billion.

Drug policy think tank Volteface has called on Boris Johnson to make the most of the new market of medical cannabis and CBD products opened up by Brexit.

Volteface told the Express: “The UK CBD market – the biggest in Europe – and medical cannabis markets were previously hamstrung by bureaucratic decision-making made by the EU.

“Now the UK has left the single-market, the UK can lead on these burgeoning growth markets, but only if it acts fast.”

It added that the “embracement of the sector could create an enormous 41,000 thousand direct jobs, and a further 17,000 supporting roles.

“The roles would be a mix of both skilled and unskilled jobs, and crucially could provide a major boost to British farmers that would level up middle-England.”

Ben Harris-Quinney, chairman of the right-leaning Bow Group think tank, has told the Express that the UK Government has taken a “naive approach” to renegotiations of the Northern Ireland Protocol so far, and was at risk of being “out-manoeuvred” by the EU.

He urged the Government to take a hard stance in negotiations.

He said: “Business in Northern Ireland and beyond has been damaged by the existing Northern Irish Protocol, but what is even worse for business is uncertainty over what the rules will be for the foreseeable future.

Mr Harris-Quinney continued: “If the EU is not willing to budge on key issues like goods checks and ECJ arbitration the government should trigger Article 16 and force a conclusion, rather than allowing the status quo and negotiations to carry on indefinitely.

“The government has however taken a naive approach thus far, there is a danger of being out-manoeuvred by the EU again, and there is a risk that they have not adequately prepared or positioned themselves for the potential fallout of triggering Article 16.”

French fishermen leader could be thrown out of British waters

Olivier Leprêtre, the leader of a proposed collective action by French fishermen in the ongoing row over licenses to fish in British waters, faces expulsion.

The fisherman is one of few left without a license to fish in UK waters, it was revealed on Saturday.

Mr Leprêtre, who as chairman of the regional fishermen’s committee coordinated stoppages at various ports and the Channel Tunnel on Friday, claimed he was being denied a license because the UK Government stipulates applications must be based on fishing boats themselves rather than the personal experience of fishermen.

Why is Gibraltar stockpiling supplies?

There are two more rounds of scheduled talks concerning a deal between the UK and the EU on Gibraltar – one next week in Brussels and another in December.

There are hopes issues around goods and customs flowing between the British territory and Spain will be resolved then.

However, the Gibraltarian Government has opened up some of the underground space to keep goods should a deal not be reached.

The caverns – some of which are “the size of cathedrals” – would hold goods in case there are shortages coming through customs to the rock, and Gibraltarian goods making their way into the EU.

The European Commission sparked backlash in the summer, when it published draft agreement guidelines which appeared to contradict the agreement already reached between the UK and Spain.

It suggested that Spanish border officials would be stationed at Gibraltar airport and port rather than agents from the European Frontex.