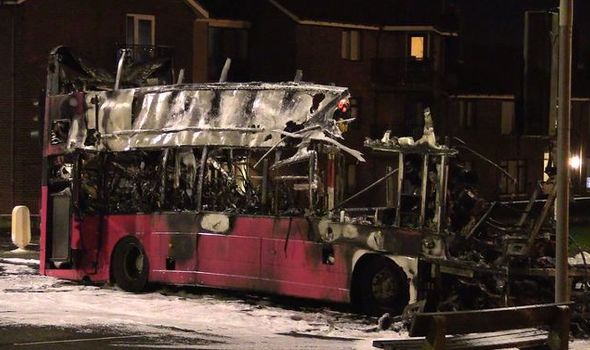 Video of the vehicle’s smouldering wreck in Newtownabbey, County Antrim went viral on social media. The incident happened on Church Road at about 7:45pm.

Police said four men got on to the bus, ordered the passengers and the driver to get off and then set it on fire.

He tweeted: “This is beyond contempt. There is never any justification for such criminality, and there never will be.

“This only causes disruption and distress to people’s lives. My thoughts are with the driver and passengers. I would appeal for any witnesses to contact.”

Infrastructure Minister Nichola Mallon tweeted: “What does this madness achieve?”

“Buses are paid for and owned by the people of Northern Ireland,” she added.

“Without them people can’t get to and from work, or school, or hospital appointments.

“Our bus drivers are working class people who deserve to be safe in their jobs.”

Speaking tonight after a bus was hijacked and burnt outside the Valley Leisure Centre, People Before Profit Councillor in North Belfast Fiona Ferguson said: “Another distressing and despicable attack on a bus driver and passengers.

“I utterly condemn this act and those behind it. They do not represent anyone but their own terror agenda.

“Those stoking division from the top must stop. Solidarity to all Translink workers watching this.”

Doug Beattie , the UUP leader said: “Terrorising society with the hope of achieving what exactly?

“This is utterly pathetic and it needs to stop.

Those responsible do not represent the overwhelming majority who just want a peaceful society.”

Church Road is closed and diversions have been put in place.

Police are instructing the public to avoid the area.