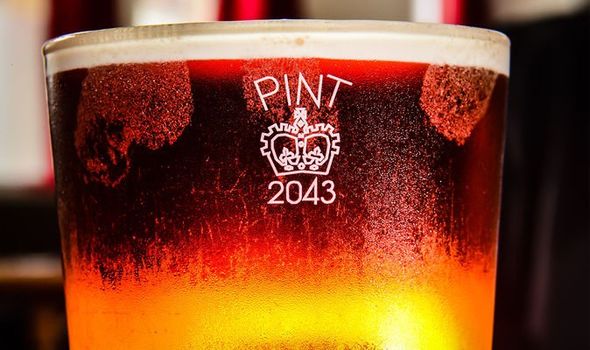 There was dismay in the pub industry when an EU directive which came into force in 2006 introduced the “CE” mark as the guarantee of the pint measure and banned the use of any other markings. Brewing and pub companies urged then-prime minister Tony Blair to act to allow them to keep the crown, damning the replacement of the mark which they said had been used since 1699 as a “needless intrusion”.

In the latest move to make the most of post-Brexit freedoms, ministers are expected to announce plans to reintroduce the crown stamp in the coming weeks.

This will be part of a bigger package of changes designed to slash EU-era red tape to “improve competition, remove barriers to innovation and help both consumers and businesses”.

A Government source said: “We took back control so we could make decisions which work in our own best interests. Pint glasses may be symbolic, but it’s just a small part of a wide-ranging drive across government to establish the right regulatory environment to help both businesses and consumers in the UK thrive and succeed.”

The Government will set out plans to take advantage of freedoms gained since cutting the cord with Brussels in areas including “data, transport, life sciences, farming and the environment”.

Lee Anderson, the Conservative MP for Ashfield, was delighted at the return of the crown.

He said: “This is one of the many benefits of Brexit. The first pint I have with the crown on will taste much better.”

Former Brexit Party leader Nigel Farage welcomed the prospect of drinking a pint from a glass featuring an emblem of the crown.