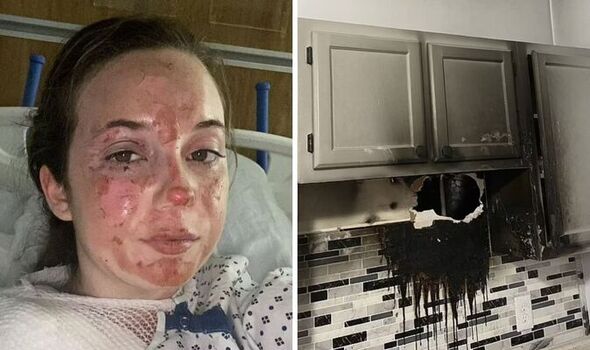 A bride was left with no choice but to call off her wedding after sustaining burns that “melted” her face when a cooking pan went up in flames. The incident took place just six days before she was due to get married. Brenley Davis, 22, had just sat down to eat dinner with her husband-to-be Justin Davis, 25, on August 31, 2020, when she spotted smoke flooding the room. The former Marine Corps reserve from Jacksonville, North Carolina, leaped from her seat to discover she had accidentally left the stove on for an hour – causing a pan of oil to overheat and smolder.

As Brenley turned off the heat ring, marine Justin opened the doors and windows to let the smoke out.

But tragically, the air from outside blew through the kitchen and “fueled” the oil which then caused the pan to “burst into 30-inch flames”.

As her adrenaline kicked in, terrified Brenley dashed over to the burning pan and grabbed it with her bare hands before dashing outside to throw it.

But the flames blew against her body and Brenley sustained second and third degree burns to her face, arms, ribs, chest, legs and feet.

After enduring month of treatment, Brenley was finally able to tie the knot in November 2020 and decided to keep her scars on show.

Brenley has since trained as a nurse where she hopes to help other burn survivors.

She is now warning families to stay vigilant while cooking this Christmas and to have a fire extinguisher to hand, as she believes safety measures could have prevented her burns.

Brenley said: “I felt like my whole face had melted off. I was so scared.

“I was making French fries. I thought I’d turned the oil off but it had been on the stove for an hour on medium to high heat. The next thing I knew it started smoking. I removed the lid, turned it off and pushed the pot off the burner. We opened the windows and back door and I guess the air that came in from opening the windows fueled it.

“It automatically caught on fire and the flames were so high that it was burning the cabinets. My husband called the fire department and he was standing outside on the back patio. I was just standing there watching it burn and next thing I knew, my adrenaline kicked in. I grabbed the pot and ran with it. I still don’t know what possessed me to grab a pot with 30-inch flames coming from it.

“The flames were so high that it was burning my face, arms, ribs and chest. Once I got outside and threw the pot, the fire [blew] back on my leg. The flames were still going and I ran through it. It then got the bottom of my feet.”

At first, Brenley claims the shock almost numbed her pain but after being rushed to hospital and admitted to a trauma unit, her injuries began to turn into extreme swelling and blisters.

Brenley added: “When my mama saw how much pain I was in, she wanted to kiss me but she couldn’t. She took her nose and gently rubbed it on mine but my skin peeled off. I couldn’t feed myself, I couldn’t use the bathroom and could barely walk. Justin took care of me. He was upholding his vows before he’d even said them. He was having to do everything for me.”

Brenley then underwent a series of painful procedures including having each of her blisters drained before undergoing skin graft surgery for her second and third degree burns.

While in recovery, her body “scabbed over” and she was overcome with extreme itching – which later led to her scabs having to be pulled off with her bandages. She then had to perform agonizing physiotherapy for months to get her arms moving and the skin stretching.

Brenley said: “My skin was very red and still had blisters but the worst part overall was my mental health. This has changed me. It’s made me stronger. I had PTSD and I’ve had dreams about being set on fire and the house burning again. I had to keep reminding myself that I’m here for a reason, I’ve survived and that I can use this positively.”

After being discharged from hospital and taking time to heal, Brenley booked in her wedding for November 2020 – less than three months after her horrifying ordeal. Brenley said: ‘It was a wonderful wedding even though we [previously had] to cancel everything six days before. It was a beautiful wedding.”