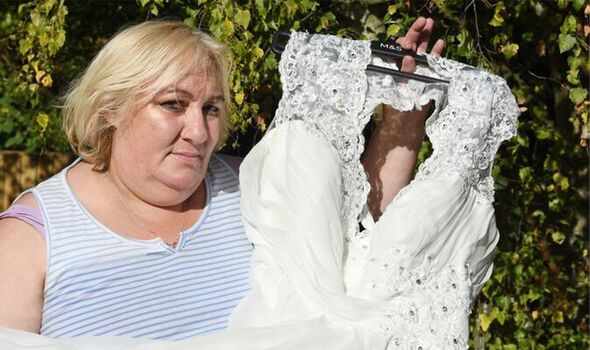 A furious bride claims her dress was “ruined” mere days before her wedding, after taking it to be cleaned at a supermarket.

Celena Flockhart, 57, took her dress to Timpsons, inside Morrisons at Gamston, Nottinghamshire, after staining the garment during a makeup trial.

Celena told Nottinghamshire Live: “About five days before my wedding, it was my fault, I had a practice makeover done and that night I went to try my wedding dress on and I got makeup on the inside of the dress. So I went to Timpsons at Gamston, and I said to the woman I need this for Sunday as I’m getting married on the Sunday, and I’ve got make up on it.

“She said ‘yeah we’ll get it done as soon as possible’. It was in perfect condition. Then the next day or the day after, I got a phone call saying that the dress was ready.

“It was my mother who went to pick the dress up, and she didn’t say anything, she took it home, and when she got it home all the sequins on the embroidery bit had all come off; they were all loose, and all the hook and eyes were bent. That woman at no point said [what had happened], she obviously didn’t check the dress to see if it was damaged.”

Celena added: “To me, they should have checked that dress before it was handed over. They absolutely ruined my wedding dress.” Due to the limited time before the wedding, Celena asked her cousin and mum to help repair the dress as her cousin is a seamstress and, at the time, she didn’t realise Timpsons also did repairs. She said: “None of us knew we could take that dress back to be repaired.”

Celena said she has asked Timpson for a refund of the £95 she paid them to clean the dress, but she said they declined as they had cleaned the dress and said she should have returned it to the shop at the time rather than having it repaired elsewhere. However, they did give her £50 towards the repair costs she paid, and an additional £25 as a sign of goodwill.

She said: “The stress it has caused me, I actually had a panic attack, when I saw my dress I actually cried. It has upset me big time.”

Happily, Celena got married in Radcliffe-on-Trent on Sunday, September 11, after her cousin and mum were able to repair the wedding dress in time.

A spokesperson for Timpson said: “Mrs Flockhart deposited the dress into our branch in need of cleaning due to spillage of makeup and fake tan on the dress before needing this for her wedding. The dress was cleaned in accordance with the aftercare label and the dress was taken away – the customer was happy.

“Would like to note that since Mrs Flockhart has returned twice using our services. Mrs Flockhart then returned to advise she had to have the dress repaired, we were not given the opportunity to view the damage nor rectify this.

“However we agreed to reimburse the customer the £50 paid and also as a gesture of goodwill we offered £25 in recognition of the service, the customer declined our offer and asked for more compensation. We felt we had been fair and Mrs Flockhart accepted the monies we offered and we closed the matter.”

Despite the problems she faced with her dress, Celena says she and her husband enjoyed their wedding day and have since been on their honeymoon. However, Celena explained that she has not and will not ever be returning to the store. She said: “I’ve definitely not been back there, I would never go there again in my life. I couldn’t have gone back, I was on my honeymoon