Ten people have been arrested after demonstrators took to the streets on Friday evening to oppose the Government’s Police and Crime Bill. Avon and Somerset Police confirmed that projectiles including “eggs and glass bottles” were being thrown at officers. Fireworks were also seen to be thrown at the police.

Riot police were seen using shields to push back protestors who reportedly threw objects and fireworks at them.

At 10.35pm on Friday, Avon and Somerset Police tweeted: “Projectiles, including eggs and glass bottles, are being thrown at officers.

“Protestors are also pulling at officers’ shields while lasers are being shone in their faces. We will not tolerate violent disorder.

“Arrests have been made.” 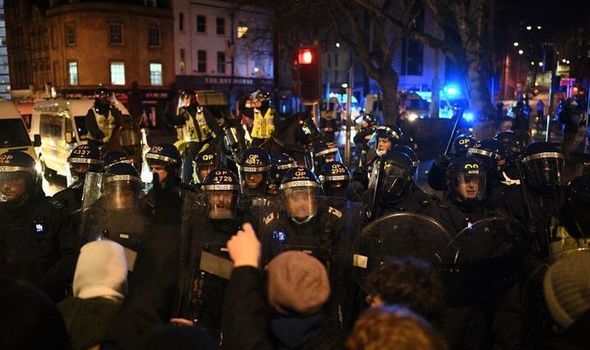 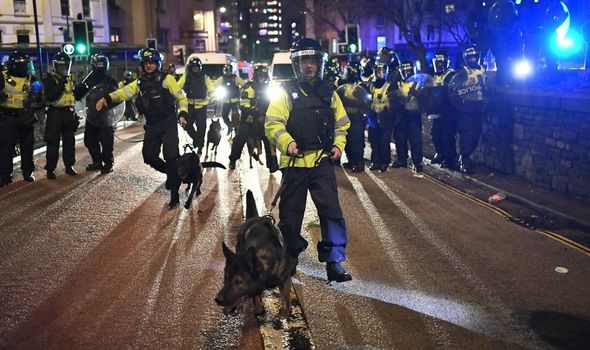 An hour later, the police confirmed that a large number of protestors remained in the city.

They said: “A large number of people remain in Bristol.Officers dispersing the crowd are highly trained & accredited in public order.

“They have the ability to use reasonable force to prevent crime, protect people & property.

“We don’t want to use force but we have a duty to enforce the law.” 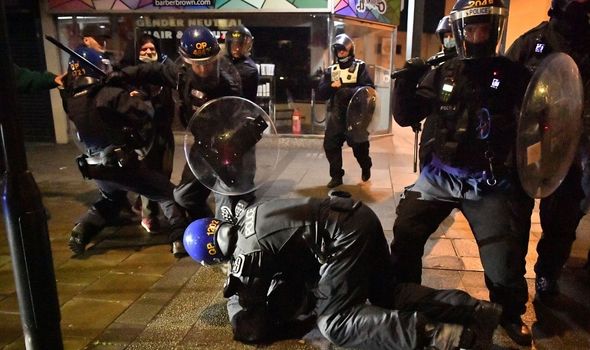 Local Avon and Somerset Police Superintendent Mark Runacres later said in the statement: “Ten people were arrested for offences including violent disorder, assaulting an emergency worker and possession of Class A drugs.

“Items, including glass bottles and bricks were thrown at officers, fireworks were launched at our mounted section while one of our horses was also covered with paint.”

According to reports, around a thousand people gathered in Bristol on Friday.

Two violent confrontations had already taken place this week between the police and protestors.

Activists had organised a staged sit-down demonstration earlier on Friday outside Bridewell police station in Bristol.

The situation remained peaceful until later in the evening when demonstrations escalated.

The police had urged protesters to go home due to coronavirus restrictions. 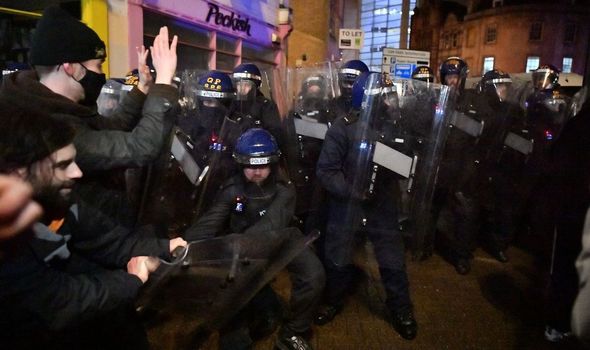 Avon and Somerset Police said at around 7pm that the activists’ presence on the streets “only increases the risk of spreading coronavirus”.

They added: “We have facilitated their march through the city and now urge them to go home.”

Officers on horseback were deployed to monitor the situation.

Due to COVID-19 restrictions, public gatherings are not currently permitted.

Chief Superintendent Claire Armes said: “We have all sacrificed so much to stop the spread of this terrible disease and we’re so close to a relaxation of the restrictions, when protest will again be possible.

“In Avon and Somerset, we remain committed to facilitating peaceful protest when it’s safe and lawful to do so, however gatherings remain a breach of COVID-19 restrictions and risk increasing the spread of coronavirus. We urge you not to come.”