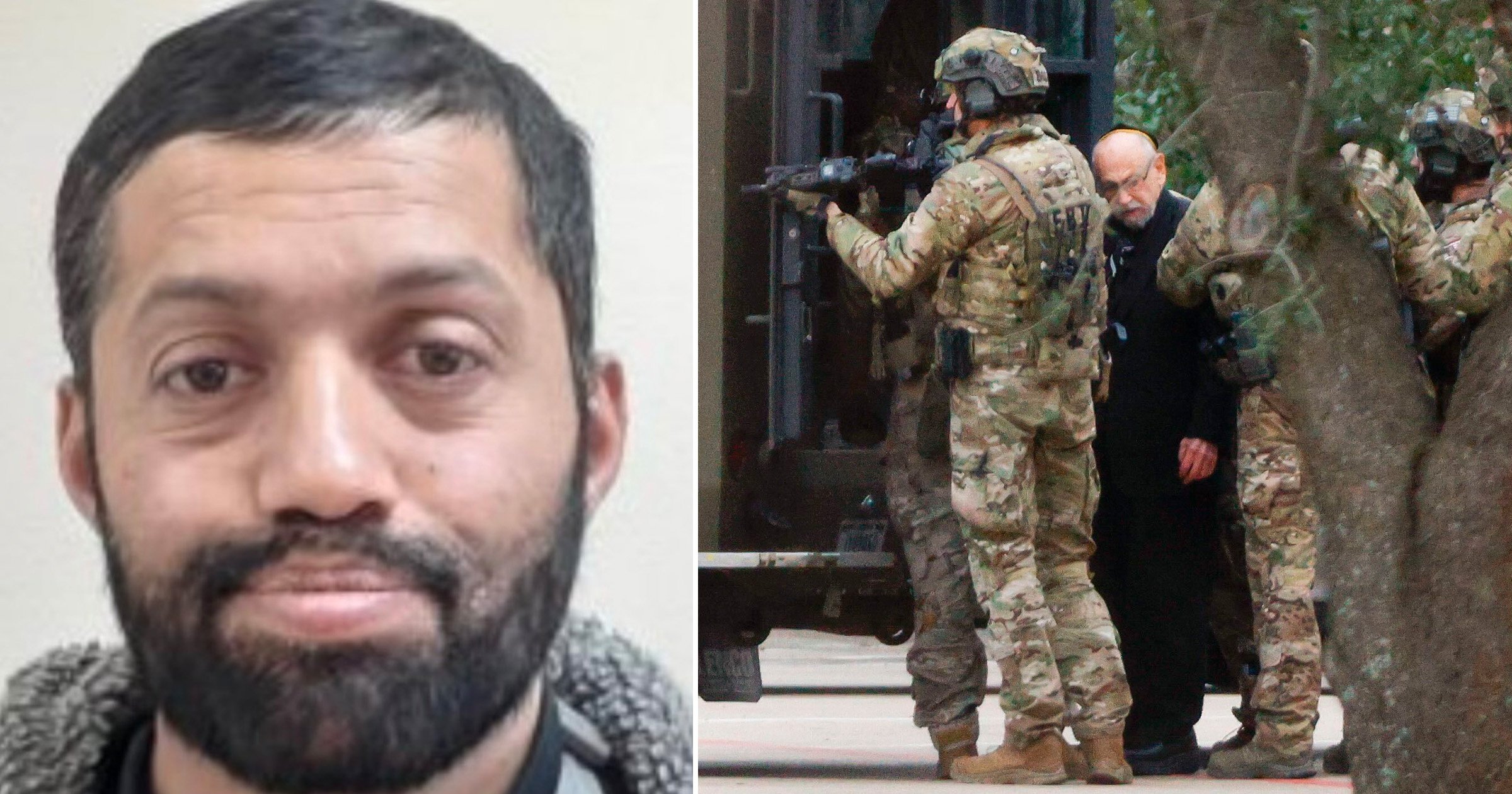 A British man shot dead after taking people hostage inside a Texas synagogue has been pictured.

Malik Faisal Akram, originally from Blackburn in Lancashire, was shot dead on Saturday night after a 10-hour standoff with police at Congregation Beth Israel in Colleyville.

The 44-year-old held four people hostage, including the rabbi at the Beth Israel synagogue.

It comes police arrested two teenagers in Manchester as part of investigations into the incident.

Akram was killed after an FBI swat team stormed the building following the lengthy stand-off during which his family back in Britain tried in vain to get him to surrender.

All of the hostages were released unharmed.

US President Joe Biden has branded the incident ‘an act of terror’ and UK police are working with authorities in America on the investigation.

GMP said: ‘Two teenagers were detained in south Manchester this evening. They remain in custody for questioning.’

The ages or genders of the teenagers have not been revealed.

GMP said police forces in the region are liaising with local communities to put in place any measures to provide further reassurance.

US officials believe Akram had a visa, arrived at John F Kennedy International Airport in New York around two weeks ago and bought a handgun used in the incident ‘on the street’.

In an update to reporters on Sunday, Mr Biden said while he did not have all the details it was believed Akram had ‘got the weapons on the street’, adding: ‘He purchased them when he landed.’

He said there were ‘no bombs that we know of’, and that Akram is thought to have ‘spent the first night in a homeless shelter’.

When Akram stormed the synagogue, it had been live-streaming its Sabbath service on the internet.

Akram could be heard repeatedly saying: ‘I am going to die’ before the broadcast was cut.

He is said to have demanded the release of Pakistani neuroscientist Aafia Siddiqui, who was convicted of trying to kill US army officers in Afghanistan, and is in prison in Texas.

Akram’s family has said they had been left ‘absolutely devastated’ by the weekend’s events and ‘do not condone any of his actions’ according to a statement that has been shared on the Blackburn Muslim Community Facebook page.

Condemning what had happened, the statement from Akram’s family said: ‘We would like to say that we as a family do not condone any of his actions and would like to sincerely apologise wholeheartedly to all the victims involved in the unfortunate incident.’

The statement, which has been attributed to Akram’s brother Gulbar, said family members spent hours ‘liaising with Faisal’ adding that the hostage-taker ‘was suffering from mental health issues’.

‘There was nothing we could have said to him or done that would have convinced him to surrender,’ Gulbar said.

Speaking to Sky News, Gulbar questioned how his brother had been allowed to travel to the US.

‘He’s known to police. Got a criminal record. How was he allowed to get a visa and acquire a gun?,’ the channel has quoted him as saying.

Speaking to reporters after the incident, FBI special agent in charge Matt DeSarno said they believed the man was ‘singularly focused on one issue and it was not specifically related to the Jewish community’, and added they will continue to ‘work to find motive’.

Confirming that the hostage-taker had died, he said there would be ‘an independent investigation of the shooting incident’.

He said the FBI had been in contact with their legal attache offices in London and Israel for an investigation with ‘global reach’.

Foreign Secretary Liz Truss condemned the ‘act of terrorism and anti-semitism’, while the British Ambassador to the United States Karen Pierce said UK authorities are providing ‘full support to Texas and US law enforcement agencies’.