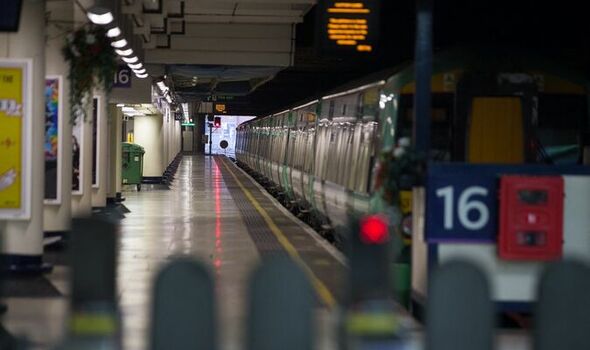 The Rail, Maritime and Transport Workers union (RMT) is balloting 40,000 members until Tuesday. If the strike goes ahead, industry experts say it will create “serious challenges” in keeping goods moving and supermarket shelves stocked.

Transport Secretary Grant Shapps is meeting with the Prime Minister and Chancellor this week to discuss the threat, amid fears that the action could have worse consequences than the junior doctor walkout in 2015.

Network Rail has revealed plans to cut at least 2,500 maintenance jobs as part of a £2billion reduction in spending.The RMT is protesting about compulsory redundancies, safety concerns and pay.

The Government, which runs Network Rail, says it is “overhauling the sector and moving it off taxpayer life-support”. And the Rail Delivery Group, which represents train companies, said: “The pandemic was an unprecedented shock for the railway. We now need to adapt to new travel patterns while taking no more than our fair share from the taxpayer.

“Nobody wins when rail is disrupted. But we are contingency planning to minimise the impact of potential strike action and to keep goods and passengers moving.”

“Train operating companies have praised our members for being key workers during the pandemic, but have refused to keep staff pay in line with inflation and soaring living costs.

“A national rail strike will bring the country to a standstill, but our members’ livelihoods and passenger safety are our priorities.”

The union also announced it intends to ballot members in Scotland, following what it describes as a “derisory” 2.2 percent pay offer by ScotRail.

The Department for Transport said: “With passenger numbers down and our railways on life support, we need to act to make them fit for the future.

“The unions should talk to us about the proposals, before causing irreparable damage to our railways. Strikes should be the last resort, not the first.”