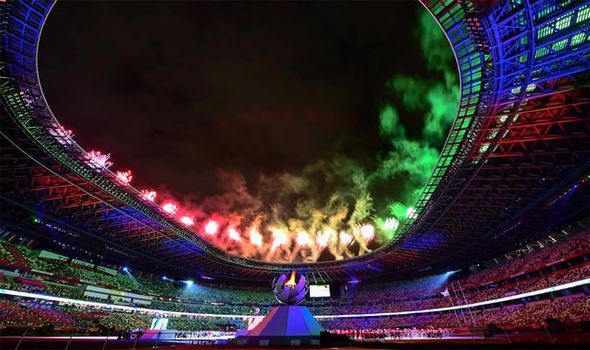 The pandemic meant that crowds were kept away from the giant send-off at Japan National Stadium.

But fireworks set the scene for a montage of the 12-day Games’ best moments.

Boccia gold medallist David Smith said it was an “unbelievable honour” to be flagbearer for ParalympicsGB as millions watched on TV.

The Queen praised the athletes for their achievements.

She said: “I offer my warm congratulations to Paralympic athletes from Great Britain and Northern Ireland, and indeed to the athletes of all Commonwealth countries, on their enormous success.

“The commitment, dedication and adaptability shown by you, and your support teams, during the exceptional circumstances of the last 18 months has been inspirational.

“Your performances have lifted the nation. I send my very best wishes to all those who have contributed.”

Projections flashed across the arena as neon-decked BMX riders and dancers raised a sign that read: “Thank you to all the Paralympians.”

Teams attached reflective discs on a miniature Tokyo Skytree – at 2,080ft, the original is the world’s tallest tower.

But there was disappointment for London 2012 wheelchair legend and six-time gold medallist David Weir who finished fifth in the T54 marathon.

Britain ended up second to China in the medal table, with 41 golds, 38 silvers and 45 bronzes in a total of 124 gongs.

GB athletes won medals in 18 of 19 sports they entered – only shooting missed out – to become the all-time most successful Paralympic nation.

Gaz Choudhry, who trained the basketball team after head coach Haj Bhania tested positive for Covid before leaving for Japan, said: “It definitely feels more than a bronze.”

He said: “I’d like to think I can inspire other kids with dwarfism at home.”

ParalympicsGB chef de mission Penny Briscoe praised the squad – including cyclist Dame Sarah Storey, 43, whose 17th gold made her the most successful Paralympian of all time – for “an absolutely phenomenal effort”.

The Winter Paralympics begin in Beijing in six months; the next summer Games take place in Paris in 2024.

PARALYMPICS GB’S performance in Tokyo has been inspirational, with 228 British athletes giving their all on the track, the pitch, the court and in the water.

The years of dedication and determination paid off too, with the team bringing home 124 medals and setting many world records.

Dame Sarah Storey became the most decorated Paralympian ever, every member of the cycling team won a medal, and swimmer Ellie Robinson gave a fabulous interview, reminding us that every athlete’s journey to Tokyo was a personal triumph.

As they did in London 2012 and in Rio 2016, the Paralympians smashed through common misconceptions about disability.

I was privileged enough to watch our athletes in Japan as they took on the world. I proudly waved the Union Flag and cheered them on from the stands.

Supporting our Paralympians gave me the opportunity to hear first-hand what life is like for people with a disability in the UK, and to ask for their thoughts on our new Disability Strategy.

With preparations already underway for Paris 2024, the Government recently announced an increase in support for Paralympic sports through UK Sport; £61.8million of funding is available for the next Paralympic Games.

I am also delighted that Sport England will invest £40million this year in a Tackling Inequalities Fund, with a specific focus on disabled people.

This is great for our top athletes and for those in grassroots clubs.

Sport builds life skills, so improving accessibility in sport will help enable the UK to become a nation of equal opportunity on and off the field.

That is just one aspect of improving opportunities though, and the Government has made over 100 commitments to reform the daily lives of disabled people through our National Disability Strategy, so everyone has the same opportunities to fulfil their potential.

By enhancing access to jobs, transport, education, justice and public services, we will enable disabled people to have the same chance of success as anyone else in every path they choose.

For many, yesterday’s closing ceremony will have marked the end of a phenomenal summer of sport.

The action is far from over though, as we look forward to welcoming the world’s elite wheelchair athletes at the London Marathon next month.

And next year we host two major sporting events – the Commonwealth Games in Birmingham, in which Parasports will be a key feature, followed by the Rugby League Wheelchair World Cup.

Through their efforts in Tokyo, our Paralympic athletes have inspired thousands of young people across the UK to break down barriers and prove they are impossible to ignore.

Thank you. You did us proud, Paralympics GB.