LONDON — The weekly clapping in support of health workers by Britons during the first part of the pandemic has petered out. The government has mostly stopped asking people to stay home and avoid the virus to keep the National Health Service from being overwhelmed. Campaigns to feed and house exhausted health workers have dwindled.

As Britain becomes subsumed by a second wave of coronavirus infections and deaths, the country’s doctors and nurses are bracing for what is expected to be a deluge of new patients over the next six months. But unlike in the spring, they say they are now facing the pandemic without the same sense of caution among a coronavirus-weary public, or a clear government strategy to contain the virus and deal with rapidly filling intensive care units.

As a result, morale is wilting among overstretched health workers. Hospitals have canceled nonessential operations and transferred patients to nearby facilities, a result of crowding caused in part by the government’s effort to restart elective procedures halted in the spring. Some emergency units are already telling non-urgent patients to stay away again.

“We’ve been through it once before, and it wasn’t very nice, but there was an end to it,” said Dr. Alison Pittard, the dean of the Faculty of Intensive Care Medicine. “Whereas now, this is going to go on for much longer. We did not and do not have enough staff.”

When the coronavirus first hit Britain in the spring, the National Health Service ordered hospitals to empty beds and stop elective procedures. Heeding government appeals, many people stayed away by choice. 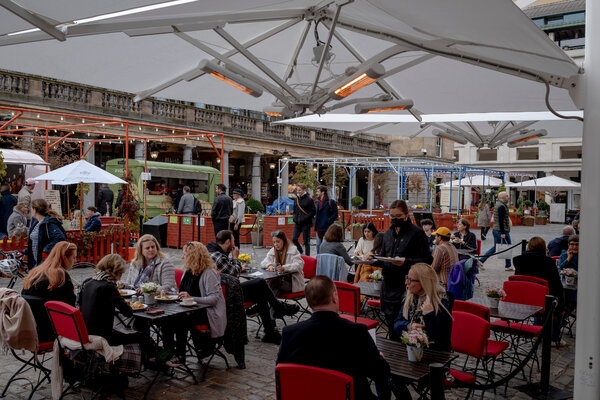 Politicians across the political spectrum largely accepted the need for the first lockdown, and doctors limped through the crisis, fueled by adrenaline and the hope that the government could keep an eventual resurgence of cases from inundating the health service again.

But that has not happened. With 367 deaths and 22,885 confirmed cases on Tuesday alone, Britain has become swamped by a second wave of infections that could pose an even bigger test than the first wave of its overextended health service.

“We’re caught between the tension of saying the N.H.S. can’t do what it did last time, which is shut itself down, but on the other hand it can’t carry on as normal and pretend that Covid isn’t around,” said Dr. Rob Barnett, the secretary of a local medical committee that represents general practitioners in Liverpool, which has been swamped by new cases. “One’s walking a tightrope trying to balance those two sides of the equation.”

The situation is hardly better elsewhere in Europe. Belgian hospitals are so overwhelmed that officials asked doctors infected with the coronavirus to work if they were not showing symptoms. Dutch hospitals have begun airlifting patients to intensive care units in Germany, the first such transfers since spring.

In many ways, doctors in Britain are better equipped to handle the second wave of a pandemic that has killed roughly 60,000 people in the country, the highest toll in Europe.

The scarcities that panicked doctors in March — of face masks, testing kits and oxygen — have largely been alleviated. Doctors have learned to delay using ventilators.

But a decision by England’s health service to restore normal services has meant that there are fewer unoccupied hospital beds than there were in the spring, and fewer doctors who can redeploy to coronavirus wards.

Making matters worse, hospitals are already treating the usual wintertime stream of flus and other illnesses that, even in a normal year, can push bed occupancy rates past 95 percent. Those difficulties became more pronounced after Prime Minister Boris Johnson’s Conservative Party came to power in 2010, and the health service’s annual budget increases were trimmed, leading to longer waiting times in hospitals and more overstretched staff.

While the country pulled together around its health workers in the spring, relations have badly frayed in the second wave. Local and national officials have squabbled over the accuracy of patient figures as the government seeks to negotiate lockdowns with reluctant cities. And some right-wing newspapers have attacked the health service for focusing on the coronavirus at the expense of other patients.

“There is some disbelief that you’ve had six months to prepare for this and why haven’t you been training more nurses,” said Dr. Tamás Szakmany, an intensive care doctor in Newport, Wales. But, he said, “it’s not just like you’ve got a car factory and you suddenly need more transmissions, so you train the factory workers to build more transmissions. It’s just not that simple.”

Among doctors and nurses, a sense of battle fatigue has set in. Extra weekend shifts that were intended to be temporary have lasted through the summer, especially in northern cities where coronavirus wards remained busy even as a national lockdown was lifted in the summer. Health workers are calling in sick, many of them with anxiety and depression.

Rapid testing remains scarce for doctors and nurses. And health workers on coronavirus wards are supplied only with basic surgical masks, not the heavier-duty N-95 masks reserved for intensive care units.

“The first time around, it’s almost like a once-in-a-lifetime kind of medical challenge,” said Paul Whitaker, a respiratory doctor in Bradford, in northern England, where the number of coronavirus patients has returned to its early May peak.

“The hospital provided packed lunches for us all,” Dr. Whitaker added. “People were sending good luck messages. But the prospect of going into another six months, which is almost certainly what it’s going to be, is relatively frightening. How are you going to maintain the morale, the focus and the energy of all these people?”

In the ex-mining and manufacturing towns in England’s north that have been hit hardest by the latest surge of infections, doctors are especially harried. Nearly 40 percent of critically ill patients are now classified as the country’s most deprived, compared to a quarter of such patients in the spring and early summer.

Some doctors worry that hospitals in poorer parts of the country may need to restrict elective procedures over winter, risking painful conditions going untreated until next year.

“That loss of activity is going to be unequally distributed,” said Dr. John Wright of the Bradford Royal Infirmary. “If you’re living in Bradford or poorer places, there’s a double whammy. Health services are so focused on dealing with cases of the virus that they’re missing everything else.”

For doctors on coronavirus wards, what was once supposed to be a temporary mobilization against a new and frightening illness has, in short order, become their focus for the foreseeable future.

Whereas the springtime surge in cases seemed to many doctors like a natural disaster, the second wave has all the fingerprints of a government and a society that failed to control the virus, they said.

“At the time, it felt like the thing to do because it was unavoidable and we had to do our bit,” said Tom Lawton, an intensive care doctor in Bradford. “It was that kind of Blitz spirit. Whereas this time it feels like this could have been avoided, and clearly it has been avoided in a number of countries.”