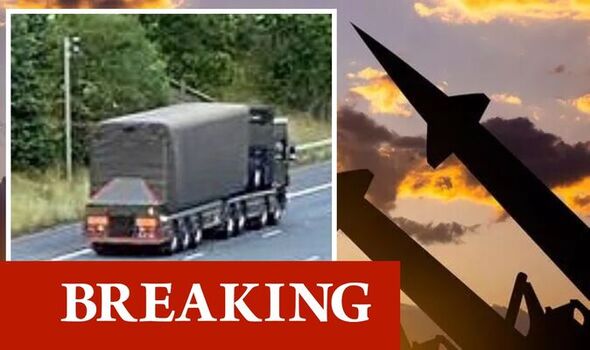 Britain’s nuclear convoy was today seen moving from England to Scotland. The journey is understood to have taken two days, according to NukewatchUK.

The Twitter account reported: “Yet another UK nuclear bomb convoy has made a two-day journey from Aldermaston/Burghfield to Coulport on Loch Long.

A photo shared on social media shows to military-style lorries on the M74 today.

This would put the total number of warheads being transported to four, if NukewatchUK’s estimates are correct.

Another Twitter user, @IndyTom3, said the convey crossed the Kingston bridge on the M8 just before 2pm today.

They added that this is “Scotland’s busiest road bridge running right through the centre of the city”.

News of the movement prompted many questions on social media as to the promoter of the journey.

Former submariner and police officer @SMACT72 describe it as “normal”.

They wrote: “These are normal movements.

“The UK being responsible custodians of these weapons takes care to maintain them correctly.

“Even if there was an accident there is no chance one detonating.”