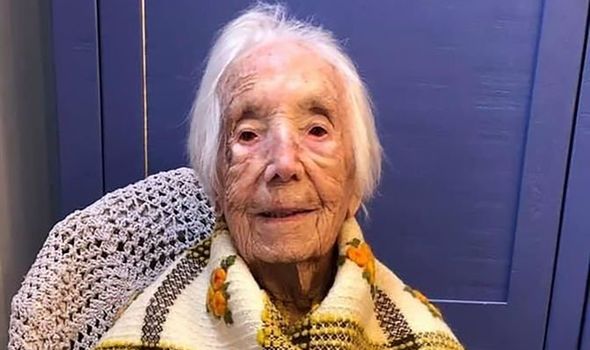 Amy Winifred Hawkins, who was described as an “indomitable and lovely” woman, recently found fame singing on social media TikTok. The great-grandmother, who was the sixth oldest woman in the UK, was taken to hospital with COVID-19 last week but her condition quickly deteriorated.

Mrs Hawkins, who lived in Monmouth, south Wales with four generations of her family, died in hospital on Thursday, four months after her sister Lillian passed away at 101.

“I think her sister’s death possibly had an effect on her,” Ms Hawkins’ daughter Rozi said today.

“After that was probably when she started to go downhill. She went to see her every week and they were very close. It’s nice really that mum didn’t have to go on too long without her sister.

“We all got Covid but mum didn’t have any symptoms. She’d been going downhill for a couple of months really.

“She was there (in hospital) for a week and we went to see her on Wednesday afternoon and she was struggling then. We said ‘goodbye’ and cwtched her and then in the early hours of Thursday morning the hospital rang and told us she’d died.

“I’m not sure she died as a result of Covid really. She has never had any illness all her life. She couldn’t eat terribly well in the weeks before her death, which probably contributed more [to her death].”

She was lovely and she just cared about other people really more than herself. She was great

Describing her mother, Rozi added: “Indomitable. She was lovely and she just cared about other people really more than herself. She was great.”

Born in Cardiff, Mrs Hawkins spent time as a window dresser and married sign writer George Hawkins in 1937. She served as a fire-watcher during World War Two.

The couple lived in nearby Newport but, after Mr Hawkins died in 1996, Mrs Hawkins moved in with her large family in Monmouth, including her two grandchildren Tamzin and Hannah.

While Rozi said the last 18 months has been difficult during the pandemic, with her mother being unable to celebrate her 110th birthday or travel to France for her annual holiday, the pensioner’s brush with TikTok fame had been the source of much laughter.

“She found it very amusing. You couldn’t interview her well because she was so deaf but she enjoyed it.”

In January, Mrs Hawkins’ family plans to celebrate her life at the Bell pub in Redbrook where she celebrated every birthday in her later years other than her last.

Asked whether she thought it was a coincidence Mrs Hawkins and her sister lived for so long Rozi said: “I suppose they just believed in a reasonable diet.

“Neither of them smoked or drank. They just lived their lives. And mum lived a very happy life.”

When asked last year why she thought she’d lived so long, Mrs Hawkins joked it was because she never went to the doctor.