A ‘pothole crisis’ is gripping the UK – and it’s all down to the winter freeze which has left roads blighted with cracks and holes.

Experts say that ‘rapid freeze and thawing cycles’ have made the situation far worse than usual.

Around 60% of drivers think the roads are worse than a year ago, according to the RAC, and naming road surface quality as the main issue.

And it’s not surprising, when potholes cause the likes of broken alloys, cracked wheel arches and burst tyres.

Dazie Warne, 27, hit a water-filled pothole in Ashford, Kent, on New Year’s Eve and damaged both her front and back tyre on one side.

She said: ‘I pulled into the tyre garage two minutes away from where it happened.

‘Three other people pulled in while I was there waiting to get picked up. They had all just gone down that same pothole.’

Another driver, Declan Moriarty, 32, paid £120 to fix his tyre after hitting a pothole on the A20 in Kent, creating a dangerous bulge in the tyre surface. 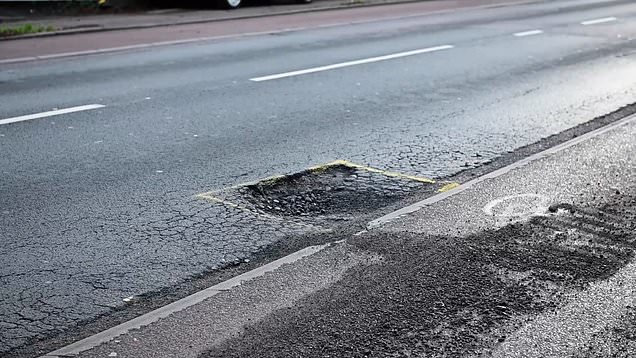 Despite this Kent County Council denied his claim for reimbursement because the damage was deemed ‘non-critical’.

But according to the AA potholes only cost an average of £39.80 each to fix.

David Ward, secretary of Tenterden Labour branch in Kent described the situation in his county as ‘deadly serious’.

He said: ‘It is very concerning as there are about 20 potholes in East Cross – the whole road surface is breaking up.

‘It is reaching ludicrous proportions. It is an astonishing degree of neglect and it’s just a matter of time before someone is hurt.’

The problem is also bad in Scotland because only 15.76% of pothole claims were paid out in 2021-2022, but it was the city of Glasgow that saw the lowest rate of compensation for pothole damage.

Meanwhile in Glasgow, Paul Christopher Clements hit a pothole that he says shredded his tyre in the Bannerman area on January 3.

This is despite the road being reported to the council multiple times in 2022.

When he phoned Glasgow City Council, he claims he was told there was ‘nothing they could do’.

A spokesperson from Kent County Council said: ‘Due to the weather we have experienced of late; wet, sub-zero for a period, the freeze and the thaw cycle rapidly increases areas of deterioration into potholes.

‘We will continue to monitor and take any necessary action.

‘We are currently working through all reported ones and will raise jobs to have these repaired as soon as possible.

‘We continue to encourage the public to report all issues via our website.’