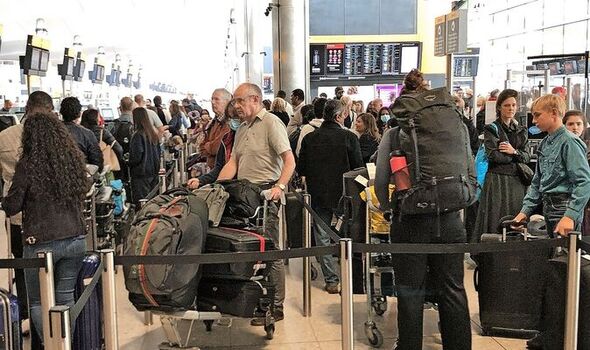 As check-in carnage, strike chaos and cancellations continue to torpedo the travel plans of Covid weary families, airport bosses and carriers moved to reassure them the great getaway in a few weeks time is most definitely on. The move comes 21-days before schools break up and amid heightened panic long-awaited sunshine breaks could be axed at the last minute.

Some 20 millions Brits are planning to jet off over the next three months with the sun-soaked Spanish Balearics and Portuguese Algarve among the most popular destinations.

Andrew Flintham, managing director of Britain’s biggest holiday company TUI, told the Daily Express he could “personally assure” customers would get to where they wanted to go.

He said: “We’re confident we’ve got the staff we need to get customers away on their well-deserved holidays this summer and in the rare event that they face any disruption we will give them as much notice and support as possible.”

By the time most fly away more than two years will have passed since Britain was plunged into its first lockdown misery on March 23, 2020.

For many this summer will be the first chance to enjoy a restriction-free family holiday since 2019. Most pre-booked getaways months ago but have been spooked by eerily frequent scenes at major hubs where flights have been cancelled without notice due to passenger numbers exceeding the airport’s maximum capacity.

Others have been left navigating hours-long queues for check-in with scant information. It has led to widespread panic at what the peak travel season could bring.

But despite the chaos, the appetite to leave the misery of soaring food, fuel and energy costs in Britain behind has never been greater.

Industry experts Expedia say searches for flights, hotels and holiday homes are all significantly up compared to last summer, with breaks in destinations like Turkey being snapped up because of favourable exchange rates. The Turkish lira has fallen considerably against the pound, meaning hard-pressed but savvy families seeking value-for-money destinations can make their money go further in resorts like Dalaman, Bodrum and Anyalya.

But Brits are sticking to what they know and like. Based on bookings for this month and August, the top three summer holiday hotspots are the perennially-popular Spanish Balearics of Mallorca, Menorca, Ibiza, and Formentera, the mainland Costa del Sol strip, and Portuguese Algarve.

But for months furious travellers have endured cancelled flights, endless queues and lost luggage as demand for getaways continues to surge.

Meanwhile, tens of thousands were left high and dry when Heathrow axed 30 flights, saying staff could not handle them. Some passengers only found out their flights had been cancelled when they arrived at the airport.

Airport queues were once again lengthy at Heathrow’s Terminal 2 on Friday and at Manchester Airport.

The number of flights leaving Gatwick each day have been capped because there are not enough staff to meet demand.

The chaos forced ministers to issue an ultimatum, saying slack scheduling and poor planning had torpedoed the plans of tens of thousands of blameless travellers, and told airports and carriers to get their houses in order. 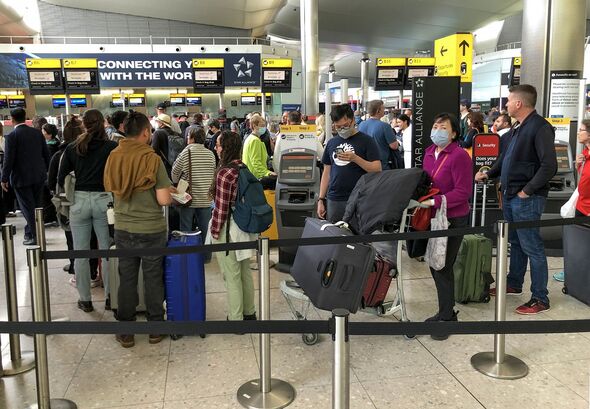 A Heathrow spokesman said: “Passenger numbers are higher now than at any time since the start of the pandemic – and growing. We have faced 40 years of growth in just four months and that has put the entire aviation industry under pressure.

“We expect an extremely busy summer season and we’re working hard to ramp-up our operations for the summer peak as quickly as we can with the same level of security officers this summer as in 2019 and we have reopened Terminal 4 which will be serving over 30 airlines by mid-July.

“Our operating plan is working and the vast majority of passengers have had good, predictable journeys. For the small number who experienced pinch points or disruption at Heathrow we apologise and reassure you we are doing everything we can to ensure summer goes as smoothly as possible.”

A Gatwick Airport spokesman said: “We introduced the cap on flight numbers this summer in cooperation with our airlines, so the flight numbers we set are based on the ground handling resources the airlines will have – so we are confident this measure will stop the last minute cancellations and will mean airlines will fly more realistic and achievable flying schedules.”

Easyjet, which will fly 250,000 passengers a day at the height of the summer season, added: “Delivering a safe and reliable operation in this challenging operating environment so we can take our customers away on their holidays this summer is easyJet’s highest priority.

“We have taken pre-emptive actions to build further resilience over summer and ensure we deliver, including some advance cancellations with most customers rebooked on alternative flights, as well as extending our customer service hours and adding more people to our customer service team than ever before. We continue to explore all possible options to further enhance the support we provide our customers this summer.”