The head of the Royal Air Force dismissed two Russian patrol aircraft as “relics of the Cold War” in a rare public rebuke after British jets were forced to scramble to intercept them.

The Typhoon fighters launched from an airbase in Lossiemouth, Moray, as the Russian planes flew close to Norway, the Ministry of Defence said.

The Quick Reaction Alert (QRA) jets were supported by a refuelling tanker aircraft, which flew from RAF Brize Norton in Oxfordshire.

Working with the Norwegian air force, the jets tracked the Tu-142 ‘BEAR-F’ aircraft, which stayed in international airspace over the Norwegian Sea and the North Sea.

The Russian activity at a time of crisis because of the coronavirus pandemic was condemned by Air Chief Marshal Mike Wigston, Chief of the Air Staff. 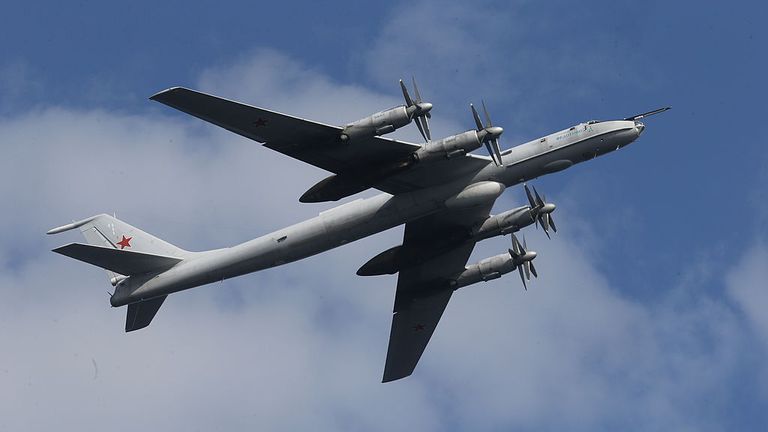 “These Russian bombers are relics of the Cold War, do not comply with international air traffic regulations and are a hazard to civilian and military aircraft,” he said.

“Despite the global pandemic, the Royal Air Force and our allies continue to ensure Russian military flights pose no threat to NATO and UK airspace.”

The MoD also released a comment from one of the fast jet pilots.

“After scrambling to intercept the two Russian aircraft, we were in close contact with battlespace managers from the RAF and Norway, who directed us towards the aircraft and relayed orders throughout, ensuring we could confirm where they were and what they were doing at all times,” said the pilot, whose name has not been released. Separately, HMS Queen Elizabeth – one of the Royal Navy’s two largest warships – has set sail on a training exercise.

The aircraft carrier’s departure had been delayed by a couple of days to allow all of the crew to be tested for COVID-19.

Armed forces minister James Heappey tweeted: “HMS Queen Elizabeth sails this evening not in response to COVID-19, nor to counter any immediate threat, but because we need our armed forces trained and ready for the uncertain world that waits beyond.”

The aircraft carrier is working up to become fully operational by the end of the year.