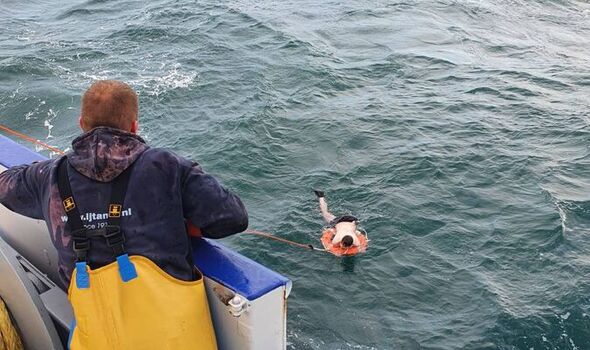 A British kayaker who capsized at sea survived 12 days on a diet of seaweed and raw crabs and mussels. The 28-year-old, who has not been named, was found by Dutch fishermen clinging to a buoy in the middle of the sea after trying to kayak across the Channel to France.

He could not tell them how long he had been in the water but told them “he wanted to go to the other side” and had capsized.

The man had set off from Dover on October 15 and was exhausted, dehydrated, and severely hypothermic when he was found “waving like a madman” by the crew of The Madeleine yesterday morning.

The ship’s captain Teunis de Boer told NOS: “I was filling in my electronic logbook when I suddenly saw something move on that buoy. I grabbed my binoculars and saw someone in a bathing suit on the buoy, waving like crazy.

“I gave a sound signal to show that I had seen him. There was quite a strong current, so we sailed toward him with our heads in the current.”

“When we were about ten meters from the buoy, we threw life buoys into the water. He caught it.”

When they hoisted the exhausted man aboard he couldn’t say how long he had been in the water.

Captain de Boer added: “He said he wanted to go to the other side and had capsized.”

“He was covered in bruises and said he had kept himself alive by scraping mussels from the buoy and eating crabs and seaweed.”

“We dried him off and let him warm up in the galley. He drank a few litres of water in no time.”

“He hadn’t slept for days. His eyes were deep in his sockets.”

The Madeleine, with three Dutch and two French fishers on board, called the French coastguard, which sent a helicopter with a doctor to the boat. The man was then taken to hospital in Boulogne-sur-Mer, where he is said to be conscious but in the intensive care unit.

And speaking to Dutch newspaper De Telegraaf the captain said: “It is a miracle he survived.”

This is even more miraculous because the captain said he and his crew never planned to be in those waters.

He added: “It was not the plan at all to fish in that region, but we went sailing after the catch in the morning was a bit disappointing.”

“He looked a bit confused, so we don’t know exactly how long [he was on the buoy].”

“You can bet that you can’t sleep on such a buoy, especially with the rough weather of the past few days.”

“He was very grateful. Talking cost him too much strength, so he made heart movements with his hand at us.”

“We are just happy that we can do something for our fellow human beings.”