Brexiteer MEP John Flak recorded a video of himself voting in the EU parliament and told viewers to count how many times he has to vote in quick succession. The MEP also mocked Remainers for wanting to stay a part of the EU while also calling into question the “democracy of the EU”. In the short 45 second video, Mr Flak can be seen raising his hand 12 times to vote on road safety legislation while making glances at the recording camera.

The East of England MEP has campaigned the UK for leaving the European Union for over 20 years.

Regarding a second referendum, the MEP has made his views clear that the “debate is over”.

He said: “The In/Out debate is over, the people have spoken.

“I am proud to have played my part in freeing us from the chains of creeping integration. 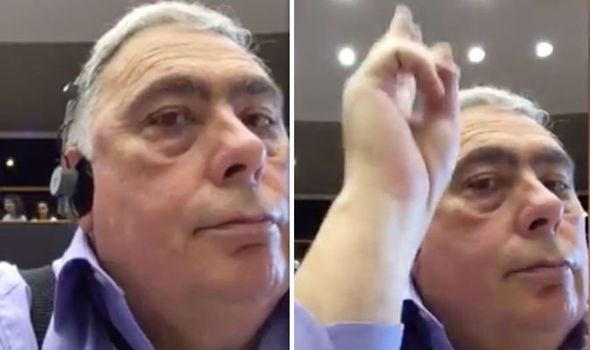 “But I’m not about helping the UK get the best possible Brexit deal and to agree a new, deep, special relationship with the remaining EU27.

“In the longer term, we will not turn our back on Europe.

“We will continue to trade and cooperate on important areas like security and environment protection.

“But we will also once again be freely engaged with the wider world, free from the basically socialist inspired constraints of many in the EU.

Brexiteer MPs have often claimed that one of the core reasons for Brexit is UK voters wanting to be free from the jurisdiction of the European Court of Justice.

In addition to this, they wish to govern the laws of the land themselves rather than have input from the European Union.

With Brexit uncertainty still an issue, Brexiteer MPs and MEP’s fear Theresa May will opt for a soft Brexit that could see the UK still tied closely to the EU.