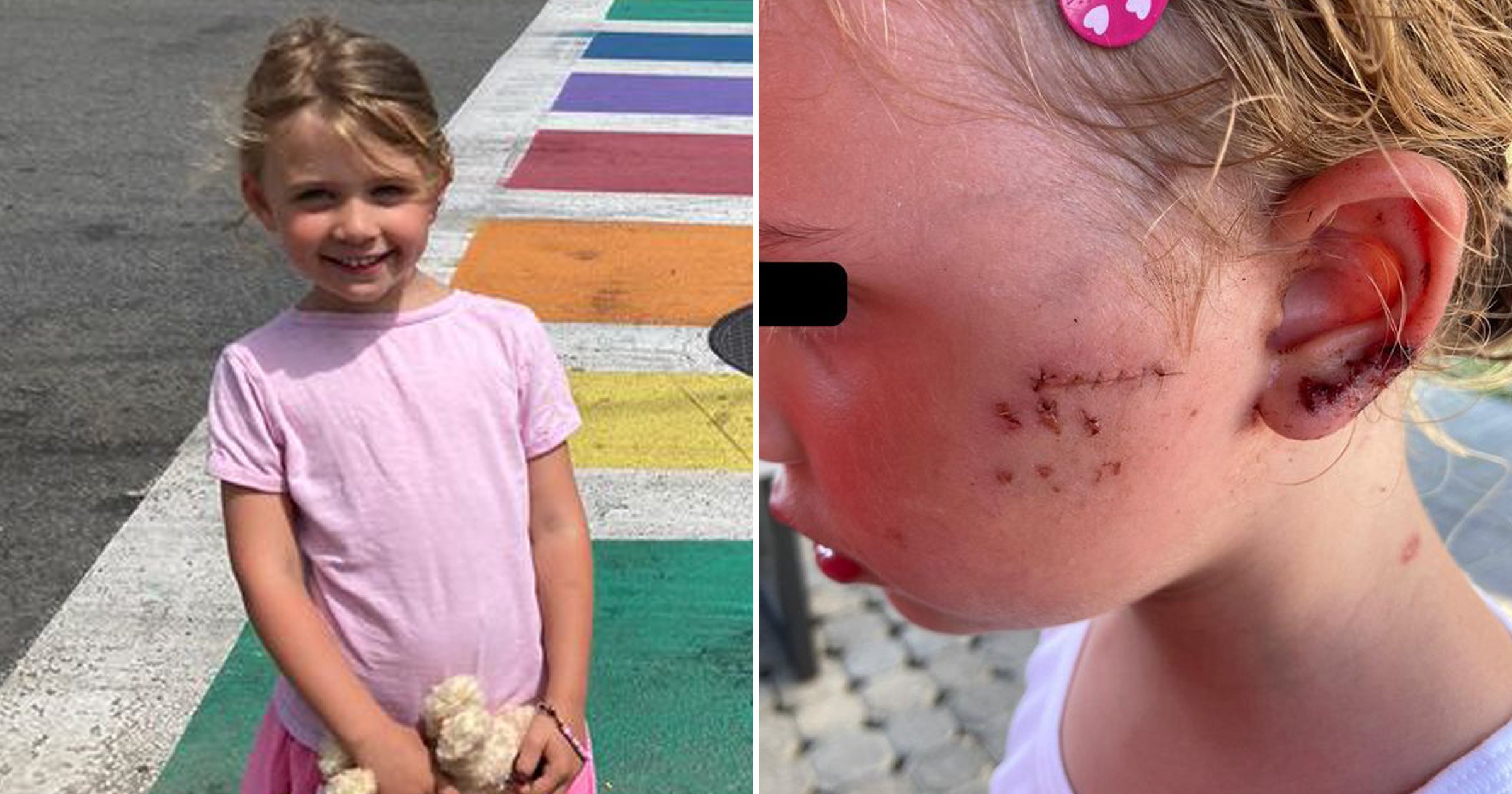 A little girl had her ear mauled off when a coyote attacked her face while she was lying on the beach.

Elodie Lewis, three, and her family, from Morden in South London, were watching the sunset on a beach on August 11 when a wild coyote attacked her face, leaving her needing surgery to reattach her ear.

Elodie’s mum Megan had taken her kids to North Herring Cove Beach near Provincetown, in Massachusetts, where Megan had visited as a child herself.

She told MyLondon: ‘We decided to stay out and watch the stars as the sun was fading, lying on a blanket looking up.

‘Elodie was few feet away and suddenly we heard her scream, look over and it looked like a massive dog.

‘My husband was there in two steps and screamed at the coyote to go away and it backed off a little.’

Megan still thought it was a dog, until her and Elodie’s dad Michael got their daughter back to the car where they could shine a light on her face – to see ‘blood everywhere’.

There was no signal at the remote beach and the family had to drive up the road to call an ambulance but the nearest hospital was still an hour away.

Megan said: ‘Her ear was basically hanging off. It was completely mutilated and she had cuts on her face and her neck.’

Elodie arrived at the hospital where doctors and nurses gave the little girl painkillers while a plastic surgeon fixed her face.

Megan said: ‘Her injuries have healed so beautifully. I think part of that is that there was a plastic surgeon on call. She’ll have a scar on the back of her neck but her face should recover. He managed to fix her ear, put the four pieces back together.’

The distressed mum said: ‘Our insurance might not even be able to cover it. But I was told it’s going to be held against us that we didn’t call them before any medical procedures took place.

‘Even if we could have called them I was focused on my daughter – if she was going to be okay, if she had rabies. Calling them would have been the last thing I‘d have thought of.’

The family have set up a fundraiser to cover any incoming medical bills.

Megan said: ‘I’m worried we’ll have to re-mortgage our home, it’s more than our life savings. There’s no way we’ll be able to pay it.’

Although Elodie’s physical injuries are healing well, she is still struggling to cope with the after effects.

Megan said: ‘I’m not sure (Elodie) can really understand what happened. She was so outgoing and now I have to pry her off me when I drop her at nursery. She’s more afraid of the dark.’

The mum has also spoken out about the lack of protective measures around the beach – where there have apparently been several coyote attacks in the last few years.

Megan said: ‘They know there was a coyote problem but there was no signage or anything. After Elodie’s attack they had put signs all over the beach warning people of the coyotes.

‘They need bleed kits and SOS phones. It’s imperative they do. If this had to happen to my child, I want something positive to come from it.’