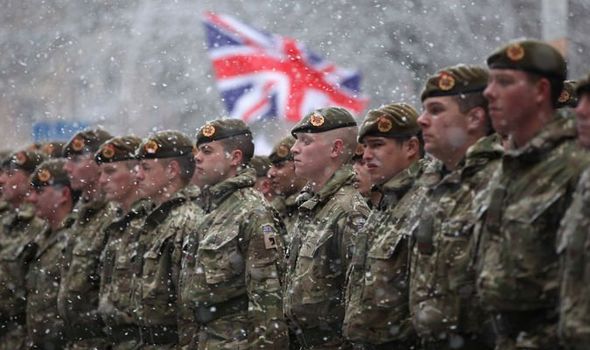 People worry about careers in the military because film and TV shows often make veterans seem “damaged”, the study of 2,000 adults found. In fact, a fifth revealed they would have been more likely to consider signing up if serving and ex-serving military personnel were portrayed on screen more positively. Armed forces charity and media organisation, BFBS, commissioned the study as part of its Life After Service campaign to encourage the wider public to re-evaluate their perceptions of veterans.

From today, BFBS will be running positive stories about ex-servicemen and women every day to provide a different perspective – away from stories about unemployment and mental health issues.

Johnny Mercer, the Minister for Defence People and Veterans, said: “We have a responsibility to make sure that our personnel are supported and well prepared to re-enter civilian society.

“And the vast majority of people who leave a service career go on to lead successful civilian lives.

“But those stories often go untold, leaving the general public unaware of the exciting doors that military training and leadership skills can open – BFBS are telling the other side of the veteran story.”

Uncovering the nation’s perceptions of veterans, the study also revealed a third believe it’s difficult for them to go on to have a successful life and career after service.

Almost half – 45 per cent – think those leaving the military will struggle to find another job and a third believe they won’t become homeowners.

Similarly, a quarter said veterans are not likely to ever become a CEO of a company.

And 63 percent are under the impression ex-forces are more likely to have mental health issues than those from other professions.

As a result, two-thirds admitted they have never considered the military as a career route due to concerns around PTSD, mental health issues and missing home comforts.

Interestingly, more than a third of those polled feel there needs to be more positive stories about career opportunities after the military.

While a fifth wish they knew more about the different roles available.

Simon Bucks, the CEO of BFBS said: “It’s concerning how many people in the UK mistakenly believe that veterans are more damaged than the average person – and that ex-servicemen and women don’t go on to have successful careers after the military.

“We know from research by the Centre for Medical Heath that rates of mental illness amongst UK veterans are lower than that of the wider population: one in five compared with one in four in the general population.

Plus, we know that 81 percent of veterans are in full time or part time employment.

“As a military media organisation we regularly meet veterans enjoying very fulfilled and successful lives after service, but so often these stories are simply not told by the media.

“We want to change this with our ‘Life After Service’ campaign by bringing the public’s attention to all the fantastic things people go on to do and achieve when they leave the armed forces, helping to paint a more balanced and realistic picture of what life can be like after leaving the military.”

Natalie McCombe, who left the armed forces five years ago, said: “There is absolutely life after service.

“I had a confidence and a motivation about me and I think I could have possibly stepped into any role. It gave me the grounding to go on and have the career that I had.”

And Tom Vila, who is now an Operations Director, said: “For anyone thinking about joining the army now I think I’d say absolutely do it.

“You’ll learn so much, you’ll learn how to work as a team, how to overcome challenges and that will just completely set you up for life.”

The research also found 28 percent of those polled think everyone who has served in the armed forces will suffer from PTSD and a sixth believe they will generally end up with low paying jobs.

More than a third of those currently at an early stage of their career said they had considered a profession in the military but never joined, with a quarter saying they wished there was more encouragement to join.

However, 46 percent of those new to the working world never thought of signing up, with a fifth worried about PTSD while a tenth think they wouldn’t be able to hold down a relationship at the same time.

As a result of people’s perceptions, more than a third associate PTSD with veterans while a sixth even relate homelessness and alcohol problems to ex-servicemen and women.

Despite this, seven in 10 said they have a lot of respect for those who have carved a career in the armed forces and 58 percent think it would be “rewarding”.

To read some of the inspiring ex-service and veteran stories please head to www.forces.net/lifeafterservice.