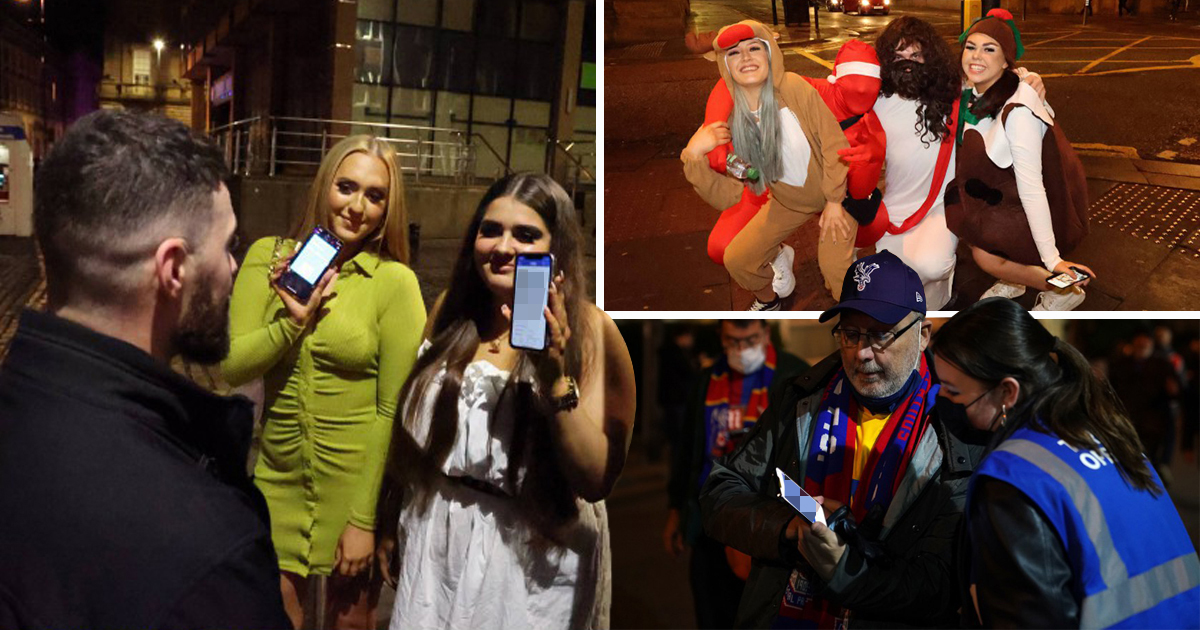 Omicron is tearing across the UK, with the highest number of new coronavirus cases since the pandemic started reported on Wednesday.

Boris Johnson says he will not be introducing more restrictions before Christmas, despite his top scientific advisors telling the public to avoid social contact.

Revellers refused to let their Christmas plans be destroyed as they hit the town in Newcastle on Wednesday.

Under Government Plan B restrictions brought in yesterday, people in England must show a Covid pass to get into large events.

Bouncers were pictured checking for proof of double vaccination or a negative test as dozens of partygoers queued for nightclubs.

Football fans were also seen following the new rules as they lined up to watch Crystal Palace vs Southampton at Selhurst Park in London.

He said there are now ‘two epidemics on top of one and other’ – an existing Delta one that is ‘roughly flat’ and a ‘growing Omicron one’.

People have been advised to ‘not mix you don’t have to’, despite there being no formal restrictions on socialising.

‘Because otherwise the risk of someone getting infected at something that doesn’t really matter to them and then not being able to do the things that matter to them obviously goes up.’

The prime minister has refused to cancel Christmas parties, despite telling millions to work from home.

In comments that have been criticised as ‘vague’, he said: ‘I agree totally with Chris about the response we’re already seeing from everybody, our general instinct to be more cautious.

‘I said many times that I thought this Christmas will be considerably better than last Christmas and I stick to that.

‘What we are saying is think carefully before you go. What kind of event is it? Are you likely to meet people who are vulnerable, are you going to meet loads of people you haven’t met before? And get a test.’

It comes after Scotland’s First Minister Nicola Sturgeon gave specific guidance urging people to limit their socialising to three households before and after Christmas.