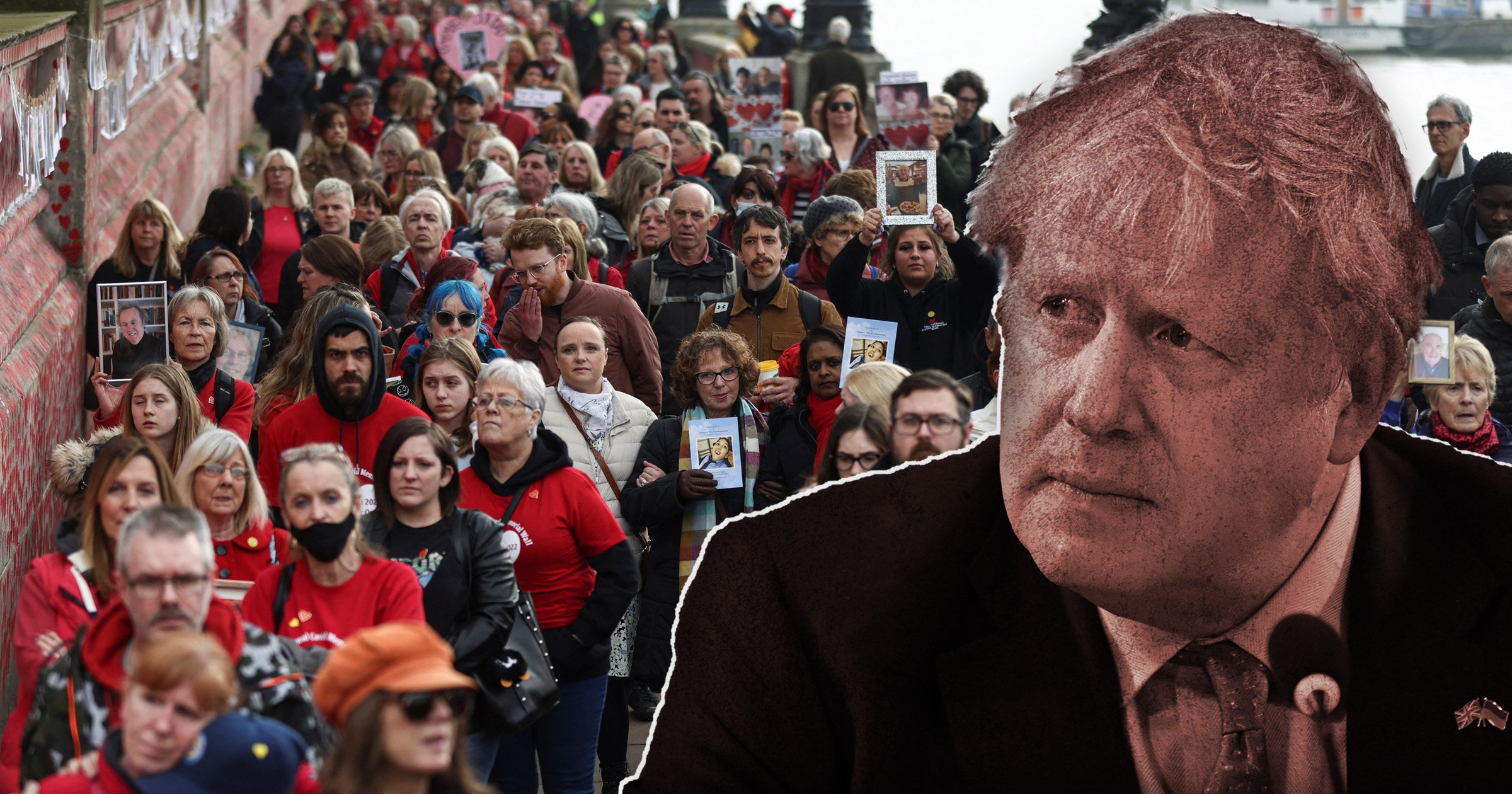 Bereaved relatives tearfully called on Boris Johnson to ‘hold his head in shame’ and resign over lockdown-breaking parties in Whitehall.

They called for the Prime Minister to stand down as they led a silent procession to Downing Street for coronavirus victims.

Hundreds of grief-stricken families gathered at the National Covid Memorial Wall in London on Tuesday to mark its first anniversary and pay tribute to those they lost during the pandemic.

Those attending, joined by politicians including Labour MP Afzal Khan and shadow health minister Rosena Allin-Khan, then walked to No 10 to hand in a petition to make the mural permanent.

The landmark, organised by campaign group Covid-19 Bereaved Families for Justice and Led By Donkeys, features thousands of painted red hearts commemorating those who died.

Michelle Rumball, 50, who lost her mother in 2020, has helped to maintain the wall and posed outside the Prime Minister’s official residence with other organisers after heading the march.

She wept as she voiced her disappointment at alleged gatherings held across Whitehall while bereaved families were observing restrictions including limits on funeral numbers and social contact with loved ones.

Reacting to news that 20 penalties will be handed out by investigators over the parties, she said: ‘I actually don’t think the fine is enough really.

‘I think they should have actually lost their jobs… (People) died on their own and yet all these were having parties.’

Describing her mother’s funeral, Michelle added: ‘All my sisters, we all went home to our separate houses and raised a glass to my mum over Zoom, and they’re having parties. I just think it’s not fair.’

Amanda Herring-Morrell, 51, who also led the procession after losing her 54-year-old brother in the first lockdown, said: ‘The Prime Minister lied to Parliament.

‘He lied to every citizen in this nation and he should hold his head in shame, because he should resign.’

Fran Hall, 61, who works alongside the campaign group Covid-19 Bereaved Families for Justice, lost her long-term partner just weeks after they got married.

She said the Government had ‘failed us’, adding: ‘We’ve got a lifetime of grief ahead of us because they have let us down, so we feel really strongly that this matters today.

‘And that the people in Westminster have to look across the river every day at the blood-red of that wall, the blood that’s been shed because they’ve handled the pandemic so badly.’

A 19-year-old man who lost his father to Covid said the wall had served as a reminder to his family that they were not alone in their grief.

But he described the parties in Whitehall as an ‘insult’ to his family and all those who lost a loved one, adding that the Prime Minister should ‘definitely’ resign if he at any point receives a penalty.

Oliver Mousley, whose father Ian died last March aged 51, said: ‘Especially when you were having limits of 30 at funerals… It’s just insulting to us and everyone else that’s here today.’

His sister Phoebe, 25, said: ‘I just think it’s a kick in the teeth for a lot of families that have had to go through it and they’ve been on their own. And to be honest, I’m happy about the fines but I don’t think it’s enough.’

Their mum Nicola, who was about to celebrate her silver wedding anniversary with her husband before his death, said: ‘We’re just trying to make sure he doesn’t get forgotten and all these people get remembered because they deserve that.’

No 10 has denied the Prime Minister misled the House of Commons when he defended the goings-on in his home and workplace.

Johnson is not thought to be among those set to receive a fine at this stage, despite it being understood that he was present at six of the at least 12 events being investigating.

He is contesting the allegations and took advice from his personal lawyer on how to respond.

Sisters Corrina Dallas, Jackie Currie and Louise Crawford travelled down from Glasgow to pay tribute to their father John, who they said was ‘fit and healthy’ before he died.

Jackie said the decision to keep those who will be issued penalties anonymous, after other lockdown rule-breakers had been named and shamed, smacked of ‘privilege’.

The sisters tearfully recalled how just 15 people were allowed to their father’s funeral and they were not allowed to touch his coffin.

Organisers and attendees are hoping the event and the petition lead to the mural, which runs along the river Thames opposite the Houses of Parliament, to be kept indefinitely.

‘We won’t let it fade away – that’s why we’re here today,’ Michelle said. ‘It could just be forgotten, and we just can’t let that happen to all our loved ones.’

More than 100,000 people so far have signed the petition to make the wall permanent.