Janet Daley, a Brexit-supporting columnist, revealed that the European Union would be pressured into accepting UK demands if the Conservatives elect a leader who pursues a no-deal Brexit. Speaking on the BBC, Daley claimed that Prime Minister Theresa May, who resigned in an emotional speech on Friday morning, compromised “too much”. The Sunday Telegraph columnist said that whoever succeeded Mrs May should be a Brexiteer who is not afraid of a no-deal departure. 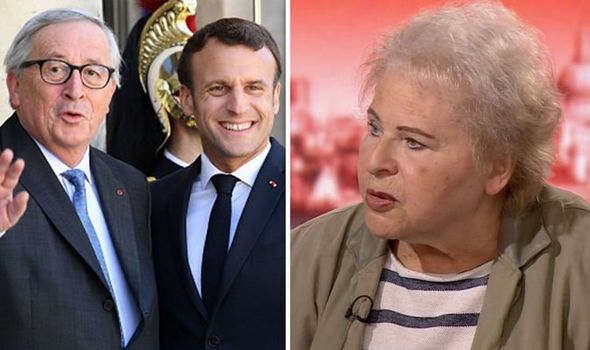 The EU reacted to Mrs May’s resignation by claiming that a new leader will not be able to change the Brexit deal agreed with the Prime Minister.

French President Emmanuel Macron urged for “rapid clarification” from Britain on what it wants.

European officials all agreed chances of a no-deal Brexit  had increased dramatically.

A Spanish government spokesman Isabel Celaa warned that “a hard Brexit appears to be a reality that is near impossible to stop”.

Speaking on this, Daley told BBC Dateline: “Macron is absolutely adamant that there is no further extension.

“The question is whether the heads of European states will be able to risk a no deal.

“It will be very disruptive to many of the economies of the European states, particularly Germany.”

May did a huge amount of compromise – but only in one direction. She gave in too much to EU demands

She added: “The EU will have to go back to their people and tell them that they didn’t make the necessary concessions to prevent a no deal.

“They will be forced to explain why they allowed a no deal to happen.

“If there’s a leader who is not ready to give up concessions to Brussels, this may happen.”

Delivering a damning verdict on the Prime Minister, Daley said: “May did a huge amount of compromise – but only in one direction. She gave in too much to EU demands.

“If there is to be compromise, it has to be two ways.”

This remark sparked outrage among her BBC Dateline guests, who suggested that Mrs May had instead given in too much to her own European Research Group MPs.

Boris Johnson, who is the clear favourite among the declared candidates, has stressed that Britain will leave October 31st with or without a deal.

A spokesman for EU Commission president Jean-Claude Juncker said “there is no change” to Brussels’s position and Dutch prime minister Mark Rutte said “the withdrawal agreement is not up for renegotiation”.

EU diplomats said they most feared a hardline Brexiteer  taking over, but predicted that if one did they would be broken down by Brussels.