ANGERS, France — As the temperature hovered around freezing, hundreds of men trickled into a former slaughterhouse on a recent Friday. In the overflow crowd outside, scores more unfurled their prayer mats on the asphalt as the imam’s voice intoned through loudspeakers.

The old slaughterhouse has served as a temporary mosque for the past 21 years for many Muslims in Angers, a city in western France. Construction on a permanent home has stalled since last fall when the City Council unanimously rejected a proposal by Muslim leaders to hand ownership of their unfinished mosque to the government of Morocco in return for its completion. Local members, after donating more than $2.8 million, were tapped out.

Building a mosque in France is a tortuous endeavor at the best of times. Members tend to be poorer than other French people. Turning to foreign donors raises a host of concerns — both inside and outside Muslim communities — that are coming under intensifying scrutiny with President Emmanuel Macron’s new law against Islamism, which is expected to get final approval in the Senate in coming weeks.

Complicating matters for Muslims has been France’s principle of secularism, called laïcité, which established a firewall between state and church. While the government regards itself as strictly neutral before all faiths, the law effectively made the state the biggest landlord of Roman Catholic churches in France and the guardian of cultural Roman Catholicism.

Under the 1905 law, no public funds can be spent toward building any religious facilities. But the law also made all religious buildings built before the statute was passed the property of the state, which maintains them and allows them to be used free for religious services.

While insignificant in 1905, France’s Muslim population has grown rapidly since the 1970s, and is believed to now number about six million, or around 10 percent of the total population. About two million of them practice their faith in 2,500 mosques that receive little or no public money, according to a 2015 Senate report. 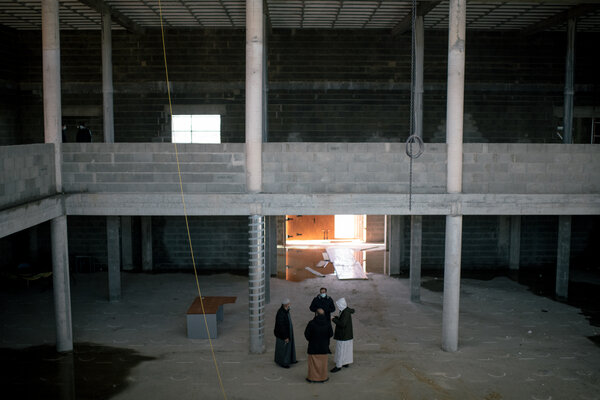 By contrast, France has 3.2 million practicing Catholics who have access to about 45,000 church buildings, 40,000 of which are owned by the government and maintained with taxpayer money, according to the report.

The disparities also touch on everything from government subsidies to private schools to credits on personal income for donations, which overwhelmingly favor Catholics and high-income taxpayers. But they are perhaps most glaring in physical structures. Even as Mr. Macron has pledged to nurture an “Islam of France,” followers of the faith suffer from an acute shortage of proper mosques across the country.

“It’s a total paradox,” Saïd Aït-Laama, an imam, said in an interview before Friday Prayer.

Unable to finance mosque-building themselves, generally unassisted by the state, Muslim communities have turned to governments abroad for help.

But that may now become more difficult under Mr. Macron’s new law, which is intended to combat Islamism by toughening rules on secularism and controls over religious organizations, including tightening the flow of foreign donations.

Last week, the government said that the new law would allow it to oppose the public financing of a large mosque in Strasbourg, in the eastern region of Alsace, where, for historical reasons, the construction of religious buildings can still qualify for government subsidies.

The interior minister, Gérald Darmanin, pressed the local government to cancel the funding, saying that the association behind the Strasbourg mosque had ties to the Turkish government.

Even before new law was drafted, the City Council of Angers used real-estate regulations last year to stop mosque leaders from turning to Morocco. A provision in Mr. Macron’s law would allow the national government, too, to oppose the sale of religious buildings to a foreign government if the French authorities consider the sale a threat.

Mr. Macron has said that the legislation is critical to fighting the kind of radical ideology that has sent French youths to fight in Syria and led to the deaths of more than 250 French people in Islamist terrorist attacks since 2015. Last fall, four people were killed in three separate terrorist attacks.

But critics say the law risks conflating Islamists with Muslims, who even leaders of the Catholic Church in France acknowledge have long been placed at a disadvantage.

Archbishop Éric de Moulins-Beaufort, head of the French Bishops’ Conference and the top Catholic official in France, said that the 1905 law had led to an “inheritance effect,” sometimes indirectly privileging French Catholicism even as it sought to institute a religion-neutral state.

Muslims who had immigrated from France’s former colonies but who had not been integrated into French society suffered a “great injustice,” Archbishop de Moulins-Beaufort said in an interview.

“We didn’t care at all about their religious needs,” he said.

More than a century later, the 1905 law’s effects are such that the government finances the upkeep of 90 percent of Catholic church buildings, according to the 2015 Senate report. By contrast, it owns and maintains 12 percent of Protestant buildings, 3 percent of synagogues and no mosques.

“There is considerable French hypocrisy on this point,” Thomas Piketty, an economist known for his work on inequality, said in an interview. “We pretend that the Republic doesn’t subsidize any religion, but the truth is we finance the renovation of religious buildings built before the 1905 law, which happen to be nearly all Christian buildings.”

Economists, including Mr. Piketty, and the Observatory of Religious Heritage, a private association, said that no overall data existed on how much taxpayer money was spent on religious buildings because local municipalities were in charge of their upkeep. The Interior Ministry did not respond to multiple requests for comment.

While local municipalities are required by law to service pre-1905 buildings, they can use their discretion to support other facilities.

In Angers, the city devotes about $770,000 a year to the upkeep of the religious buildings it owns, which include 10 Catholic churches, a synagogue and a Protestant church, as well as two facilities used by Muslims, including the former slaughterhouse. The two Muslim organizations using the facilities received a total of about $3,500 from the city last year, according to their leaders, who said that about 1,500 people regularly attended Friday Prayer.

The mayor, Christophe Béchu, declined interview requests. Catholic officials in Angers did not respond to multiple requests for information about attendance at Sunday Mass.

Mr. Piketty added that personal income credits on donations and the financing of semiprivate schools — most of them Catholic — funneled even more public money to Catholic organizations.

Under the new law, in compensation for the stricter financial controls, the government has said that religious associations will be allowed to generate income by leasing buildings they have received as gifts. Muslim groups are the least likely to benefit from this change because they have very little real estate, Mr. Piketty said.

“The very inegalitarian system that is already in place and that will be in a certain way reinforced by the bequest of buildings favors religions whose members are more well-to-do,” Mr. Piketty said.

Muslim communities can only raise private donations or turn to foreign governments for help in building mosques — with both options presenting obstacles.

That explains why, in recent years, many mosque construction projects across France have been abandoned or delayed because of lack of financing or suspicion of foreign money — not to mention resistance among local non-Muslims.

The members of the Association of Muslims of Angers resolved to build a mosque 40 years ago. In the early years, they gathered and prayed in basements and garages before the city provided access to the former slaughterhouse, said Mohamed Briwa, the group’s president.

Ground was broken in 2014 on a center expected to be large enough to accommodate 2,500 worshipers, financed by members contributing a total of $2.8 million. Feeling that the mosque could not be completed with local donations, leaders last fall agreed to give the building to the government of Morocco, a French ally, in exchange for its completion — though some members were opposed because donors had contributed on the premise that the facility would belong to the community.

Morocco and Algeria, two former French colonies, as well as Saudi Arabia, have financed the construction of about a dozen mosques in France, according to a 2016 report by the French Senate.

Like in other European countries that have suffered terrorist attacks, officials in France have grown increasingly wary of outside influences radicalizing citizens, especially through foreign-trained imams.

Nathalie Goulet, a senator of the center-right Union of Democrats and Independents who co-wrote the 2016 Senate report, said that while France must exercise stricter oversight over foreign-trained imams, there was no evidence that the mosques built with help from Morocco, Algeria or Saudi Arabia had led to terrorism.

Still, the decision by the mosque leaders to turn to Morocco came at the worst possible time — just before the three terrorist attacks last fall.

The City Council unanimously rejected the sale, citing real-estate regulations. But the mayor explained that the decision was also aimed at “keeping a neutrality that we need on our territory for the serene practice of an Islam of France.”

Silvia Camara-Tombini, a Socialist councilor, acknowledged that Muslim associations in Angers and elsewhere were in a Catch-22: While they were unable to raise funds on their own, France was making it harder to look for money abroad.

“Under the law,” she said, “there’s really no other way.”