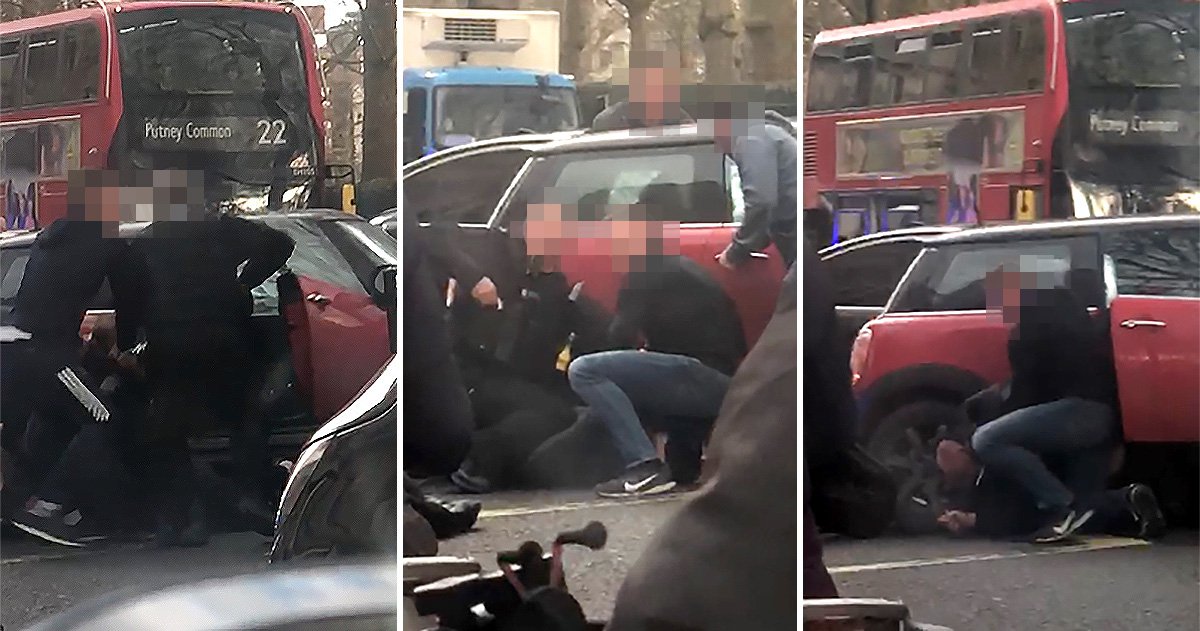 Shocking footage shows a suspected burglar being dragged out of a car after it crashed on one of London’s most prestigious streets.

Two men were arrested after a police chase ended close to the Ritz Hotel in Piccadilly.

A scuffle broke out as an undercover officer pulled a pair of suspected criminals from a red Mini.

The driver, who suffered a head injury, was arrested on suspicion of failing to stop, dangerous driving and commercial burglary.

The passenger was arrested on suspicion of commercial burglary.

Police used ‘tactical contact’ to stop the car, which crashed into railings.

Bystanders and other motorists then watched on as police fought to arrest the men, punching one repeatedly to remove him from the car.

Screams can be heard from a woman filming the operation unfold.

The incident held up traffic on the busy main road, which runs alongside Green Park close to Buckingham Palace and Mayfair.

Video shows how smoke poured from the front of the Mini, which was boxed in from behind by unmarked police cars that had chased them after they allegedly failed to stop.

The male driver is dragged from the car arms first by one officer while another jumps on top of the vehicle to scare the other passenger out.

Police officers in uniform also responded to the scene and handcuffed the driver.

The other man is pulled from the car onto his knees by two officers and dragged away from the scene.

The third passenger – a woman – was seen still sitting in the back of the Mini.

A spokesman for the Met Police said: ‘At 13:49hrs on January 27 officers on patrol in the vicinity of Waterloo Place, Westminster, had cause to signal for a vehicle to stop.

‘The vehicle, a red Mini, failed to stop and made off from officers.

‘It was pursued for a short distance before tactical contact was made by specialist officers, bringing the vehicle to a stop at the junction of Piccadilly and Brick Street.

‘The driver and two other occupants of the vehicle – a man and a woman – were detained.

‘The driver was arrested on suspicion of failing to stop, dangerous driving and commercial burglary.

‘The male passenger was arrested on suspicion of commercial burglary.

‘The female passenger was not arrested.

‘The driver sustained a head injury and has been transported to hospital for further assessment.

‘The male passenger has been taken into custody.’