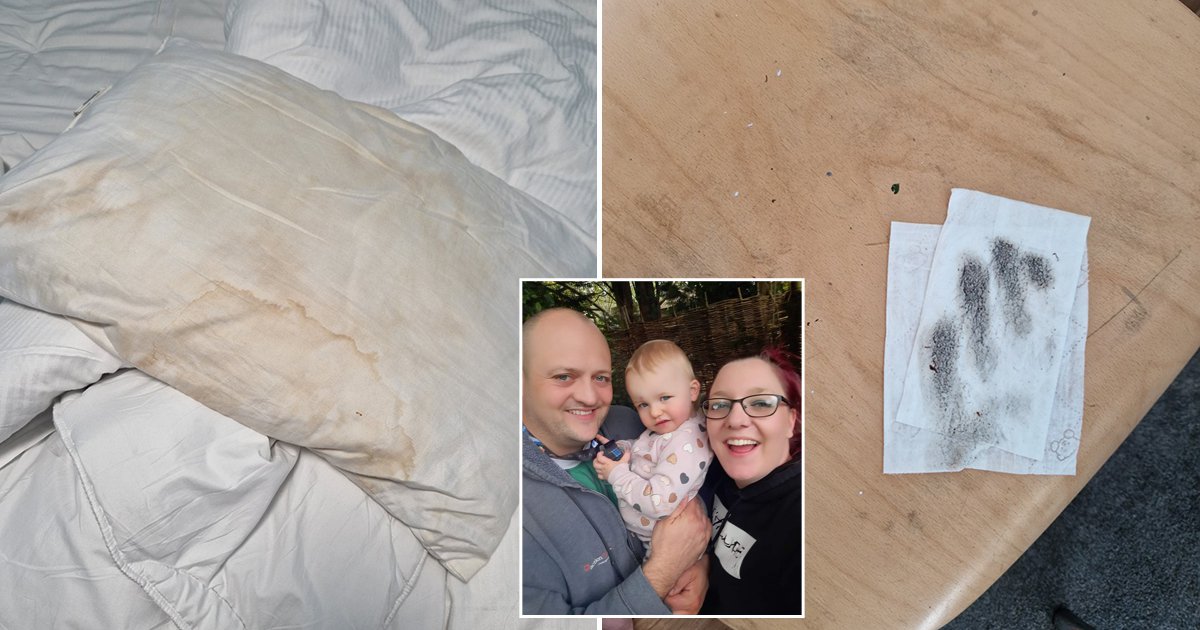 A Butlin’s guest has accused the chain of a ‘violation of basic human standards’ after pulling up the sheets in his room to find stained mattresses and a ‘yellow’ pillow.

Ben Spearing and his partner Chloe Cassie were ‘disgusted’ at the state of their room and bedding after checking in for a week-long stay at the resort in Minehead, Somerset.

The couple, who have a two-year-old daughter, also say a screw was sticking out of a wall at the resort, where summer holidays are advertised from £339.

They complained at the outset of the trip but feel even more aggrieved at the ‘horrendous’ discoveries as they packed up to return home to Surbiton, Greater London.

Mr Spearing, 37, has worked in hospitality for more than two decades and always strips the sheets when staying away from home.

He said Butlin’s staff did clean up and fix the screw after he complained but he is still unhappy with the basic level of cleanliness.

The holiday chain has apologised to its unhappy guest for the issues, which it has taken steps to address, and has reached out directly to the family.

Mr Spearing said: ‘Our room was disgusting. We had paint hanging from the ceiling in the bathroom and a big old screw sticking out of the wall in the bathroom while we had a two-year-old running around.

‘We spilt milk on the floor in the kitchenette and used a baby wipe to clean it up and it came up black.

‘The wooden chairs for the dining table were exactly the same.

‘After complaining to the service desk they cleaned the room, took the screw out and mopped the floor, but it still wasn’t great, we ended up having to clean it properly ourselves.’

Mr Spearing works as a chef and his mum used to be a housekeeping supervisor, so he is mindful of how he leaves rooms.

He paid £800 for the break in the seaside resort between July 29 and August 5 after finding a discount online but feels that even at the lower rate his family deserved better standards.

Mr Spearing said: ‘I just find it a polite thing to do for the cleaners as I know what a rubbish job it is to strip someone’s bed.

‘To see what we had been sleeping on that whole week was horrendous. The mattresses and pillow were stained with bodily fluids from previous guests.

‘I stripped our daughter’s bed first and my thought was, “my little girl has been sleeping on that for the past week”.

‘There’s no way you get stains like that in a few days, there were multiple stains in multiple areas – one of the pillows was basically yellow.

‘We appreciate we were in one of the cheaper rooms, but it’s a violation of basic human standards to have people sleeping on other people’s bodily fluids, especially with Covid.

‘We are just disgusted to think we were sleeping on that for seven days.’

Mr Spearing followed up his complaint to housekeeping staff after the family returned home from the coastal break.

On Friday, Butlin’s told him it would respond within 14 days.

A spokesperson said: ‘We are sorry about the issues Mr Spearing and his family faced on their recent break. We have strict cleaning and hygiene policies in place which we regret were not followed on this occasion and we have taken several steps to address these with our team on resort.

‘We’ve reached out to the family to discuss the issues in more detail.’