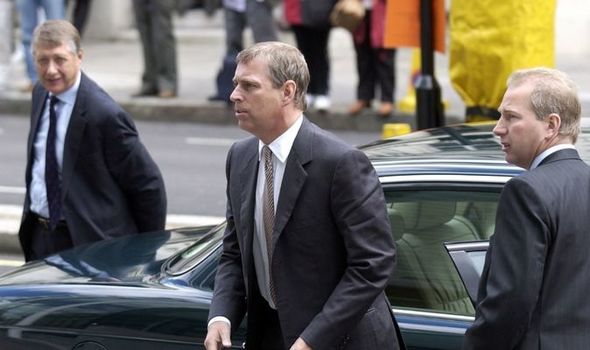 A review of the Duke of York’s taxpayer-funded police protection is likely to be launched soon by a Government committee. And there were calls yesterday for his security detail, which was scaled back two years ago after he temporarily stood down from royal duties, to be further cut or the cost covered by Andrew himself.

The ninth in line to the throne, who has been stripped of his remaining military affiliations and royal patronages and told he must no longer use the style His Royal Highness in an official capacity, is facing further humiliation.

And his legal team were expecting to learn this weekend if members of his family will be ordered by a US court to give evidence in a civil damages case brought by Virginia Giuffre, who claims she was sexually assaulted by Andrew when she was 17.

Princess Beatrice is said to be preparing to be called as a witness. It was a birthday party that she went to at Pizza Express in Woking that formed the plank of the Duke’s alibi when he was interviewed on Newsnight in 2019.

Lawyers for Andrew’s accuser Ms Giuffre say they plan to seek depositions from two British witnesses, who are people “close to Andrew who would have knowledge of his actions”.

The legal team had a deadline of last night to file what is known as letters rogatory, requesting assistance from the English courts to require witnesses in the UK to give evidence.

Andrew’s former wife Sarah Ferguson and his other daughter Princess Eugenie are expected to be among the witness requests.

David Boies, one of Ms Giuffre’s lawyers, has indicated those he would seek to question “might include his ex-wife” and could even include his brother Charles.

Ms Giuffre, 38, claims she was forced to have sex with Andrew when she was a minor under US law in London and New York, and when she was 18 on Little St James in the US Virgin Islands.

Andrew, 61, vehemently denies sleeping with her while she was controlled by his friends, the late paedophile Jeffrey Epstein and Ghislaine Maxwell, who was convicted last month of sex trafficking.

Media lawyer Mark Stephens said the Duke now had no choice but to reach an out-of-court settlement with Ms Giuffre to limit the damage to the Royal Family.

He said: “Andrew has to settle. His position is bad, he’s reputationally done – particularly now the Royal Family have essentially pushed him into a locked and unheated turret in Balmoral.

“The only thing he can do is throw himself on the grenade Judge Lewis Kaplan threw and take the hit for the wider family. That means we won’t be talking about his trial rather than the Queen’s Platinum Jubilee.”

It came as councillors in York are calling for Andrew to relinquish his Duke of York title. It was bestowed on him on his wedding in 1986.

As Andrew began his new life as a private citizen yesterday, a government minister refused to confirm whether he would continue to receive taxpayer-funded protection.

Security Minister Damian Hinds said: “Our security forces, the police and others, do what they judge is necessary to protect our country, to protect people in it.” He believes it is a “long-standing principle that we don’t talk about who and how in particular”.

However, Dai Davies, a former head of royal protection at Scotland Yard, said a review of Andrew’s security, which he estimated at £2million before police pensions and other costs, was inevitable once the Queen’s second son had settled down to his new life.

Dickie Arbiter, a former press secretary to the Queen, said Andrew might still require police protection around the perimeter of his home at Royal Lodge in Windsor but he predicted a review of his Scotland Yard police bodyguards.

He added: “They’ll have to look at his close protection if he stays at home and never goes anywhere.” Buckingham Palace refused to say if the Queen might step in to help Andrew pay for his own security.

But he is thought to have access to more money than is often speculated so may be able to afford it.

He has been paying for his daughters’ security since their taxpayer-funded protection was cut after 2009 when it became clear they were never going to be working members of the Royal Family and were intent on careers.

Graham Smith, of Republic, a group that campaigns for an elected head of state, called for Andrew and other royals apart from the Queen to pay for their security.

He added: “Why should we be paying? The job of the monarchy is to give us one head of state – we don’t need to be giving security to all of them. Lots of celebrities and other high-profile people pay for their own security.”