Almost 15,000 people have backed a petition to name a new Type 26 frigate after him – a campaign the Daily Express is supporting. A former First Sea Lord says it would be a “fitting tribute for an extraordinary life of service”. The Duke served in the Navy during the Second World War. If the plan goes ahead, the ship would escort the aircraft carrier Queen Elizabeth around the world.Backing the campaign, Former First Sea Lord, Admiral Lord Alan West, said “Everyone would know the ship has been named after him. “As a Navy man, it would be a fitting tribute and a wonderful thing.

“Three of the Type 26 frigates are being built, the first of which is HMS Glasgow.

“The fourth ship to be built, of the group of five, should be the Duke of Edinburgh. That means it will come into service in 2030.

“And that also means one of his great-grandchildren, even though they would still be quite young, could do the launch.

MP Tobias Ellwood, chair of the Defence Select Committee, also backed the Daily Express crusade, stating: “It would be a fitting tribute for an extraordinary life of service.”

Philip began his naval career at the Britannia Royal Naval College, in Dartmouth, in 1939, where he won two prizes for being the best cadet.

He began active service as a midshipman in 1940, and by 1942, he had risen to first lieutenant after bravely fighting in the Battle of Crete and the conflict at Cape Matapan.

The battle took place in the Mediterranean, south-west of Greece, in March 1941, when Philip was just 20 years old. A young naval officer, he was praised for his actions aboard the battleship Valiant in the decisive fight against the Italian fleet. 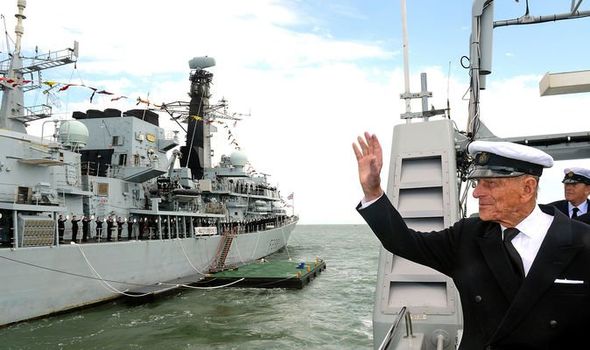 The Duke had been in control of the searchlights as the ship battled an Italian cruiser when he spotted an unexpected second enemy vessel nearby.

If the naming goes ahead it would not be the first time the Navy had an HMS Duke of Edinburgh.

It was the lead ship of the Duke of Edinburgh-class armoured cruisers built in the early 1900s.

During the First World War, the ship was involved in pursuing German battlecruiser Goeben and light cruiser Breslau.

She was also at the Red Sea protecting Indian troops.

The ship was transferred to the Grand Fleet in December 1914 and participated in the Battle of Jutland in May 1916. She was not damaged during the battle and was the only ship of her squadron to survive.