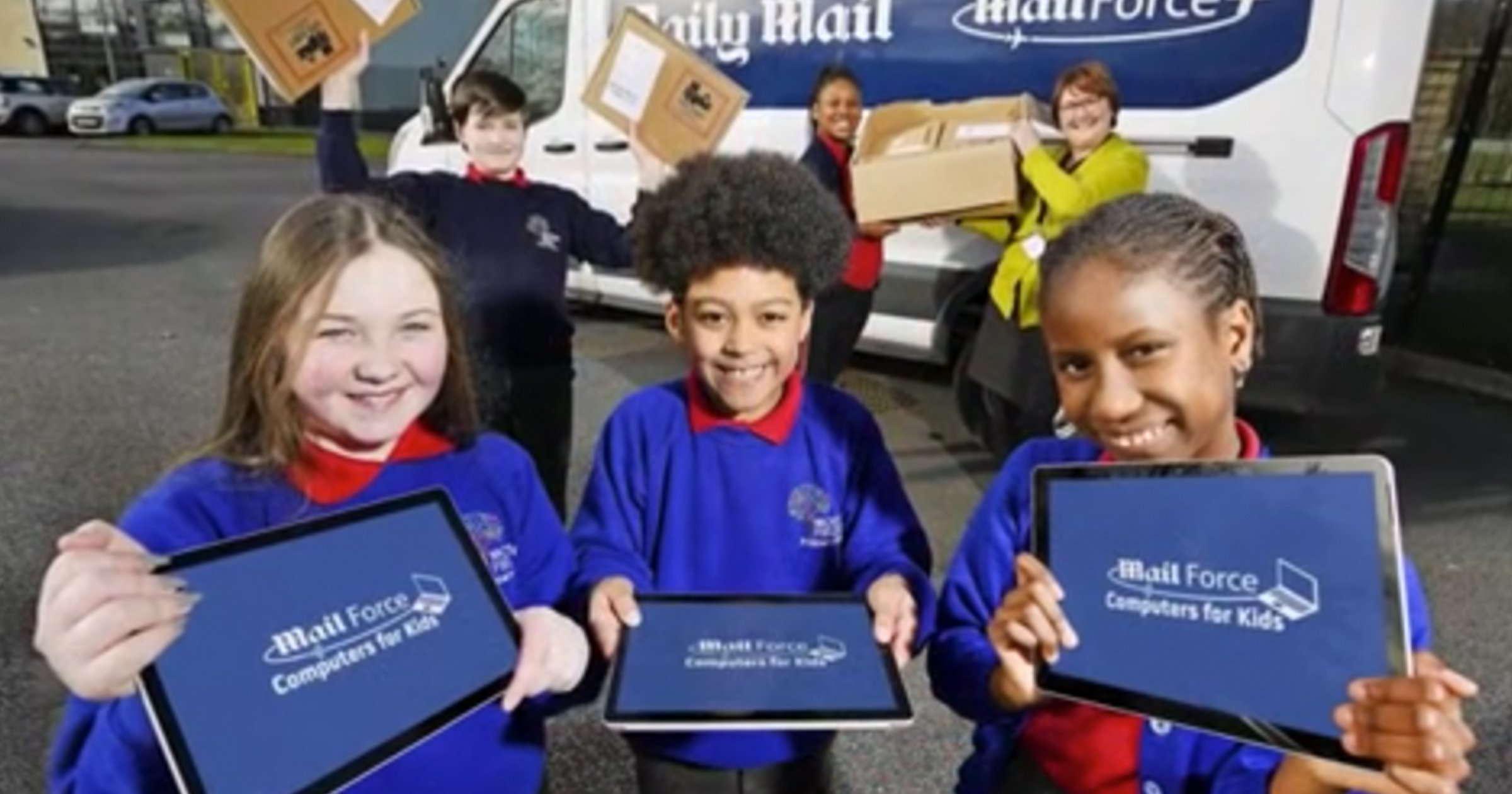 A campaign to ensure pupils stuck at home during lockdown can get the ‘education they deserve’ has got off to a flying start.

The coronavirus outbreak has seen the majority of children back at home and dependent on online learning, exposing a deep ‘digital divide’ across the country.

A recent poll by the Daily Mail says a third of families don’t have enough computers for all of their children, while schools are struggling to plug the gap.

But after just 16 days of the newspaper’s Computers for Kids campaign, more than £10million was raised or pledged in donations of cash and laptops by hundreds of businesses, organisations and readers.

If your workplace has old laptops to get rid of, the Mail Force charity will be able to have it professionally refurbished for around £15 to pass to a family in need.

Famous faces throwing their weight behind the campaign include David Walliams, David Beckham, Stephen Fry, Naomi Campbell, and Andrew Lloyd Webber, who all star in a fundraising video.

Former England football captain Beckham can be heard explaining how ‘millions of Britain’s children need us to take action’ in the mock-up Zoom meeting.

Stephen Fry adds: ‘Action to make sure they get the education they deserve.’

Beckham then says children should not be ‘isolated from their friends and their teachers’, at which point party host David Walliams accidentally kicks him out and says: ‘Oh no, I think I’ve just cut off David Beckham!’

The campaign shot past the £10million mark when the Crown Prosecution Service pledged 6,500 laptops, all lightweight ThinkPads made by Lenovo.

They are worth worth at least £3million altogether and have been wiped clean ahead of their new lives.

Many organisations have been meaning to upgrade their equipment for some time anyway, so this campaign was the perfect time to do so while helping the country’s neediest children.

Big names including Lloyds, Sainsbury’s, Santander and Dixons Carphone have donated laptops worth around £1.4million altogether.

Meanwhile more than 24,000 readers have donated around £1.5million, with philanthropist Sir Tom Hunter chipping in £500,000.

Cash donations of £3.1million have been provided by a number of companies such as Camelot, Boohoo and The Hut Group.

On the Mail’s Virgin Money Giving page, a donor named Jacqui wrote: ‘Thank you Daily Mail for bringing this important issue to our attention – kids need computers! Simple as that.

‘Having worked in education and with a passion for technology, especially during this pandemic, this was a no-brainer for me.’

Mary Manning added: ‘I don’t have any interest in owning a laptop. I’m one of that generation who prefers to do things the old way.

‘However, I do realise the world would be unable to perform without all the up-to-date computers.’

The campaign is in conjuction with the Department for Education’s efforts to supply 1.3million devices to children who need them.

Mail Force has also pledged to supply brand new computers and is looking at other ways to improve online access for pupils.